Spinach Chowder: or, It's the simple things sometimes

Ever had a recipe come across the electronic wires that you just had to try out? 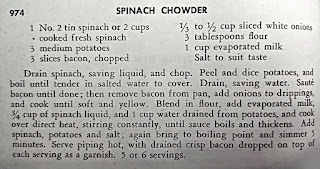 We had some difficulty obtaining our title ingredient. Grocery shortages and bare shelves have become a fact of life these days, but some of the shortages befuddle me. This week, it seems there has been a run on frozen spinach. Usually, those green bricks remain unpurchased and ignored until they have a healthy coat of frost. But today, only one lonely block of frozen spinach remained in an otherwise empty freezer. Is there a spinach recipe making the reposting rounds, or is this just yet another sign that no matter how much we try to insist otherwise, we are not Back To Normal?

But let's set our apparently sought-after frozen spinach aside for a moment and have a look at the other principal ingredient in this recipe: spuds! 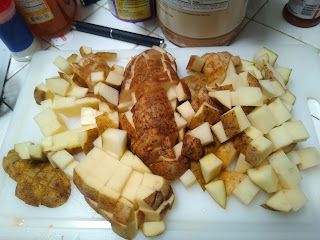 You may notice I didn't peel the potatoes. I could claim excuses about the vitamin content of potato skins, but really I just didn't feel like bothering. I hate peeling raw potatoes. Also, you end up throwing away a lot of the spud no matter how good you are with your paring knife or vegetable peeler. Instead, I like to just pick the skins off after the potatoes are cooked.

But I didn't think of removing potato peels until after I had the cut the the spuds into (embarrassingly uneven) dice. I wasn't going to pick through all those tiny little boiled spud cubes and take off the skins. Therefore, regardless of how slovenly the soup may look, we are making a soup with dreadfully unpared potatoes.

After that bad knife job, the time had arrived to cook the spuds. I almost never boil potatoes; I usually microwave them instead. You can't tell the difference by the time they've become mashed potatoes, gotten encased in a stealth-gelatin potato salad, or whatever spudly delights I had planned. But this recipe has us reusing the cooking water, so they forced me to bring out a pot instead of just putting a potato in the microwave. In retrospect, I hope this recipe didn't mean three of those comparatively little red potatoes. Based on the spud cubes overtopping the pot, I may have underestimated the size of the specified "three medium potatoes." 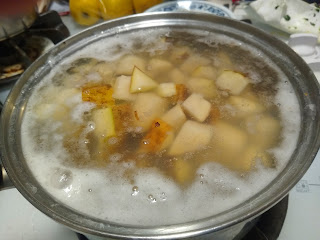 I managed to pour the entire steaming-hot mess into the big spaghetti pot without scattering any potato cubes on the stove. I'm actually a bit surprised- usually I spill things everywhere when attempting maneuvers like this.

While the potatoes merrily simmered, it was time to get out the next ingredient: bacon! Despite the vegetable shortage, the grocery store had a fully-stocked wall of bacon to choose from. You would think that in this once-in-a-lifetime stressful era, everyone would buy up all the bacon long before they stripped the frozen vegetable shelves clean.

When I was wee, my mother almost never cooked bacon. It took a long time before I found out that precooked bacon is not the default choice. I used to look back and think she was simply trying to reduce our intake of all things sweet or buttery. After cooking bacon for the first time in years (it's been so long I forgot to set out that all-important plate with paper towels on it), I think she might not have wanted to deal with the long-range grease splatters and an utter mess of a frying pan. And no matter how well you air out the kitchen, the smell of bacon just will not get out of the house. No amount of strategically placed fans could dislodge the pork-and-saltpeter miasma in the kitchen.

In a happy accident, the potatoes were perfectly cooked at the same time the bacon was finished. Also, apparently boiled potatoes are rather nice on their own. People kept plucking them off of the plate I set them on. (A lot of the bacon obviously also vanished when I wasn't looking.) Now, the recipe has us cooking the onions in the bacon fat. However, the recipe writers probably assume we only have three bacon slices' worth of drippings in the pan because that's all they asked for in the ingredient list. To prevent greasy soup, I poured most of the fat out of the pan and left just enough to cook the onion in. 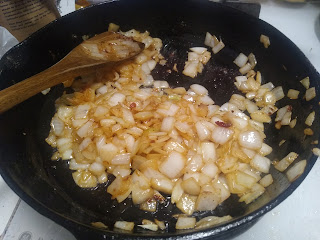 I chose not to cook the spinach at all. Frozen spinach is already a bit mushy, and I thought that cooking it would turn it into colorless slime. So, this is what our title ingredient looks like after draining it as specified in the recipe. It really does look marvelously enticing, doesn't it? 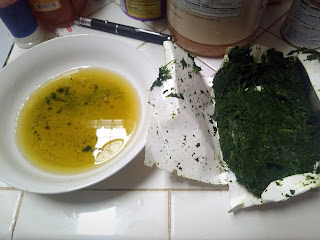 Anyway, now that we've got all our ingredients respectively boiled, fried, sauteed, and squeezed, it is time to actually put this together. Our next step is flour. 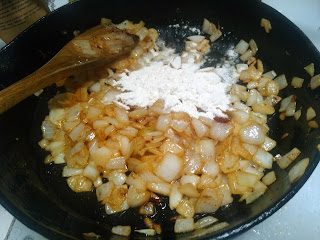 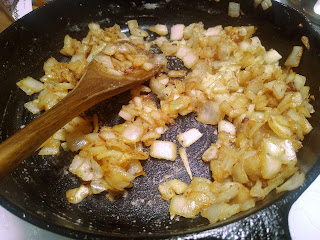 I know I poured off most of the bacon fat, but adding the milk made everything look like a greasy mess. 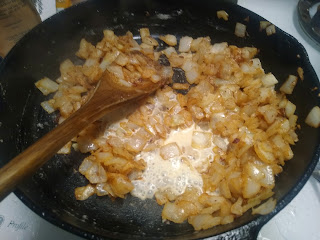 The recipe has you adding just enough milk to turn the flour into an unpromising onion-infused paste. To this, we add the fluid that we squeezed out of the spinach.

Here one must confront how very severely this recipe looks bad before it looks good again. You start off with steamy potatoes, crispy bacon, and golden onions. The kitchen smells wonderful and everything looks so tempting. Then, without the warning you should have gotten, you have a frying pan full of onion paste. But it soon gets better again- after getting the spinach juice mixed in, we had what looked like surprisingly good onion gravy. Our recipe was starting to look tempting instead of terrible. 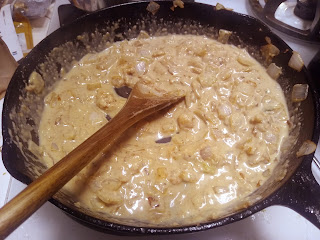 Only one thing remained to add to the gravy before we put the non-liquid ingredients in: the potato water. The recipe says to add one cup. I saved twice as much in case we wanted to add more at the end of the recipe. After all, this potato water is the reason I didn't just microwave the potatoes instead of boiling them. However, forgetting that I had saved a pint of potato water instead of a cup, I dumped all of it into the pan all at once, turning the soup almost irreparably watery. 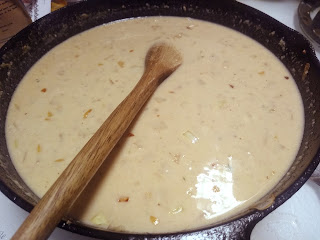 To fix this, I quickly dumped in some mashed potato flakes to hopefully thicken things back up. 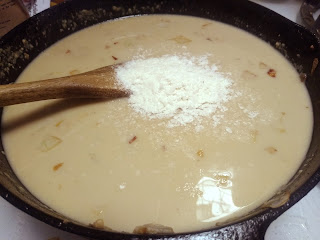 As a historical note, I would like to share with you that before we stirred the instant mash into the pot, we had accidentally reenacted a recipe from Miss Leslie's Directions for Cookery in its Various Branches.

If you want to recreate mid-nineteenth century recipes with modern convenience foods, you can dump instant potato flakes onto a plate and tell people it's "potato snow." If you like, you can think of potato snow as a quick bonus recipe. If anyone  has the nerve to serve potato snow to other people, please share how it went!

Back to the today's adventure, we had too many potato cubes to continue the recipe in the skillet. To my own surprise, I managed to pour the overflowing contents of this pan into the big pot without flooding the stovetop.

After all is mixed, the only thing left is to put the spinach into the spinach chowder! It landed in the pot in a decidedly unappetizing green clump. Even now that I'm old enough to eat chicken that is not in the form of dinosaur-shaped nuggets, I have to say that frozen spinach needs a lot of help before one would be willing to eat it. Some vegetables freeze and thaw perfectly nicely, but spinach turns into... this. 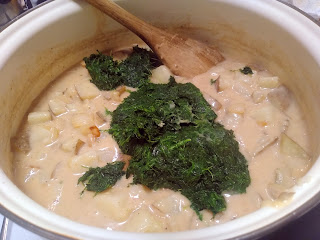 As we gave the soup its five minutes of simmering time, someone said "It smells like broccoli-cheese in here." Which, despite this recipe's unfortunate dearth of cheese, it did. I'm not sure where the cheese smell came from, but it was extremely present. 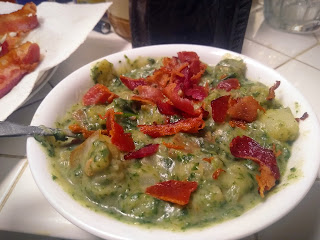 And here the soup is, with the bacon on top! It's very rich and very satisfying. As aforementioned, I poured off most of the bacon fat, but the soup had that peculiar richness that makes you think someone melted a whole stick of butter into it. As previously mentioned, I ended up using only half the specified amount of spinach due to grocery shortages. So this was really a rich potato chowder with enough spinach to turn it green. I don't know if it was better or worse this way. Would the other half of the spinach have made it better or turned it into something that tastes like someone's grimly telling you to eat  your vegetables? We can only find out by making it again.

We all agreed that it would benefit from a bit of cheese stirred into the pot right before you take it off the burner. But with that said, this tastes like is has scads of butter and a bucket of cream in it despite containing neither. I think it's because the bacon flavor from the onions pervaded the soup even though I poured almost all of the grease off.

We did, however, make one quick addition to the soup that remained in the pot. This sausage was one of those things that got defrosted earlier in the week and then forgotten,  but it went perfectly with everything else. 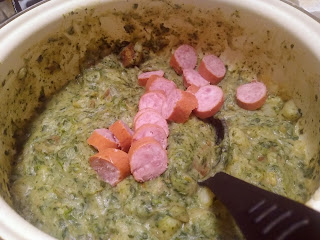 Despite this recipe's surprisingly high demand of counterspace (there is a lot of "cook this ingredient and then set it aside"), I would definitely make it again. It's such a rich vegetable soup that with a bit of meat (or protein of your choice) it would be a really good complete meal. We were also contemplating stirring in some cheese the next time we make it. Because there will be a next time.

However, one should note that the soup thickened a lot overnight. The next day it was more like spinach-infused mashed potatoes than a chowder. 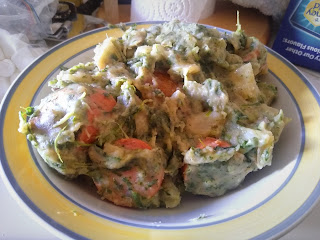