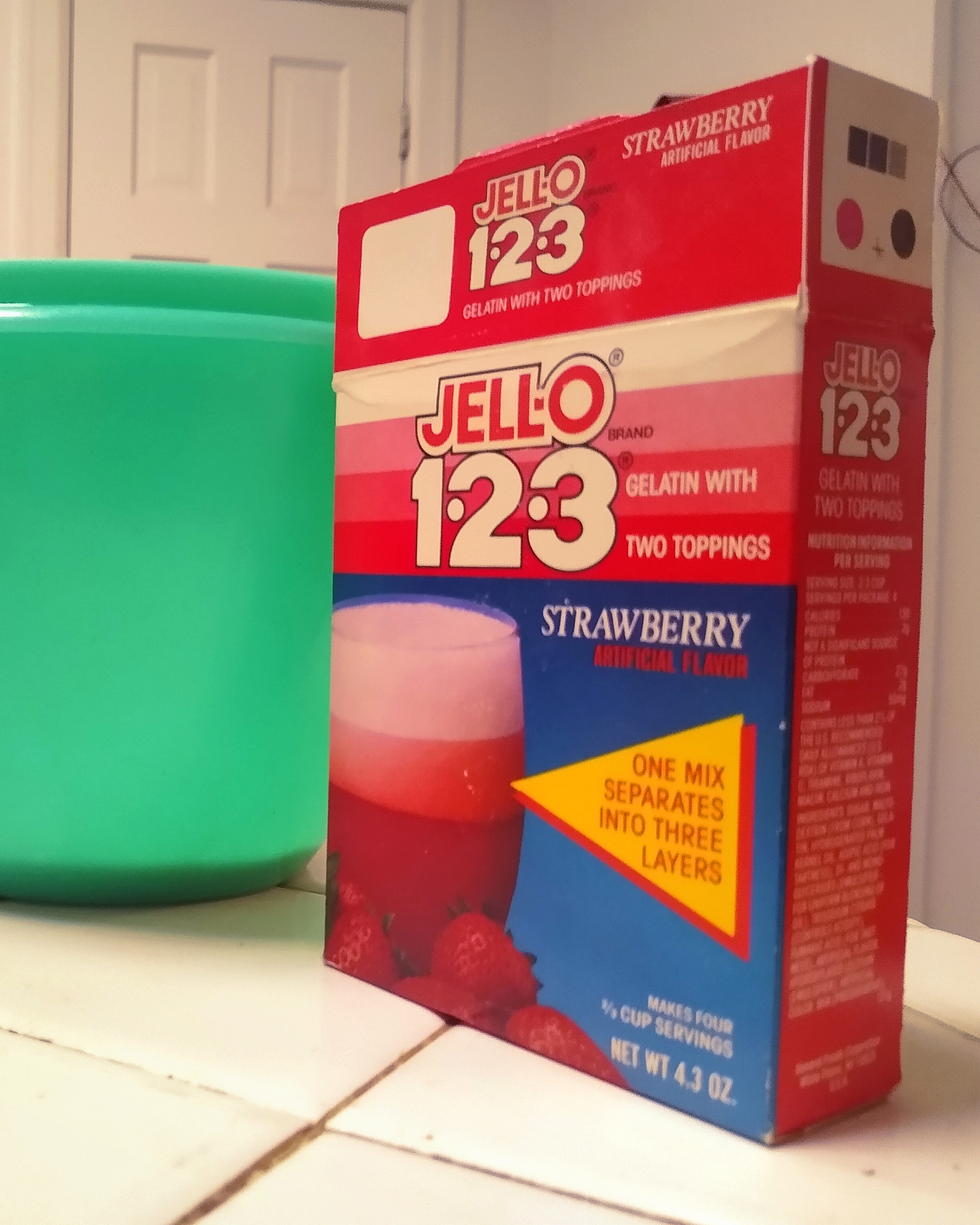 Today's adventure begins with something innocuous:

Yes, jello! Someone else in the house randomly craved a box of the stuff, and it was both easy and cheap to make. This soon led to encasing canned fruit in gelatin, which is benign creation but also the gateway to terrible and jiggly times. 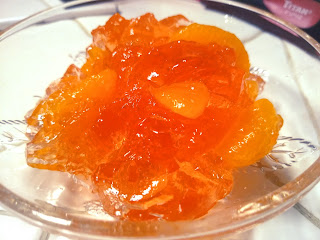 It turns out that making the fruit properly float in the gelatin is a matter of careful timing. If you put the fruit in too early, it will just sink to the bottom of the bowl. If you wait too long, the gelatin will completely set and you can't get the fruit in it. You have to keep checking it every quarter hour or so, hoping it has reached that perfect "egg white consistency."

If you're like me, you will forget all about your congealing salad until it is too firm to accept the fruit, but there is a way to fix it. You can just microwave it, stirring after every ten seconds, until partially melts. It'll look kind of chunky on top, but who cares?

Here is the innocent beginning of our gelatin voyage. Don't the suspended fruit slices look like they're swimming in a strange aquarium? 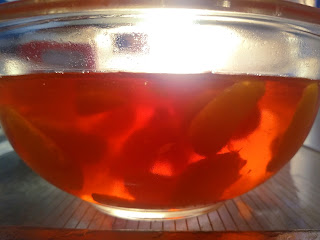 As much as I remain dumbfounded at serving gelatin as a "salad," I had to admit that the gelatin-suspended fruit was an unexpectedly perfect side dish for the pot roast we had that night. I highly recommend fruit suspended in Jello when when you're serving pot roasts- the light, cooling dessert (or salad, if you prefer to call it that) is a perfect counterpoint to the rich, heavy main dish.

Also, and I am not the first to note this, gelatin extends the life of nearly-expired fruit by at least a few days. If those last uneaten strawberries are starting to look a little wrinkly, they will remain fresh for another week if you put them in gelatin.

Perhaps detecting future jiggly schemes, others in the house said "This is so good, it's the only gelatin you should ever make!" Despite the hopeful tone in their voices, we were just beginning our congealed journey. Other dear acquaintances who don't even live in the same state saw the ill-advised future already firming up in the refrigerator. 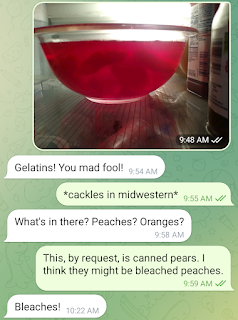 They were right to be worried. Scavenging the back of the pantry, we found some forgotten crushed pineapple. The can had no rust, so we decided it must be safe for human consumption. This led to the creation of a Hawaiian Fruit Salad. As you know, in the world of processed foods, "Hawaiian" means "contains canned pineapple." 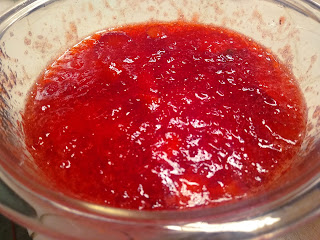 The fibrous canned pineapple embedded in the gelatin made it feel like you were cutting into a steak. The shreds of pineapple itself had no flavor in them (I may have over-enthusiastically squeezed the excess juice out of them), so they did nothing but get stuck in one's teeth. No one wanted to eat the Hawaiian Fruit Salad. It was discreetly given to the raccoons.

But all of that is a warmup for what turned up in a recent pantry excavation: 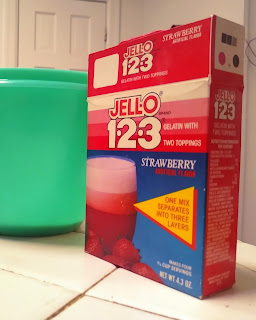 Yes, we found an inexplicable box of Jello 1-2-3, a product that has a small yet devout nostalgic following long after it was discontinued. It seems a lot of people remember Jello 1-2-3 as the first thing they ever made and served to their family. A lot of people online reminisce about how they felt so grown up when they ritualistically poured the mixture into wineglasses and later brought them out of the refrigerator for dessert. 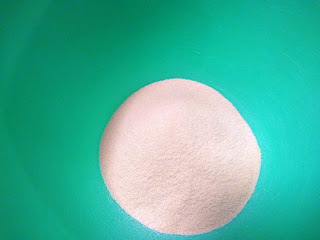 Jello stopped making 1-2-3 in the previous millennium, so this is definitely one of the less well-advised things we have reconstituted. I didn't expect it to be any good after who knows how many years (although the box had no expiration date), but I wanted to see if it really did that magical layer separation promised on the box photo.

The camera really doesn't show the bright pink that appeared when we reconstituted the powder. It was the same color as the plastic they use in Barbie accessories. 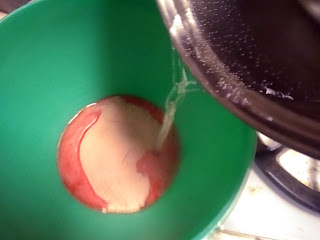 I'm not going to dwell on the foul stench that conquered the kitchen. There's nothing surprising about a box of 30-year-old gelatin product expiring and lightly decaying in the many decades in which it was ignored in the pantry. But I would be remiss not to mention the olfactory attack at least once. Also, despite smelling distinctly like long-expired milk, this product is dairy-free.

And so, with the kitchen timer counting down the two minutes specified on the back of the box, we inserted the electric mixer. The directions say we should use a blender if possible, but I didn't feel like gathering all the blender parts from the various drawers in which they reside. 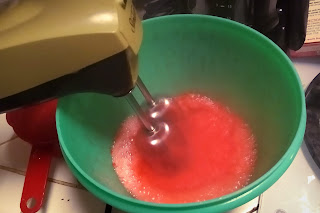 From here, the instructions are quite straightforward. First, your about half of the mixture amongst the random transparent glasses you have chosen from the cabinet. Then, you go back pour the rest of it, filling each glass in the same order as the first time. I didn't know why we're supposed to do incrementally pour it instead of just dump it out. But I figured that unless I go out and deliberately pay for another box of expired gelatin, this will be the only chance I get to make this fabled discontinued product. 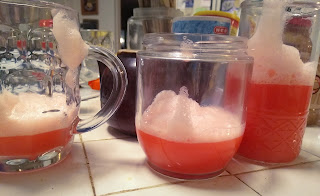 The Jello 1-2-3 didn't really have three layers immediately after pouring. If you count the beer-like foam on top as a layer, you could say it had two. I thought that perhaps it separates into three layers as it sits, but it did not. I guess it sort of had a middle layer if you looked closely enough.

Here they are, all firmly set and ready to throw out! The camera's autofocus actively sabotaged my attempt to document this historic culinary event. Also, I don't know why this stuff looks like it is a tasteful salmon color in all the pictures. I promise, it was the same color as the girl's section of a toy store. 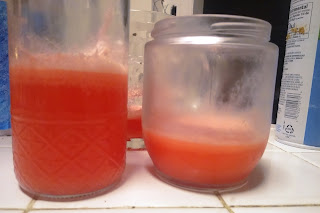 The middle layer is really the foam on top as it partially sank into the gelatin beneath. You will notice that unlike the three-tiered confection pictured on the box, we really have two stripes on top of a translucent pink mass. Since it's a bit hard to see in the photographs, here it is in MS-Paint: 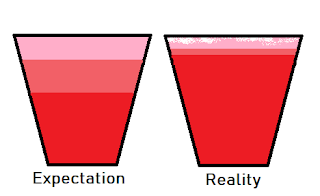 If we peep into this from the top, it looks like dense pink cobwebs. 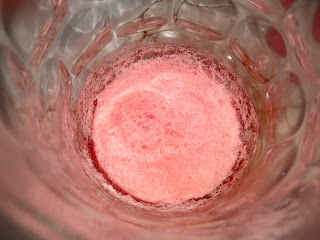 If we pretend this is edible and scoop some of it out (and after it spent who knows how many years of putrefying in the pantry, you'd be foolish to try), it looks like you made a normal box of Jello with milk instead of water. As aforementioned, smelled exactly like extremely putrid milk. I double-checked the ingredient label, and this product contains no dairy derivatives. I wonder what non-dairy substances smell just like expired milk after spending at least 20 years in the pantry. 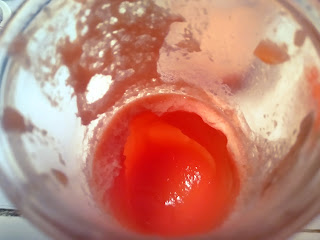 Lastly, here's what it looked like in motion! This may be the only video of Jello 1-2-3 in existence. A lot of people have made homemade-ish reconstructions (often involving a box of modern-day Jello and a tub of Cool Whip) and filmed it, but this is the actual prefabricated original in all its jiggliness! Apparently gelatin retains its power long after the natural and artificial flavors have decomposed. Anyway, this is both the rarest food-related event yet documented on A Book of Cookrye, and proof that I should not be the one documenting it.

As a final note, I compared the ingredient labels of both the Jello 1-2-3 and a box of normal, non-expired Jello that we had. The only major difference is that 1-2-3 had maltodextrin in it. So if anyone reeeeally wants to recapture what has long ceased production, and the new recipes just don't do it for you, try obtaining some maltodextrin and adding a spoonful to an otherwise factory-standard box of Jello.

I have to reiterate two things in closing. First, none of the previous photos capture how synthetically pink this stuff was--- but you can finally see an honest show of the aggressively pink color in this photo of the splats that dripped from the bowls into the dishwasher. 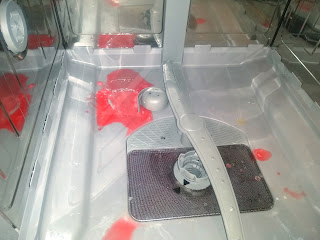 Second, this really did smell like thirty year old expired food. When I heard the dishwasher start draining, I hastily turned on the kitchen faucet to flush the drain in the sink and make very sure that the foul steam coming from the dishwasher didn't have a chance to re-stink the kitchen.

In closing, we at A Book of Cookrye do not recommend attempting to reconstitute food products from the last millennium.