We at A Book of Cookrye are no strangers to paying for services with the fruits of the oven. Heck, I may have only graduated high school because I kept bringing in pastries when teachers were finalizing grades. When one of the people in the house gave us an automotive assist, I asked what his favorite pie was. The answer was "something with chocolate."

I thought to myself that I own a whole book of chocolate recipes in which the perfect pie waited to be made, even if I don't have the book at hand. But with great pleasure, I can tell you that my dearly beloved chocolate book, Maida Heatter's Book of Great Chocolate Desserts, is available for free on the Internet Archive! Granted, you have to "borrow" their copy for one hour at a time instead of just opening the book page you want and propping your laptop up in the kitchen while you cook. But one hour is plenty of time to do some recreational recipe browsing and write down the one you have in mind. 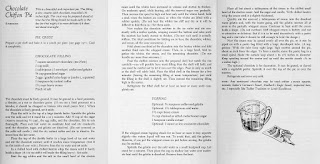 It may be daunting to see a recipe that runs for three pages, but that's because Maida Heatter writes out her instructions in very fine detail. Her recipes read like she's patiently explaining everything to someone who's nervously making their first ever batch of cookies. You get the idea that even if your most ambitious baking attempt so far was a birthday cake made from a box of mix, you could easily follow her thorough instructions and make the seven-layer Hungarian torte regardless of whether you've seen the word torte before.

Maida Heatter sold me on the recipe with the first sentence: "This is a beautiful and important pie." That makes the pie sound perfect as compensation for services rendered, don't you think? The last time we made a gelatin pie that involved folding whipped things into the filling, it was unnervingly bulletproof. But this recipe is from the most sacred book of chocolate, and therefore more likely to be edible. I've previously mentioned that I asked a friend of mine who makes duct tape art to make a cover for this that says THE HOLY BIBLE.

I've never had a recipe from this book go wrong. So I wasn't unnerved when the gelatin turned into this wrinkled skin on top of the milk when I scattered it as directed. 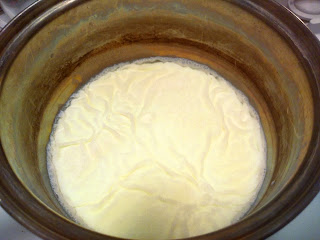 We don't have a double boiler, though I've been meaning to check the thrift shops for some decent stainless steel bowls you can just set on a pot. But we do have this diffusion thing, which I've often used under vats of spaghetti sauce.

I actually think this part of the recipe would be perfect for doing in a microwave, but I wasn't going to risk all these ingredients for that kind of experimentation. But I think the microwave is ideal for a lot of delicate saucepan operations that would easily burn. For example, these days I always scald milk in the microwave because it simply cannot scorch onto the sides of the bowl like it would in a pot. (It does boil up a bit high though, so one needs a large bowl to prevent a mess.)

But for now, the stovetop diffuser would have to suffice. 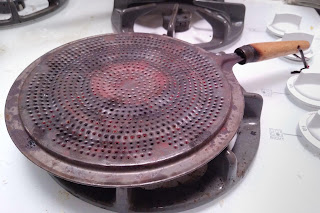 I haven't read Maida Heatter's recipes in a while, and sometimes her writing style sometimes seems a bit persnickety. She begins with "The chocolate must be finely ground." Like, she's not telling you, the cook, to grind up the chocolate. She just imperiously decrees in the first sentence that someone had better come up with a grinder before proceeding with the recipe. I did not do that. Yes, we have a food processor, but it's a bit of a dishwasher primadonna. All the pieces of it demand a lot of rack space. I just used chocolate chips instead. 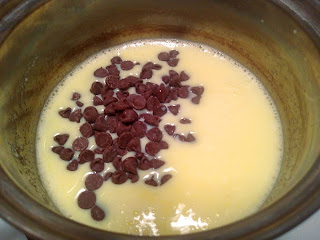 I thought the chocolate chips were small enough to easily melt, but maybe I should have listened when Maida Heatter said I should grind them. They soon coalesced into one chocolate wad. I feared that the egg yolks would be long scrambled before the big blobs of chocolate melted. 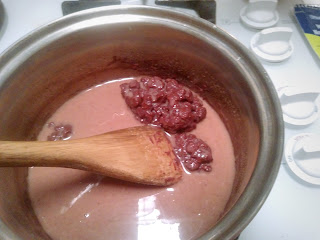 But fortunately, with a lot of patience (and while turning the burner as low as it gets) we got the chocolate to melt. This yielded us a big pot of something about halfway between a really rich hot chocolate and hot fudge sauce. 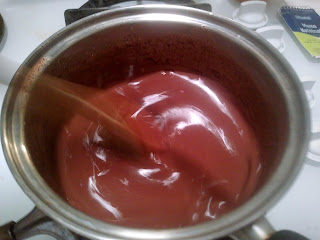 Sometimes I read recipes like this and realize that perhaps I don't have the kitchen that the recipe writer thought I would. The book tells us to put the pot of chocolate into ice water. We do not have an ice maker in this house (it seems that wherever I go, the water line that's supposed to go to the refrigerator has problems that would involve tearing out the kitchen floor to fix), and I did not want to purchase ice just to deliberately melt it. The best I could come up was a basin of tap water. Had I planned ahead, I could have set the basin in the refrigerator a few hours before beginning the recipe. Unfortunately for my iced or chilled water needs, I had only given the recipe a quick skim when I was writing out this week's grocery list. 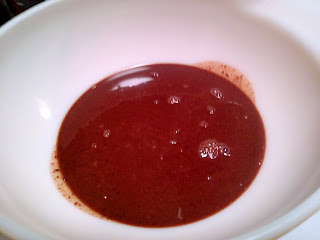 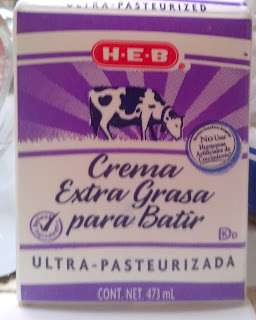 I spent a bit too long trying to get the egg whites to beat up into at least semi-peaks. I know the recipe says you want them to barely stand up at all, but these were barely thicker than gravy. An extended beating changed nothing. On the bright side, we discovered that the stand mixer at top speed is so loud you can't talk over it. In other words, if someone else is in the kitchen being inconvenient, you can turn the mixer up to its fastest speed and drown them out. 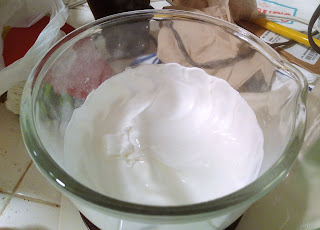 The recipe confused me at this point, mostly because I thought the whipped cream was supposed to go on top of the pie rather than in it. I had to reread it several times before I figured out where this was going. During that time, the gelatin in the chocolate had turned transformed it from a rich pudding to a slithery chocolate Jello mold. 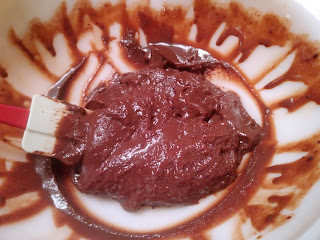 Apparently one should neither dilly nor dally after getting the chocolate off of the stove. I didn't think we had enough gelatin in this to set it at room temperature, but I already knew how to fix it. As we have discovered when making all our lovely fruit "salads," you can microwave the gelatin for ten seconds at a time, stirring well every time. Eventually, it will be un-set but not melted, and your chocolate chiffon pie can proceed. Just don't tell anyone that you had to use the microwave to undo your gelatin failures. Or, if you're like me, proudly tell everyone how you averted disaster with the same machine you used to reheat last night's spaghetti. Every good dish benefits from an unsolicited speech about how you nearly ruined it. 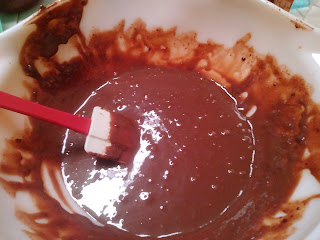 Anyway, I hope everyone has all their bowls of mixtures at the same consistency because it's time to mix everything together! First, we dump about a third of our re-melted chocolate stuff into the bowl with the egg whites and try not to swoon over the chocolate stripes that swirl artistically about it. 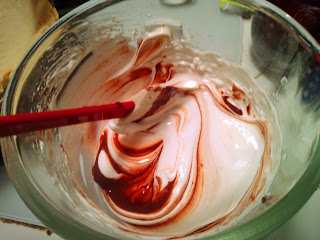 Second, we put another third the chocolate into the whipped  cream and try not to deflate it too much while folding. Remember, we are not stirring, we are folding. Stirring would deflate the whipped cream. At this point, the intended recipient of the pie came in and tried some of the chocolate that remained in the main bowl. His eyes widened a bit and he simply said ".....whoa." We gave him a heavily loaded spoon to wander off with. 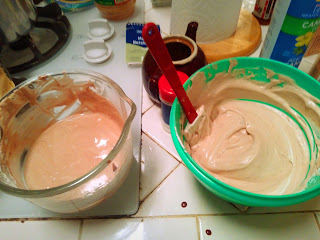 As we got this pie together, we once again faced something that Maida Heatter recipes do a lot: use every bowl in the kitchen. She must have had a commercial dishwasher in her kitchen, perhaps even two of them. As much as I've loved every single one of her recipes that I've tried, the sink fills up quickly when you're cooking from Maida Heatter's Book of Great Chocolate Desserts. Therefore, I suggest you pick a recipe very carefully unless you either have a dishwasher or someone who volunteered to do the dishes for you. 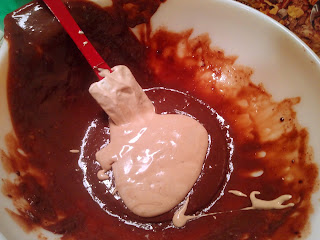 If you follow Maida Heatter's instructions to have the chocolate and both bowls of fluff at the same consistency, you can indeed achieve great heights. The pie filling threatened to overtop the crust, and we still had a smidge extra. 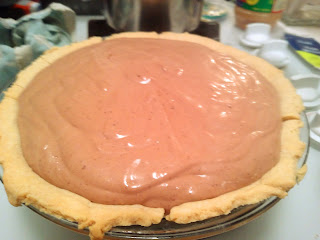 So that we could sample the pie without waiting for the entire massive pie-load of chocolate to firm up, we poured the little bit of extra pie filling into the nearest convenient cup and put it in the refrigerator alongside the main attraction. 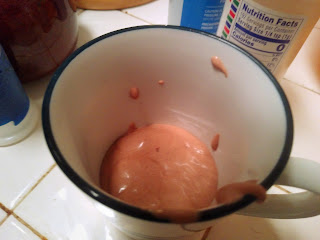 And... this pie is exactly as beautiful and important as Maida Heatter promised. It is delicious, chocolatey, and magnificently rich. If you're just making this for the house, you might cut the recipe back and make a smaller pie though. I tried to delicately hint that we should give some away, because this is a lot of chocolate. However, my gentle suggestions to get at least part of this pie out of the house were met with a possessive glare while someone grabbed the pie pan in one hand and a fork in the other.