Raisin-Coffee Cupcakes or, Finding recipes instead of repairs

Not to get into a typewriter detour again, but they are why I found today's recipe. I was flipping through this person's typewriter repair blog admiring all the pretty pictures of antique machines getting rescued from rust and grime. It's so satisfying to see these derelict machines get taken apart, cleaned for the possibly the first time in this millennium, and then brought back to life.

On a recent post, she said that her mother had typed the family cookbook on a typewriter just like the one she was currently fixing. She then provided a sample with the note "Midcentury recipes are a window into a mysterious time." With that introduction, I expected something a lot more strange than this:

Before beginning, we had to type out the recipe. Other people can cook with a laptop in the kitchen, but I am too splatter-prone to risk it. I thought it would be cute and rustic to type the recipe in White-Out on a scrap brown paper that was used as padding in a recent delivery. This method of typing may yield photogenic results, but it doesn't work very well and is hard to read.

This recipe is a window into a mysterious time? Not a gelatin mold with whipped cream, fruit, and olives? Not something from the brightly-illustrated pamphlet of exciting ways to serve American cheese and mayonnaise? The only possibly mysterious thing about this cake is the inclusion of coffee-soaked raisins. Granted, the use of shortening instead of butter in cakes has declined a little in recent years, but it's not a mysterious ingredient from bygone days. If no one was using shortening at home, grocery stores wouldn't give it so much shelf space.

And so, we commence with soaking raisins in coffee. The coffeepot contained a surplus from earlier today, and I didn't think stale coffee would break the recipe. But in case hot coffee would help soften the raisins faster, I popped it in the microwave for a bit. 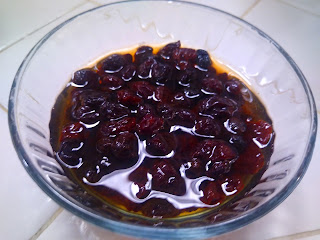 While the raisins got a spa-grade caffeine immersion, we moved on to the mixing bowl where everything was white. I thought about using butter, but we still have shortening leftover from the green velvet cake that crowned the Saint Patcaken. 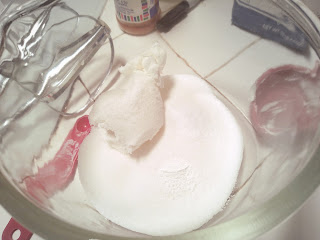 That white is so unnaturally perfect we could advertise it as "scientifically pure." Before adding the egg, I tasted the synthetically white contents of the bowl. It tasted like knockoff Oreo filling with added grit from the sugar. 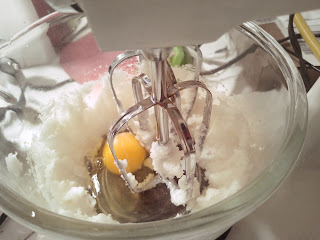 At least the egg made it look less preternatural. Heck, the resulting yellow looked downright cheery. 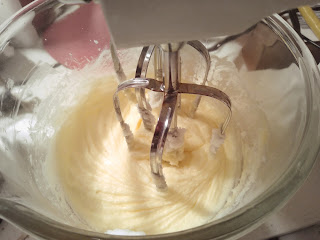 Unfortunately, I can't go around to some random stranger's house and ask what their mother meant when writing out a recipe. So, I went with the easiest option. 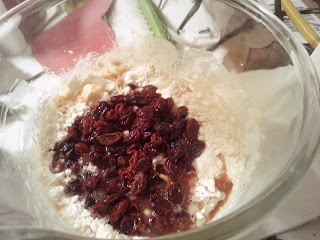 After a short time in the unstoppable stand mixer, we had a competent-looking cake batter. It tasted like we had added a lot more complex multilayered flavors than raisins, coffee, and a tiny allowance of cinnamon. We didn't even add vanilla. Also, this cake batter tasted decidedly old-fashioned. It also tasted like it should be in a bundt pan instead of cupcake papers. 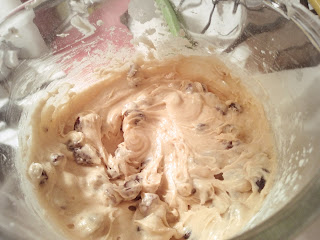 Speaking of old-fashioned things, we have previously mentioned that older cupcake pans seem a lot smaller than new ones. We halved this recipe, so we should have gotten one dozen. Instead we got five. 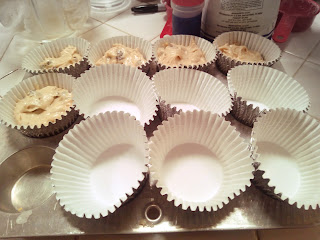 After getting half as many cupcakes as the recipe promised, I thought the recipe typist didn't know how to measure a cupcake. I revised that theory after these needed a lot longer than the 20 minutes claimed in the instructions. Meaning, the oven heat had to penetrate a lot more cake batter per cupcake than the recipe writer allowed for when giving the baking time. Our cupcakes baked for twice as long as originally intended. 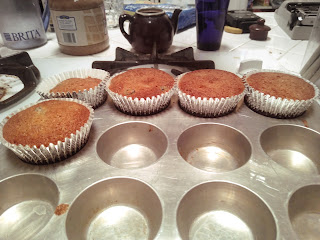 I mixed the glaze as originally written, and it was, shall we say, a bit runnier than I expected. The recipe says to moisten the powdered sugar with coffee, not dissolve it.  But using the ingredient amounts specified in the recipe, this happened. 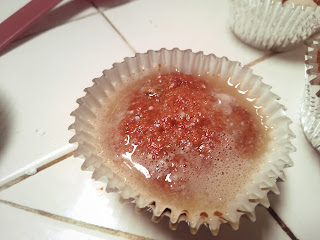 The syrup completely soaked in after a surprisingly short time, leaving only a suggestive glisten on top. 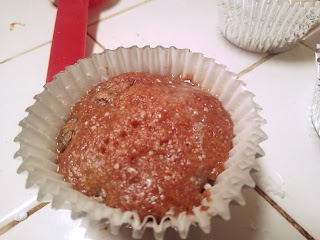 We wanted to fix the erroneous icing and put a lovely-looking topping on the cupcakes. Drawing on previous strawberry cake experience, we did not attempt to add powdered sugar to the icing until it thickened. As we have learned, you have to dump half the bag of the stuff into the icing before you see a difference. Instead, we dribbled the icing very slowly into a fresh bowl of sugar.

We very easily got a lovely glaze, but in retrospect we should have made just a little bit more of it. Also, as we later learned, some people dip cupcakes in glaze instead of trying to drizzle it on. That probably would have looked better than, um, this.

If we look at a cross section, these cupcakes came out perfectly. You'd think baking cupcakes for forty minutes would ruinously dry them, but you need to trust that toothpick when you jab it into the cake. If it comes out wet, regardless of how long they've been baking, just let them remain in the oven until they are officially done. 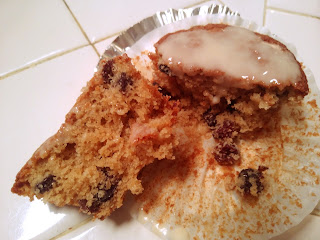 At this point I kind of want to tentatively retract my misgivings about the uselessly runny "glaze." The ingredient amounts seemed even more incorrect after it completely soaked into the cake. But that meant the entire cupcake was infused with coffee-flavored syrup. Some of it soaked right into the tops of the cupcakes. The excess syrup ran down the sides and puddled at the bottom of the paper lining, where the cake absorbed it and  took on a lovely coffee flavor on top of everything already in it.

Apparently a lot of bakeries nowadays squirt syrup on their bare cakes before icing them, so maybe this recipe is ahead of its time. Also, the runny "glaze" that soaked into the cupcakes made it easier to ice them without (gasp!) crumbs. Or at least, it would have been easier to ice them had I bothered to get out a piping bag and do this properly. 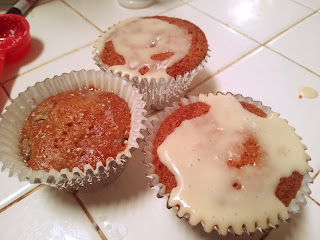 Despite the short ingredient list, these cupcakes have a really interesting, complex flavor that suggests that you spent a long time delicately balancing the spices that went into them.  I thought they would taste strongly of coffee, but you can barely recognize it- and that's if you already know it's there. We have already typed up this recipe (this time with actual ink) to keep it.
Posted by S. S. at 7:17 AM