Sugar Cookies: or, Nutmeg is the key to antiquing any recipe

You should know that the recipe printed immediately below this one is "frizzled dried beef."

I always found the name "sugar cookies" to be very nondescript. Don't (almost) all cookies have sugar? Calling these "sugar cookies" is like calling a recipe "flour cake" or "sugar candy." But today's cookies have another ingredient that almost automatically dates this recipe to well before the turn of the millennium: 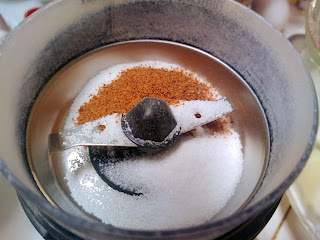 You just don't see nutmeg in latter-day recipes unless you're making something heavily spiced. The nutmeg we purchased was as coarse as coffee grounds, so we decided to use power tools to turn it into a nice, grit-free powder. 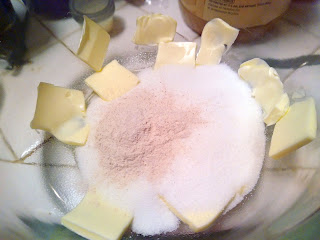 I'm sure "Helping the Homemaker" was not aimed at the sort of homemaker who could afford an electric mixer in 1933, but if I was a competent homemaker I would have remembered to soften the butter. Since we live in a time when mixers turn up in thrift shops at prices that don't require a lady to convince her husband that the monthly payment is worth it (especially since we presumably would already be sending Singer a monthly payment for the sewing machine), I just let the mixer bash the cold, hard butter pieces around until they gave in.

Now, we move on to the cream. We don't keep cream on hand from which to draw the occasional culinary spoonful. And since milk is homogenized nowadays, we can't just carefully pour cream off the top of it like someone presumably would in 1933. So, the last time we bought cream I froze a tablespoon of it away for this recipe. There is some online dispute about whether freezing cream is advisable. Many people in various forums and comment threads get very anguished at the thought. But, I figured such a small amount of freezer-ruined cream would not be the downfall of this recipe. Did you know that when frozen cream melts, it turns into curds and lumps? 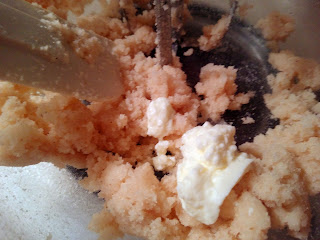 I decided to quietly hope that the unexpected cottage cheese would dissolve into the cookie dough. After adding the egg and then letting everything mix for perhaps far too long because I like watching the bowl spin, we still had little curdules that looked like they might never go away. I usually don't fret over this. When we only have half the ingredients mixed together, you're going to have a sweet sludge instead of a cookie dough. Besides, most miscellaneous tiny lumps seem to dissipate when you add the flour. Our lumpy cream-curd soup did taste really good, though. 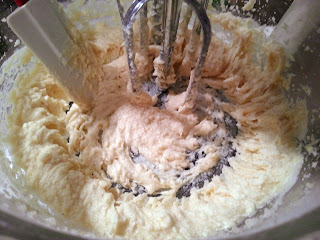 Moving on to other ingredients, I think grinding the nutmeg into an extra-fine powder helped release the flavor and disperse it throughout the dough. It also eliminates spice grit and prevents unnerving-looking dark flecks that make your cookies look like you accidentally knocked the pepper shaker into the mixing bowl.

After we've gotten the flour mixed in, the instructions tell us to chill the dough and then break off small chunks of it to bake. No doubt this is the perfect way to make these cookies if you are a busy homemaker and have a million other things to do, but we at A Book of Cookrye decided to make them look a little nicer and neater. The recipe claims to yield thirty cookies, which means we should get fifteen since we halved it. 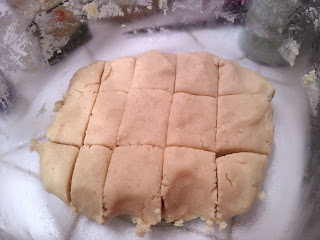 Because I suspected this dough would become rock-hard in the refrigerator, I shaped the cookies before baking them. To keep it simple, I rolled them into balls and then flattened them with my hands. This cookie dough had the same consistency as Play-Doh, which made me wonder why we're supposed to chill it first. Usually you chill cookie dough if it's a bit drippy at room temperature, lest it melt into a hot dough puddle while baking. But I wasn't going to argue with "Helping the Homemaker." They're the ones who got a newspaper distribution deal with their recipes.

"Helping the Homemaker" tells us to bake these for 12 minutes in a moderate oven. How can they give us such precise down-to-the-minute baking times? I know this recipe is from 1933 when most of us could only dream of an oven with its own thermostat and temperature dial, so I'm not mad about the relatively unspecific instruction to bake in a "moderate oven." But since giving an exact oven temperature would alienate most of the homemakers who are seeking help on the Fort Worth Star-Telegram's women's page, the recipe writers could have at least helped a homemaker by telling us how the cookies should look when they are done. Are they supposed to be golden on top, or remain the same color? Are they supposed to puff up and then fall a bit? Are they baked as soon as they stop spreading? 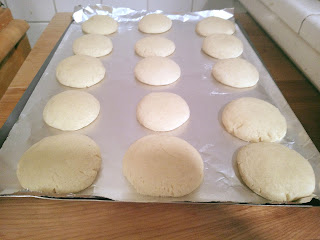 I have an unfortunate history of baking cookies far too long because I can't trust that they're done. With that in mind, I decided to prevent dried-out disappointment by removing them from the oven at twelve minutes sharp, regardless of how underbaked they appeared. The cookies looked a little pasty, but I thought perhaps they're meant to. After all, the Reese's chip cookies looked raw after baking as specified, and they turned out perfect after cooling down.

Then I broke a sacrificial test cookie open and found a doughy, almost-baked interior. So, I put them back into the oven until an ever-so-slightly toasty smell came from the oven. They may look unchanged on top, but they were just a teensy bit golden underneath. 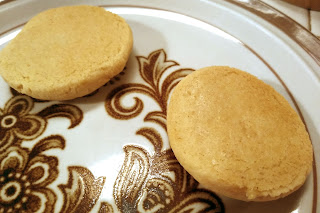 Maybe my oven wasn't the right type of moderate. I've always thought "moderate means 350°" ever since I saw this chart in the Dormeyer book:
Perhaps for cookies, I should have twitched the oven dial up to 375° or so. Since cookies are so small, you can bake them hotter than big things like layer cakes. But since I didn't think to bake these a bit hotter, extending the baking time made them perfect. Or, if they were not perfect, they at least were baked properly.

I really did like these cookies, and so did everyone else. One person ate a cookie, paused for a really long time, then finally came up with the words "Yeah these are really good."

I liked the subtle addition of nutmeg. It was just enough to add a bit of extra flavor, but not so much that it announced itself in a blaze of pumpkin-spice glory. If you want to make any recipe taste like you got it from your (great-)grandmother, apparently all you have to do is add a soupçon of nutmeg.

The cookies were really soft, but firm enough to just drop into a cookie jar without crumbling. This is a theme I've noticed with cookie recipes of a certain age: apparently well-stocked cookie jars were a real thing and not just the stuff of rose-tinted fiction. A lot of cookies today are either so soft they turn to a pulp if you squeeze them too hard or so crispy they shatter into crumbs if you shake the package. But a lot of cookie recipes that I've clipped from old sources, whether crispy or soft, are sturdy enough to just drop into a bag and give away-- or dump into a cookie jar without worrying about the ones on the bottom getting squished and crumbled under the weight of more cookies on top. 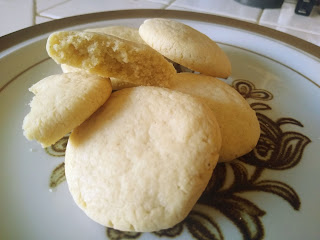 So, I really recommend this recipe. If you do not keep cream in your icebox (or electric refrigerator) and do not wish to purchase a carton of it just to use a spoonful or two in a cookie recipe, why not mask up and go to the nearest coffee shop? They might be so bemused at the request for one table of cream to go that they may let you just have it.

A few weeks later, someone did me a very big automotive favor, and I knew just the recipe to make in thanks. However, since we had no more cream, I substituted in a spoonful of Irish cream from the Saint Patcaken. While the raw cookie dough tasted like the liquor, the flavor almost completely baked out of the cookies. What tiny whiskey flavor remained wafted out of the cookies overnight; you couldn't tell the difference unless someone told you beforehand that the cookie dough was lightly spiked. I put a dozen cookies on a paper plate which I then put in a gallon-sized bag (this kind of packaging ensures that no one will feel even slightly guilty about returning the container). The answer: "I'll help you next time if you bring more of those cookies!" 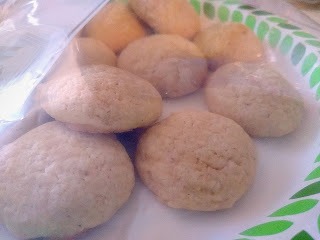