Belgian Onion Pie: or, I've wanted this for far too long

It has been far too long. 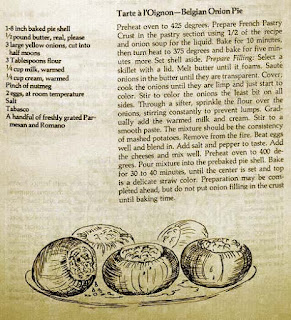 There are some things you miss more than you ever thought. You see, others in the house just do not like onions at all. Only the most discreet eighth of a teaspoon of onion powder is permitted before discouraging words are far more than seldom heard. And fresh onions? That's fresh onions plural? Absolutely not.

The deprivation drives me to madness. I miss the tear-jerking pungency of raw onions. The mellow sweetness of gently-sauteed onions. The almost-acrid kick of onions so browned they're nearly black. Eventually, one snaps and makes an entire pie full of onions. This brings us to Belgian onion pie.

Unlike nearly everything else in The Cotton Country Collection, the Belgian onion pie has no Mrs. Her-Husband's-Name under it. Whoever wrote it down used rhapsodic language. Clearly, someone delighted in taking the time to gently warm the milk and cream- and all the other many fussy steps in the recipe. Half-moon onions? A pie the color of delicate straw? I also love the "real, please" that goes with the butter on the ingredients list. It's at that perfect intersection of polite and yet witheringly nagging. 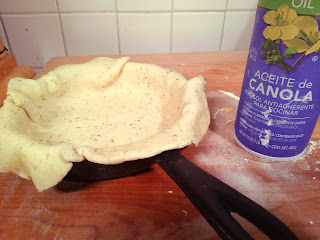 I used the same spices in the pie crust as the pie itself, plus thyme and a generous shake of onion powder. The dough was so good that I wanted to make crackers out of the extra dough I cut off the sides. But no one came here for pie crust. We're all here for the pungent things in life. Does this look like a half-moon onion to anyone? 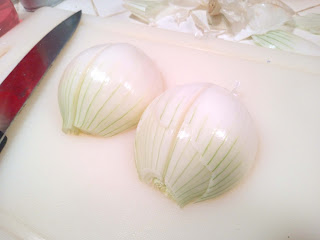 The onions barely fit in the pan I first tried to cook them in. Was I going to regret my choice of pie pan? I couldn't go back and put the crust into a bigger one; I had already started baking it. 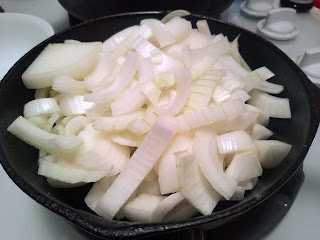 After a bit of time pushing the onions around with a wooden spoon, we covered the skillet to let them cook "until slightly colored." Since I couldn't see through my lid (which was actually just foil), the onions cooked well beyond "slightly colored" and ended up firmly in "taco platter" territory. I had to pluck out the ones that threatened to go from caramelized to burnt. Apparently onions cook a lot faster than I thought. 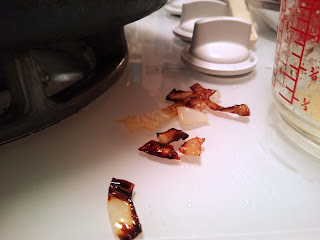 I should here note that I am not making this recipe with nothing but the book to guide me. Taryn from Retro Food for Modern Times made this for the Pieathlon (I'm the one who sent it). She noted that this recipe uses, and I quote, an "Everest of butter." She went on to note that she cut back on the butter before she started cooking, and that she still had to drain off a lot of surplus grease. So, following in her footsteps and experience, we used only one-fourth of the butter the recipe demands- though it is "real, please." You will notice that the severe butter reduction has not injured the onions.

You may think that I cut the onions into appallingly unrefined chunks. But I didn't want delicately minced onions in this pie. Also, I didn't want to spend a long time working over a cutting board. 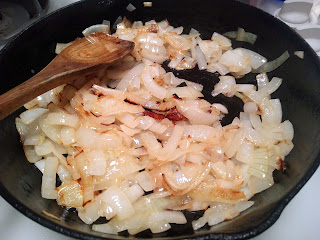 For the longest time, I thought this recipe looks too daunting to attempt. I'd read and reread the instructions when flipping through the book, wondering if I would ever be good enough to make a Belgian onion pie. In reality, once you look past the gushing-yet-persnickety tone of the instructions, you're just making white gravy with onions in it, adding an egg so it sets in the oven, and then baking it.

I thought sifting the flour over the onions seemed a bit unnecessary, but it really did forestall a lot of hard-to-get-rid-of flour lumps. So I'm glad I got out the tea strainer for this step. For that matter, I'm glad a tea strainer is at hand. As I told myself as I got it out of the drawer: when you do all the extra little steps that seem pointless, you can blame someone else if the recipe goes wrong.

At this point, I started to wonder just how much they tested this recipe before committing to the ever-so-lyrical instructions. First, we didn't just halve the butter, we quartered it. Then, we had to double the milk and cream before the onions turned into the "smooth paste" the recipe claimed we should have. Granted, I was too lazy to warm the milk and cream before adding them, but I figured they would get heated up near-instantly in the pan anyway.

The point is, we drastically changed the amount of every ingredient except the onions and eggs. Did someone send the recipe in, hoping the cookbook Committee (always capitalized) would print it in the book and thus do a slow-burning act of kitchen sabotage on anyone who made it? 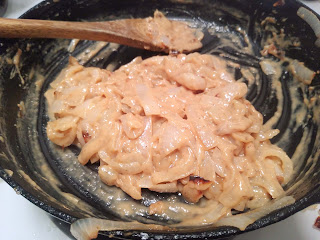 After the stovetop excitement subsided, we only had to stir in the egg and seasonings, at which point I managed one of the best feats of domesticity I've pulled off in a long time. I'd placed the crust in the oven right before I started this whole butter-and-onion business, and the crust was perfectly baked as I removed the frying pan from the burner. I only had to remove the pie shell from the oven, dump the pie filling in, sprinkle some uncalled-for green onions on top, and return the now-filled pie to the oven before the pan had a chance to get cold. 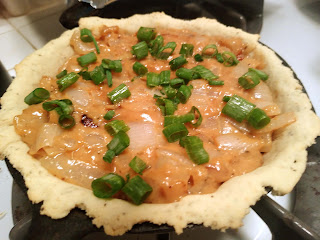 The recipe's direction to bake until the pie is "a delicate straw color" was useless since we had already browned the onions to the color of rude hay. Instead, I baked the pie until I could shake it without anything moving. I also put the crust scraps on a pan next to it in the oven. If you're going to do this with the extra crust (since it's already seasoned and everything), don't forget to shake some salt on top of them before baking. If I had remembered, they would have been so good I would have made them on purpose without bothering with the rest of the pie. But since I forgot to salt the aspiring crackers, they were unfortunately bland.

Meanwhile, the pie itself had puffed up a lot in the oven. To my surprise, it stayed puffed after it cooled. It also cut a lot more neatly than the onion-paste had suggested it would before baking. 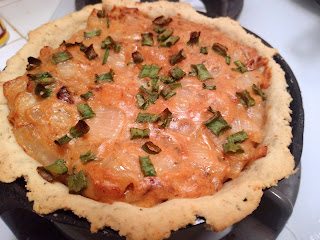 If you like onion soup, this pie is absolutely made for you. Imagine a sliceable onion soup encased in seasoned crackers. Between to stovetop cooking and the long baking, the pungency bakes out of the onions, leaving a mellow, sweet flavor.

However, this pie is very rich. When Taryn made the recipe, she made little cupcake-pan pielets instead of one pie, and that honestly is what I would suggest. This is too rich to serve up in pie slices unless you cut very narrow triangles. But if all of your friends have gotten the vaccine and you're all getting together, little baby onion pies would make for some very nice cutlery-free food. Most people would be sated after just a little bit anyway. 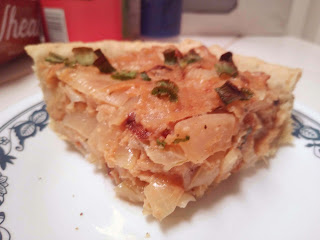 I was told that I should not rush to make this pie again, but nevertheless we might want to keep the recipe on file. It's kind of how like how even if one likes cheesecake, one probably wouldn't want a big piece of it every day.

With that said, the real credit here goes to Taryn of Retro Food For Modern Times who realized that this recipe was grossly overbuttered. I would have just made the recipe as written, pressing on in the face of surplus grease, and thinking it would be all right in the end. I would have then blamed myself when the finished pie turned out to be nothing more than a mess of onions and drippy melted butter. But forearmed with the knowledge that most of the butter should just not go in this recipe at all, we actually got a really good pie out of this recipe.

I will close by noting how everyone else was confounded by the notion of an onion pie--- not because it seemed like an overwhelming amount of onions, but because the idea of a non-dessert pie was utterly foreign to them. Based on their responses when I proposed it, you would have thought I had asked if anyone else would like me to stir chopped onions into a vanilla cream pie. When I served it, everyone who tried it (and nowheren near everyone was interested in a pie full of onions) ate the first bite with trepidation. This was quickly followed by relief. "Oh, so it's not a dessert!"