Persian Fudge: or, You had me with the recipe name 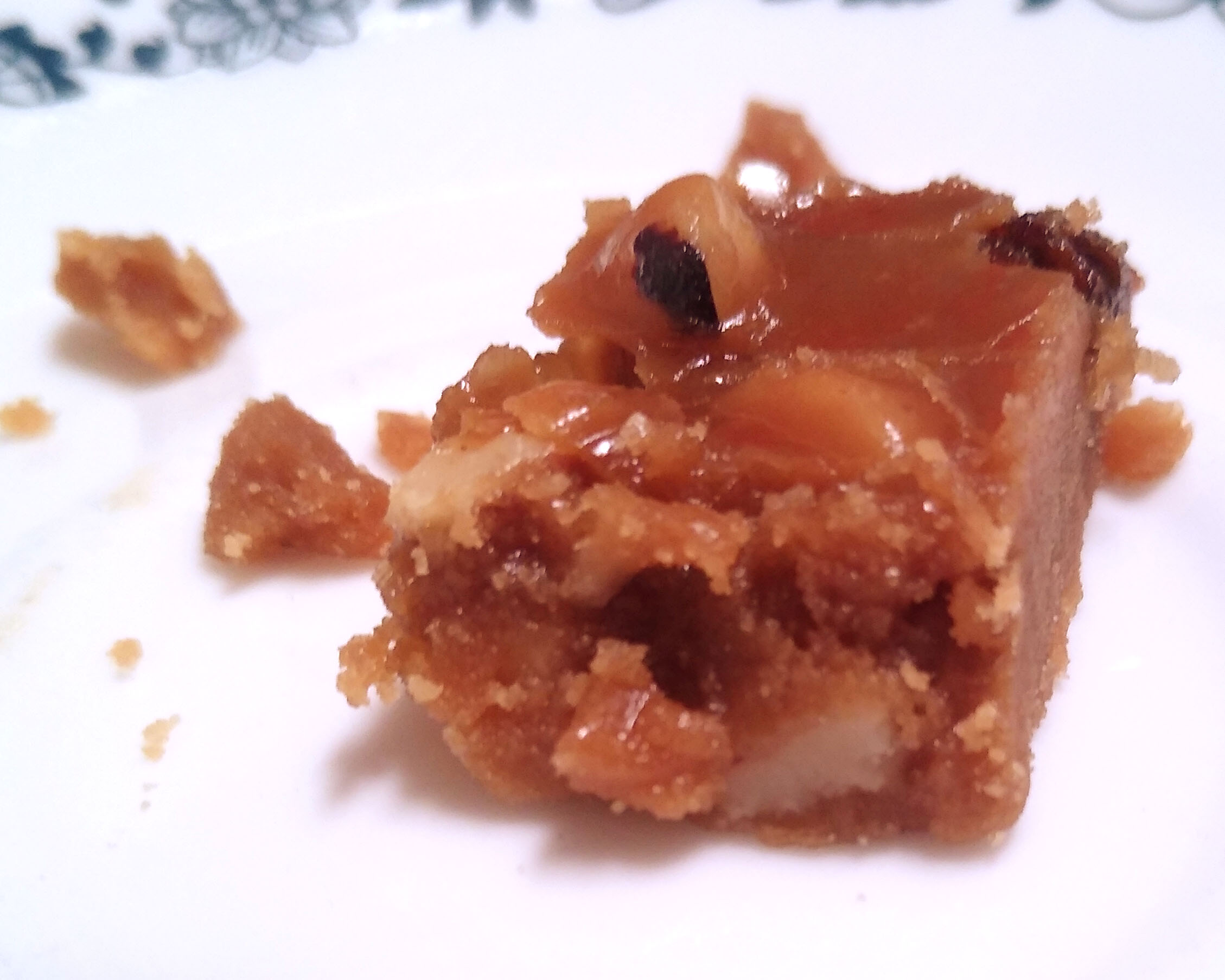 This is my idea of a good time.

I try not to fall for gimmicky recipe names, but "Persian Fudge" grabbed me by the title during that fateful weekend of free newspaper clippings. I may have to write Newspapers.com and blame them for allowing more desserts into my life. At any rate, we had a long day of household maintenance, and I decided to treat myself for semicompetently helping with some this-should-not-be-DIY projects.

Looking at the recipe, I don't get what's so Persian about this. At first I thought maybe there's a very similar Iranian recipe that uses dates instead of raisins, but pineapples are apparently not native to that part of the world either. For some reason I thought pineapples originally came from Asia, but apparently they are South American.

Let's begin with why I picked Persian fudge: a can of pineapples turned up when I was looking for something else. Unfortunately for others in the house, I have a recipe for every unexpected canned food that turns up in the pantry except the canned beets. 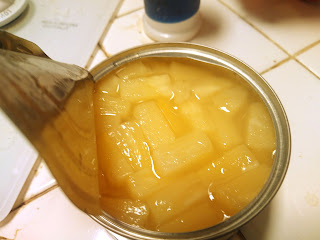 After we got the pineapple drained (but did not blot the pineapple on paper towels, which will come back and ruin our fudge later), we read ahead in the recipe and saw that all the fruits and nuts get dumped in all at once. So I put them all in one bowl because sometimes I am just that good at planning ahead.

Moving on in ingredients, did people used to just keep jars of marshmallow cream on hand? I've only seen it used for two purposes: Rice Krispy treats and fantasy fudge. Both of those use the entire jar. What am I supposed to do with the rest of the white stuff after taking out two teaspoons for this recipe? Marshmallow cream seems to deflate into sticky goo within ten minutes of opening it, so I can't exactly save the rest for later. In the name of economizing, I instead used a spoonful of corn syrup from a bottle that has been hanging around since someone made a long-forgotten pecan pie. Marshmallow cream is mostly whipped corn syrup anyway. 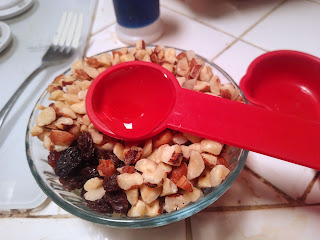 Now that we have all the other things ready, we could get to the fudge itself! I'm not sure what that tiny spoonful of butter is supposed to do here, but I'm not the one who got my recipe printed in the newspaper. Besides, they printed Miss Frances E Kent's name and address right with the recipe so I can send her an angry postcard (since it's 1935, there's a Depression on, and postcard stamps are cheaper) if this recipe goes wrong. Sometimes I surprise myself by being able to make candy without a thermometer. Doing candy with just the cold-water test always seemed like one of those magic skills that only a select few can ever master. But unfortunately, candy thermometers have a short lifespan around me. Every time I get one, use the thing once and then put it in the drawer in its little protective storage tube. The next time I want to make candy, I take out the thermometer and find only broken glass. At least once, I have accidentally thwacked the thermometer with a spoon while stirring the candy, sending glass shards into the molten syrup. So I've given up on candy thermometers.

I could have stopped the recipe here and probably eaten the entire batch. This is some really delicious brown sugar fudge. Either unfortunately or fortunately, one of the benefits of doing the cold-water test on candy instead of using a thermometer is that you get to taste-test your creation long before it cools. You might even pour a long, hot drip into the cold water just so you can eat it now. 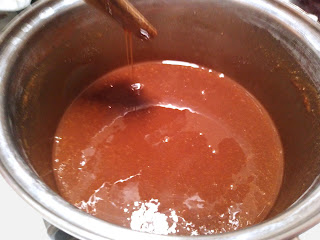 But we didn't come here to make brown sugar fudge, we want Persian fudge! This big pile of stuff is what makes this Persian, apparently. 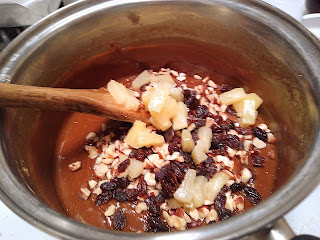 My expectations for the Persian fudge dropped significantly when I poured it out into the pan. It looks like one of those novelty rubber vomits that you humorously place where someone will hopefully mistake them for genuine puke. Perhaps it would look better if I used a smaller pan, which would help all the fruit and nuts to sink into it instead of protruding like yesterday's corn. If you're going to serve Persian fudge, you will need to cut it into cute little cubes and artfully arrange them or else you will put everyone's ability to keep a straight face on trial. 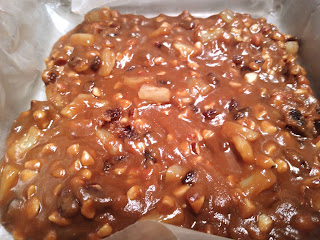 Incidentally, I decided to try pouring the fudge onto paper instead of greasing the pan. Cooling spray always makes bottom of the candy a bit oily, and I was hoping the paper would prevent that. The fudge welded itself to the paper. But at least we could easily lift the entire thing out of the pan after it cooled.

After come careful peeling and judicious use of a spatula, we could taste this Persian delight. It looks a bit less previously-eaten after you cut it. If you cut it into tiny squares and put them in those paper liners meant for mini-muffins, they might look downright cute. 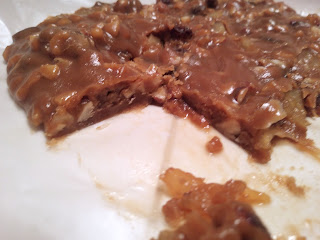 I must note my biggest mistake because this is when it made itself obvious: I drained the pineapple but I didn't put it on paper towels to really dry out. At the time, I was afraid that overdrying the pineapple would turn it into flavorless yellow pieces of fiber. To the recipe's ruination, the pineapple juice leached into the surrounding candy, causing the Persian fudge to break itself apart from the inside. 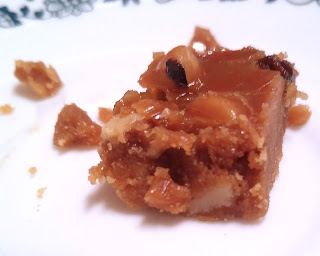 With that said, the Persian fudge has a lot of promise if you remember to blot your pineapple. It tastes like a granola bar with slightly more sugar on it. Or, it tastes like trail mix set in brown sugar fudge. Whichever one it reminds you of, this recipe works really well. Miss Frances E. Kent definitely earned the $2 grocery basket for this recipe.

But this recipe is really rich. I could feel the ever-disappearing remains of my pre-pandemic figure getting ever farther away whenever I ate any. Consequently, I gave most of it away and hoped no lucky recipients came back asking me to let out their clothes.

I would cut the original published quantities in half unless you're making this for a very large party and no one else is bringing homemade candy. And regardless of how much fudge you make, cut it into very small pieces.