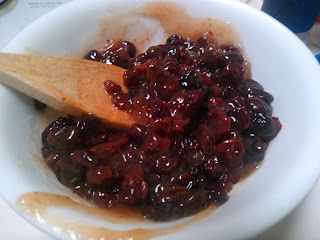 When I showed this recipe to friends, most of them asked "What do they mean, seedless raisins?"

It seems that most people I know had a terrible experience when the chocolate chips in some cookies turned out to be terrible, awful, slimy, sticky raisins. As for myself, I don't exactly love raisins, but I do think they add nice little spots of concentrated tartness to oatmeal cookies and a few other things. And so, after subjecting myself to the awful, bitter, cookie-ruining walnuts, I am indulging in another polarizing ingredient. 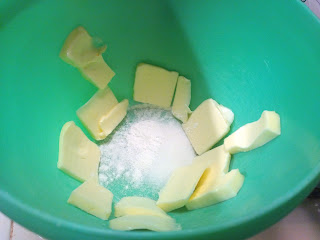 During the free Newspapers.com trial that sent me on a recipe-screenshotting binge that lasted until the end of the weekend at midnight Mountain Standard Time, I was surprised to find that most of the newspaper recipes came from syndicated columns. I thought at least a few newspapers would have their own cookery columnists on staff, but apparently that was rare. This disappointed me. I didn't want to see what was approved for national distribution, I wanted to see what was actually cooking in the kitchen of people who were not professional home economists with publishing contracts. This brings us to the source of today's recipe:

During the 1930s, the Philadelphia Inquirer had a weekly recipe exchange. That's two full newspaper pages of recipes every week from the houses of ordinary people instead of some far-off test kitchen full of professionals. If your recipe was one of those chosen for printing, not only would the entire greater Philadelphia area see it with your name, but you would win a $2 basket of groceries. That's, like, $45 in 2022. Doesn't $45 in groceries sound like a minor yet marvelous windfall in a time of economic uncertainty? This week, Mrs. David K Harris of Wilkes-Barre won a $2 grocery basket with these squares of citrus and raisins. 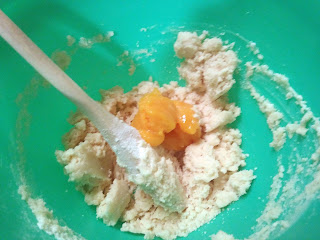 I should note that we're using orange juice concentrate because we have it on hand. We keep a can of it in the freezer and scoop out generous spoonfuls of it to add to marinades. I'm sure Mrs. Harris (and anyone else doing the daily cooking with a Depression on) would understand that we want to reduce the cost of this recipe by the cost of a fruit. In further economization, we bought neither fresh lemons nor the cheapest bottle of lemon juice to use in the raisin filling. We still had frozen lemon juice from the lemon cream cookies that used only the lemon rind. "Helping the Homemaker" lived up to its name and spared us the price of a lemon. 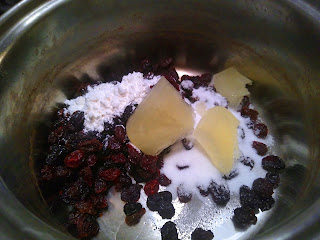 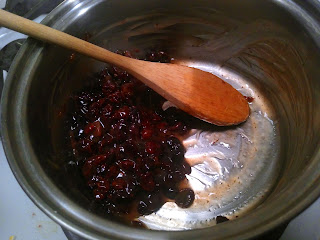 I thought this looks like a really nice wintertime recipe. The ingredients seem right for that time of year. A lot of older stories get lovingly reminiscent about getting an orange for Christmas, so apparently citrus could keep fresh into the bleak midwinter. And of course, raisins have the shelf life of dried fruit.

But upon checking the date on this recipe, it came out in mid-June. I'd have thought the economical home cook of 1935 would be more inclined to take advantage of the fresh summer produce and let the dried fruits wait until snow season. But then again, it's the middle of summer and I'm making this very recipe.

As we arrived at the point of final assembly, it became obvious that I had erred in pan size selection. I had halved the recipe and therefore used a little pan. However, this recipe already uses a small pan, and cutting it in half meant that even the tiniest pan in the house wasn't little enough. I could barely coax the raisins to spread from edge to edge. The orange pastry had to be rolled so thin it threatened to rip like wet paper. 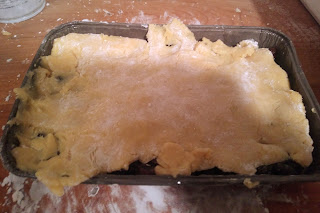 At any rate, we were ready to bake these at--- hold on a minute. There is no way 475° can be right. You'd burn a pizza baking it at 475° for twenty minutes, even if it was still ice-cold when you put it in the oven. For our Celsius friends, 475° is about 250°, which you may recognize as way too hot for baking cookies. I decided this must be a typesetting error and set the oven to 375° (that's about 190° for everyone outside the US) instead.

I felt a little bad for Mrs. David K Harris. Someone (I'm guessing) grabbed a 4 instead of a 3 when typesetting the oven temperature, which added 100 degrees to it. Then the misprinted recipe was distributed all the way from Harrisburg to Trenton with her name and address below it. 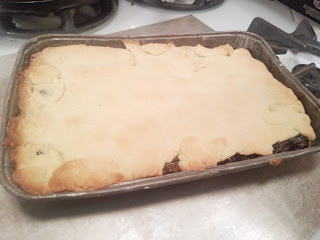 Every time I make orange-flavored recipes, I'm always surprised that they're never orange-colored without a bit of artificial assistance. Maybe people in the days before this recipe was vintage didn't expect every orange-flavored baked good to identify itself by color, but in this era it is a bit jarring for the orange pastry to have the same color as the vanilla one. 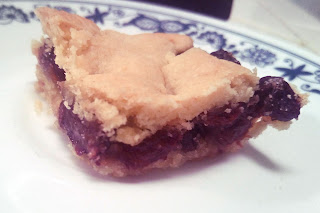 This recipe tastes exactly like what goes into it. I kind of expected the orange and the raisins to meld and harmonize into something greater than themselves, but they did not. Nevertheless, orange and raisins go very well together. The orange-raisin squares kind of remind me of Fig Newtons with the shortbread encasing a dense brown filling. If you like raisins (or whatever dried fruit you might substitute), this is an easy, economical, and all-around nice way to cook them. Orange-raisin squares may not be the first thing to disappear from a cookie table, but they won't be the last neglected rejects either.