Sour Cream-Pecan Coffee Cake: or, Always follow the handwriting to find something delicious

This recipe is shorter than it looks.

This recipe begins with typewriting my own recipe cards. As aforementioned, one of the people in the house has taken to repairing typewriters. It's hard to repair typewriters if you have no typewriters to fix, so a lot of them have been brought into the house in varying states of dereliction. Because it's always well to support your friends' interests, I near-shamelessly offered to provide him a practice typewriter or two. That is how mine ended up on his table in pieces.

Believe it or not, I actually did school assignments on this thing a few times in middle school due to our unreliable printer. If you think I'm humble-bragging that I could type without errors at such a precocious age, you should know that all my typewritten papers had more crossed-out words than not, and half the time my words ran right off the page because I didn't know margins were an option.

Unrelated to typewriters but relevant to today, this turned up while freeing up cabinet space: 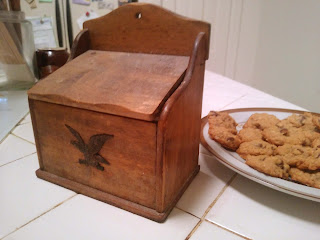 Having a box to put recipe cards in has caused to make typewritten recipe cards. I may have a speed of one minute per word, but it's oddly satisfying to make these things. I also am probably one of the first people make a recipe cards using the word "tedious" and "heretofore."

I've been tucking the cards into the recipe box, which is already full of someone else's recipes. Sometimes I flip through them for interesting ideas, but a lot of them reflect pre-pandemic grocery prices. Other recipe cards have been gently returned to their places because whoever owned this recipe box was as... adventurous as I like to be when cooking. In other words, no one but me liked some of the more eccentric recipes. But this week, we had a surplus of sour cream lying around the house and some bananas that were threatening to rot on the counter. Towards the back of the box, we found.... 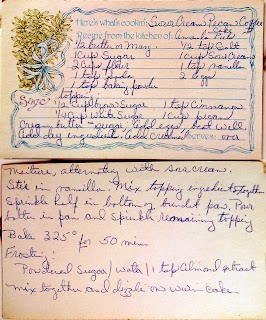 Aside from cutting the recipe in half, we only made one alteration. Pecans are, shall we say, a teeny bit costly of late. So we got walnuts instead.

In full disclosure, I hate baking walnut chunks into cake. They seem to go extra-bitter as everything bakes, and they take on this unpleasant not-crunchy-but-not-soft-either consistency. So, we got out the power tools. I know this is technically a coffee grinder, but we more often put assorted other things through it instead. Rarely do we put coffee in the coffee grinder unless it's for a recipe. 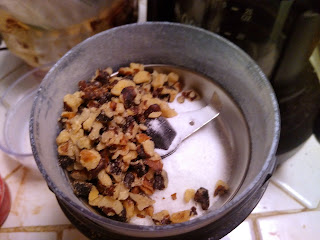 It turns out that nuts expand a lot when you grind them! This half-cup of nuts filled up one of the soup bowls after reducing it to sand. We still appreciate Eric C's suggestion to add sugar to the grinder to prevent everything from oiling up. Instead of walnut paste, we got this lovely crumbly cake topping. That's all walnut aside from that little cap of brown sugar and cinnamon on top. 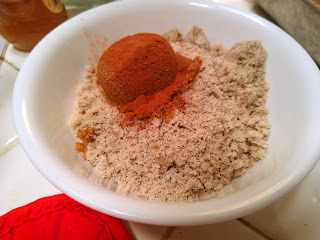 Before we get any further in the recipe, I will note that this recipe looked like it would really want to stick to the pan. So, I put paper in it to guarantee that no one would be chiseling dessert out of the pan. I then used enough cooking spray to practically deep-fry the cake. 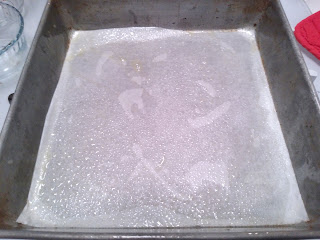 After that quick detour, we move from electric grinders to even bigger motors! I've often said I prefer using a wooden spoon over a mixer because it's more satisfying, but it's really convenient to let your ingredients mix together unattended while you get the next item out of the pantry. I seem to do it by hand less and less these days. It's just more fun to see the ingredients whizz around the bowl. 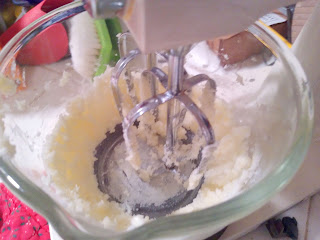 Using a mixer also means it doesn't matter as much whether I properly softened the butter. Any refrigerator-hard clods get thoroughly bashed out of existence with no effort from me.

For a recipe that runs to both sides of the card, you get this mixed together pretty dingdang quick. I was adding in the sour cream before I knew it. 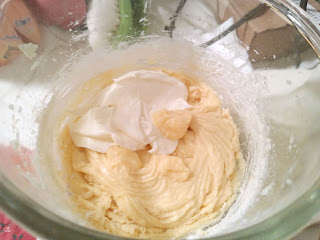 The finished cake batter was the thickest I have made aside from a 1234 cake. As you can see, it neither drips nor droops off the cake beaters. It also tasted so delicious that it revived my dream of dumping cake batter into an ice cream freezer and eating the resulting frozen delight. 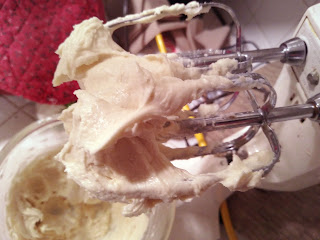 There was no way I could spread this in the pan without shoving all the walnut sand all the way to the edges. Instead, I dropped little spoon plops in the pan so I could gently smear them flat without having one big pile of cake batter skidding over the walnuts. 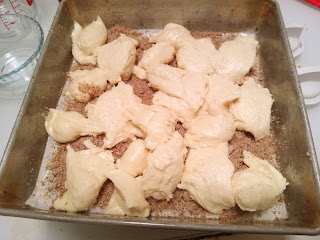 The batter didn't look like it would turn into a cake. It looked more like the first step of one of those multilayered cookie-bar recipes where you partially bake the bottom layer and then put custard on top. We sprinkled the other half of the walnut sand and hoped that this cake contained a lot more baking powder than I remembered adding. 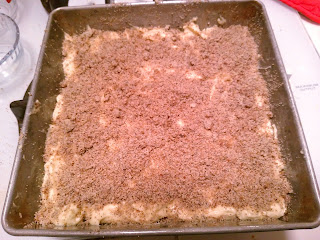 The cake looked reassuringly less wafer-thin after baking. The icing wasn't very visible, but it does serve the useful purpose of gluing down a lot of the walnut sand that would otherwise fall off as soon as you lifted out a slice of cake. 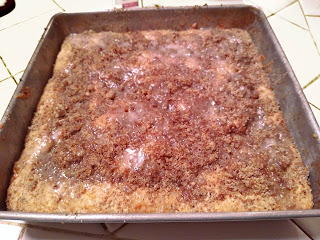 If we take a closer look, we can see that the pulverized walnuts made a really nice streuselesque topping. I imagine that we're supposed to have embedded sprinkles of powdered sugar and an artful scattering of pecans instead of a uniform crumbly topping, but this worked really well. Besides, there are no gravelly walnut pieces ruining the cake. 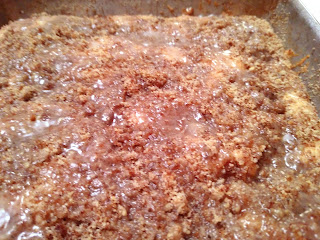 If we turn a slice on its side, we can see that the bottom layer of walnuts turned into what almost looks like a graham cracker crust. 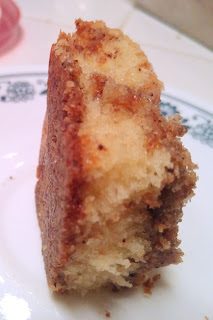 Given how thick the batter was, this cake turned out really light. I thought it would be really dense and heavy, but it's quite the opposite. The toasted nuts on the top and bottom add a lovely flavor, and the streaks of concentrated almond extract drizzled on top make it perfect.

But as you may know, I do not care how good cake toppings are if the cake itself is bad. And.... this cake is so good we made another one the next week. 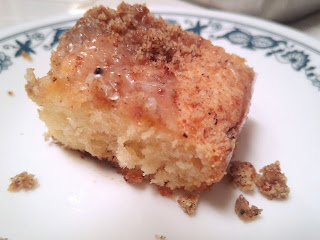