As American as Chop Suey

Today on A Book of Cookrye, we're digging into the world of passé "foreign" foods. Actually, we're making something that changed American history a lot more than you may realize. We are making the dish that changed Chinese food from something weird and foreign to something so popular America that there are more Chinese restaurants than McDonald's, Burger King, Kentucky Fried Chicken, and Wendy's combined.


Chop suey today is really out-of-date food, but it used to be a really big deal. Chop suey restaurants even made their way into fine art (this is from the same artist who did that diner painting).
In this amusing talk, a writer who did a fascinating book about the history of Chinese food in America called chop suey --and I really love this quote-- "the biggest culinary joke one culture has played on another, because chop suey, if you translate into Chinese, means tsap sui, which, if you translate back, means 'odds and ends.' So, these people are going around China asking for chop suey, which is sort of like a Japanese guy coming here and saying, 'I understand you have a very popular dish in your country called "leftovers," and it is particularly popular after that holiday you call Thanksgiving.'"
I've seen a lot of writing about how chop suey is not an authentic Chinese dish, and saying that since we know it's barely if at all Chinese, we should move on to real Chinese food. And as you know, the food you get from a Chinese takeout in our more gastronomically enlightened times is so much like the home country that you can order some sweet and sour chicken and have your Chinese immigrant friends sighing and wiping away a tear for the home country.
Chop suey went out of style because people realized it's not Chinese. I do love the urban legend from around that time about a visiting Chinese dignitary (or prince- it depends on who's telling it). He and his retinue were in New York some time around 1905. The Americans assigned to do whatever kissing-up and stuff you do with visiting foreign dignitaries announced they were pleased and proud to announce a banquet in their honor in one of New York's best hotels. Furthermore, it would be an honor to serve that national dish of their country, chop suey. The Chinese dignitary, mildly confused, asked "What is chop suey?"
While I could find chop suey sauce and canned chop suey vegetables online, no one sold them in the stores by me. And who wants to pay shipping to order canned vegetables online? Also, because beef is expensive, I got trimmings instead. As an added bonus, I hardly had to do any cutting. Some friends of mine will point out that I'm really lousy at chopping. If ever I'm cooking for someone who wants things finely chopped, I usually hand over the knife because I can't be bothered.
It occurred to me that for all people say chop suey has gone out of style, it looks a lot like the beef stir-fry you can get at 10:30 at night from that drive-thru takeout up the street. I think they just renamed it once "chop suey" became synonymous with "totally not foreign so don't fall for it." 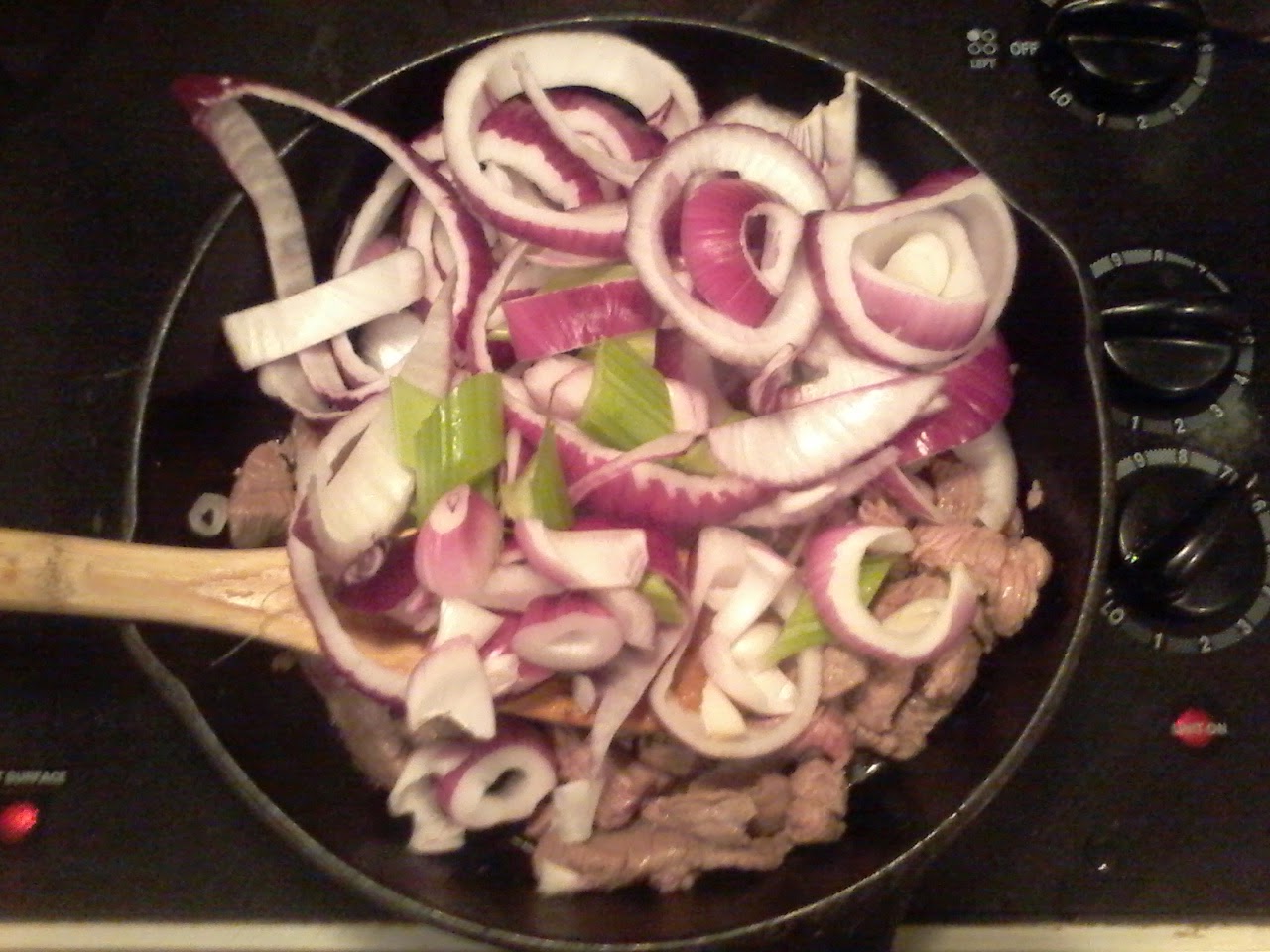 And since this really is just making a stir-fry, it's far more interesting to point out that China has built the highest bridge in the world. The canyon under it is so deep that the usual methods of stringing the two main cables across wouldn't work. They strapped them to rockets and shot them across the river.

While the Chinese are building incredibly high bridges, I'm in my kitchen making really brown "Chinese" food.
And I know it's not at all authentic, but it tastes exactly like what you're thinking of when you crave Chinese takeout. This is not what you eat when you're adventurously trying food from around the world for fun and cultural insight. This is what you order when you've got all your friends over or when it's 10 at night and you just got home.
The sauce was a bit runny, though. The modern-day way of thickening it with cornstarch works a lot better than flour.
Posted by S. S. at 8:54 AM