Making cheesecake the most modern way

Today, we at A Book of Cookrye shall make something super special- cheesecake! And not just any recipe: this one is special. You see, in high school, my Spanish teacher would give us the last day of every reporting period off from lessons, presumably to get all the report-card paperwork in order. This led to us all bringing food and making a party three times per semester. As I already had a modest business and reputation selling baked goods to people at the end of every reporting period so they could have a bribe in their hands when trying to beg their grades up, it didn't take long before the class started putting in requests for what I'd bring. Before the year was halfway over, they'd actually vote on it. (Looking back, I'm astonished I ever fell into engineering school.) At any rate, at the end of one reporting period the the class voted on cheesecake. And this is how I came to possess a cheesecake recipe from my high school Spanish teacher.

What is the impetus for this? Well, Our Father of Cookrye really likes cherry cheesecake. For years, he would get a cheesecake made from a Jell-O kit once every 365 days before he mentioned that he might not be quite so fond of cheesecake from the Jell-O box anymore. You might think this would have caused a shift to making a cheesecake properly (after all, how hard is it to make one once a year?), but this unfortunately put a stop to the flow of annual cheesecakes instead. At any rate, today we shall simply use cherries instead of blueberries.
But we at A Book of Cookrye will do this particular cheesecake a very special way.... 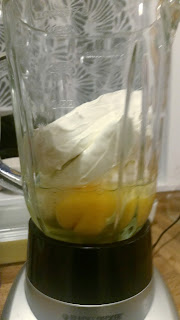 Actually, cheesecake seems better suited to blenderizing than regular cake does since it has no flour. This summer, I'm taking a baking class in the name of a culinary arts degree. Rants about having to get up at sunrise when I can never get to sleep before first light aside, we all have heard a lot about gluten so far. Depending on the recipe, we encourage the gluten, relax the gluten, reduce the gluten, minimize the gluten, rest the gluten, work the gluten... I've spent more time per day learning about and working with gluten than I did on my past relationship. Point being, I can now stand on the authority of a partially-finished baking class and say that with no flour at all in the cheesecake, there is literally zero possibility of overworking any gluten and making the cheesecake come out overly tough. You may as well try to knead a smoothie. However, cheesecake is no task for a cheap blender.

Also, the motor turned itself off multiple times. I did not know blenders could do that when they felt overworked. For those trying this at home, you need to set your blender to its Ice Crusher speed. 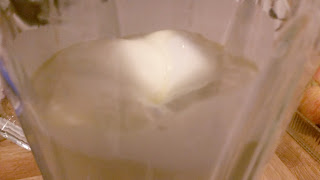 Were this an ordinary blender, I would have transferred the glop into a bowl after the first few times the motor gave up, and pretended the blender never got involved. But this, my friends, is a wedding blender. This blender did not come from a store, but arrived new-in-box from someone's wedding. And if the small appliances from a wedding fail, it is a sure sign that the marrying couple had cheap friends.

Incidentally, I have literally never filled a blender this high. As I gazed upon this pitcher of pure fat and sugar, I wanted to clap my hand to my heart, grab the nearest convenient made-in-China flag, and sing GOD BLESS AMERICA. All we are missing is an ungodly amount of high-fructose corn syrup.

Adding the cherries (which today we are stirring in rather than putting on top) put us right up to the top of the pitcher. 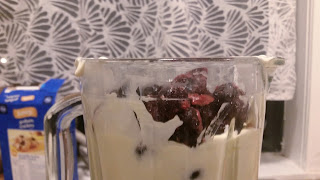 By the way, those using frozen fruit might do what occurred to me about ten minutes after I got this in the oven: forget about mixing them in the bowl (or pitcher) and just scatter them on top once you've got everything in the pan. No matter how much you try to barely stir just until mixed, the frozen juice crystals will melt and dye the batter. Which, in this case didn't matter much since the cherries dyed it a pretty pink rather than some weird gray-greenish color like one gets with things like frozen blueberries. (Maybe I should have just gone with it and stirred until it was a uniform pink.) At any rate, if you don't want your frozen fruit dyeing the whole creation you're putting it in, consider scattering it on top right before baking instead of doing any mixing at all. 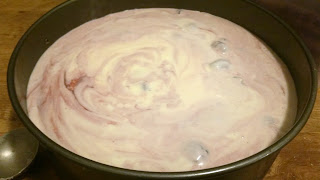 Also, if the top threatens to burn before the middle is cooked, be sure the foil you put on it doesn't touch the surface at all. Elsewise, this will happen. 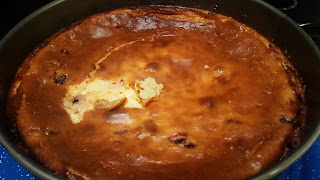 I intended to put the topping in a little bowl so that everyone could decide for themselves how much of it they wanted, but for obvious reasons did otherwise.

And this is how it came out! 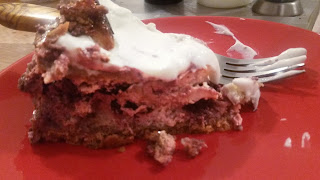 As you can see, the blender did a wonderful job of making a cheesecake! However, I suggest you only do this if either you have a really strong blender, or if you don't like your blender and have been waiting for it to burn out so you can replace it. Also, this is what the cheesecake looks like in the parts where the cherry juice didn't get quite so mixed in: 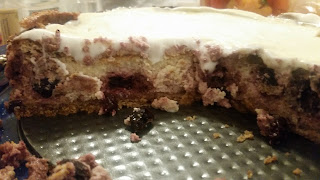 Ya gotta admit, a cream-colored cheesecake with dark red cherries throughout would have been a lot nicer-looking than a pinkish one.
Color aside, it's cheesecake. In a blender. We truly live in a wonderful age.
Posted by S. S. at 3:07 AM