Today on A Book of Cookrye, we present something I can't pronounce!

If you're like me, you've never heard of a dish called "chicken Charleroi" before. I say that because searching for the term (with and without quotes) turned up various chicken restaurants in cities called Charleroi. One Charleroi is in Belgium, and the other is in Pennsylvania. You say the Belgian city's name like this, but the Pennsylvania one like this. Also, it seems that Charleroi, Pennsylvania blasts a 10:00 curfew horn every night. Or so claims this guy.

For the sake of maximum period-correctness (and also because I didn't feel like having two books on the counter), we're using a recipe from the same book for white sauce (which hopefully is what Mrs. Lew Allen meant by "thin cream sauce").

It did occur to me later on that I could have spared myself a lot of bother by going to the nearest fried chicken shack and ordering a pint of white gravy. White sauce (white gravy, béchamel sauce, cream sauce, whatever you want to call it) has been one of the hardest things for me to get right in all my 20 weeks of cooking school because I never liked it. It tastes like paste to me. Whenever I try to season it, it still tastes like paste. Then I ask someone else who likes white gravy to try it, and that person will say I got it wrong and bring over two or three spice shakers. After they fix it and assure me that it should taste like it now does, I will try some and it still tastes like paste. I can't tell the difference after someone fixes it.
I'm not whining that I have to make things I don't like in a cooking class, but it is harder than I thought to make something if you don't like it. And I have the sort of rotten luck where I make the recipe exactly according to directions under the assumption that the recipe writer knew how said thing should be made. Then, when I ask someone to try the white gravy/boiled greens/whatever it is I don't like, that person will say "This tastes... wrong. " Whether you're doing math, crafts, science, grammar, or cooking, it always stings to find yourself facing disapproval and pathetically whining "But I did exactly what the instructions said to!"

But we can now put the white gravy aside. This recipe looks an awful lot like a budget version of the chicken pie as made in England (which was published 26 years earlier) if one were to forget about putting it in a pie crust. Also of note: it's called "chicken Charleroi" and included with the poultry recipes, but contains more ham than chicken. 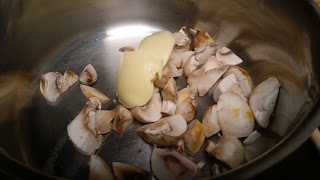 We very soon had a pot of grease with some mushrooms that fell in by accident. 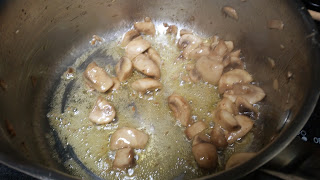 All right, now we get to the part where you dump stuff in. This recipe went a lot faster than I expected. But then again, all you really do is make a pot of gravy, cook a pan of mushrooms, and then just dump a lot of cut-up cold meat into the pot of stuff.
Looking at the below picture, do you think the gravy would have fried at the edges had I not stirred the pot? 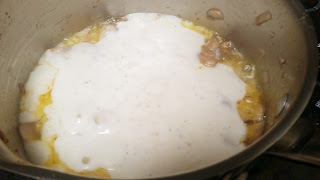 At this point, the recipe calls for leftover chicken and that mythical food called "leftover ham". I don't know about you, but in my family gatherings, there is no such thing. People start nonchalantly yet deliberately orbiting the ham well before everyone's been served, each waiting for the earliest possible chance to snatch the remains off the table and rush it into the car. 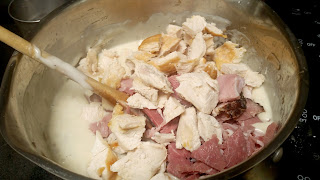 If Mrs. Lew Allen made this recipe enough to justify writing it down and sending it to the cookbook Committee (with a capital C, always), one may safely assume that she often had leftover chicken and ham to douse in gravy. But one must wonder, why not simply reheat the leftovers? Given the many, many recipes that use up leftovers in pre-1980s cookbooks, no one ever think of heating last night's dinner back up unaltered before the invention of the microwave?
Whatever. Let's sling this on a plate and call it done.

You know, it looks surprisingly like a now-dated version of what once was classy. Like, had I put some actual effort into arranging the plate, I could see this dish in the center of a now-faded photo spread of an elegant dinner in an extremely old cookbook.
That said, you shouldn't even have to ask if this was good. It's a big plate of mushrooms, ham, and chicken. Even the gravy ended up being really good after taking on the flavor of everything in it. Heck, you probably could serve canned asparagus with this- that gravy was miraculous enough to completely obliterate any nasty taste after dipping the asparagus in it. I personally would cut the gravy amount in half. But, in the same way a pot of spaghetti makes it possible to get multiple dinner plates out of a tiny ration of ground beef, the gravy made a small allotment of meat more filling than it should have been. This recipe may have originated with someone trying to stretch last night's dinner.
This is now (so far) my favorite recipe to come out of the book.
Posted by S. S. at 7:15 AM