Chicken Pie As Made in England, or Christening my grandmother's skillet

My grandmother a while ago asked me to get her a cast iron skillet on eBay because she wants one old enough that they machined out the inside. Part of me thinks she asked me and not my grandfather-- you know, her husband who is in the same house and not five hours away-- because she knew I'd compulsively strip and reseason whatever I ended up buying, especially since it's for family. And sure enough, when I saw the skillet in the mail, it went into a trash bag filled with oven cleaner and into my friend's yard. I actually kind of liked not having my own yard to leave it in- it meant we got to visit every couple of days while I was scouring and respraying the pan.
Would you like to see the before and after?


We at A Book of Cookrye decided to christen and test this pan, and needed a suitable recipe. Something adventurous and a little weird to us, but not scary or sure to end in regret. One of those things we'd never have thought of, but we're glad we tried it out. We found what we sought in this book. 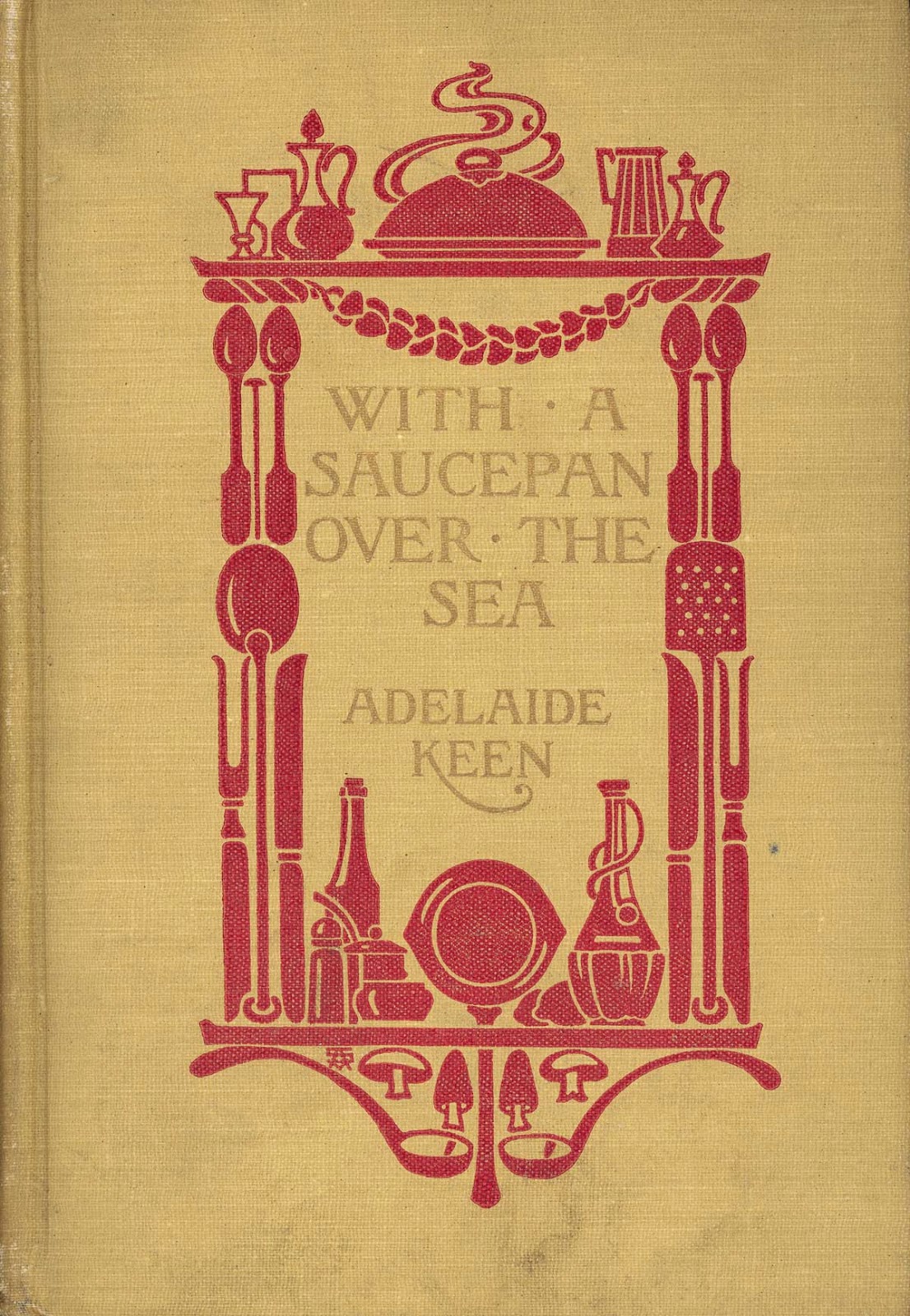 This comes to us from Feeding America, the digitized cookbook collection at MSU. Once again, we have extremely specific serving instructions.  We aren't going shooting any time soon, and the Thames is too far away. Having a picnic in the laundry room and watching the water flow from the leaky washer to the floor drain seemed a poor approximation. We briefly considered going to a sports game, but if British TV is a good indicator, even the old ladies would be more enthusiastic than we.


When getting recipes out of old international cookbooks, I wonder if anyone in the countries the recipes come from would recognize them today. Do people see recipes like this and think "Oh, my mother/grandmother used to make something like that"? Or maybe it looks near-exactly like a modern recipe for the same thing? In a similar vein, I'd love to see what's inside a book of American recipes written by an outsider and published in some other country for those who who want to see what those people in the US are up to in their kitchens. 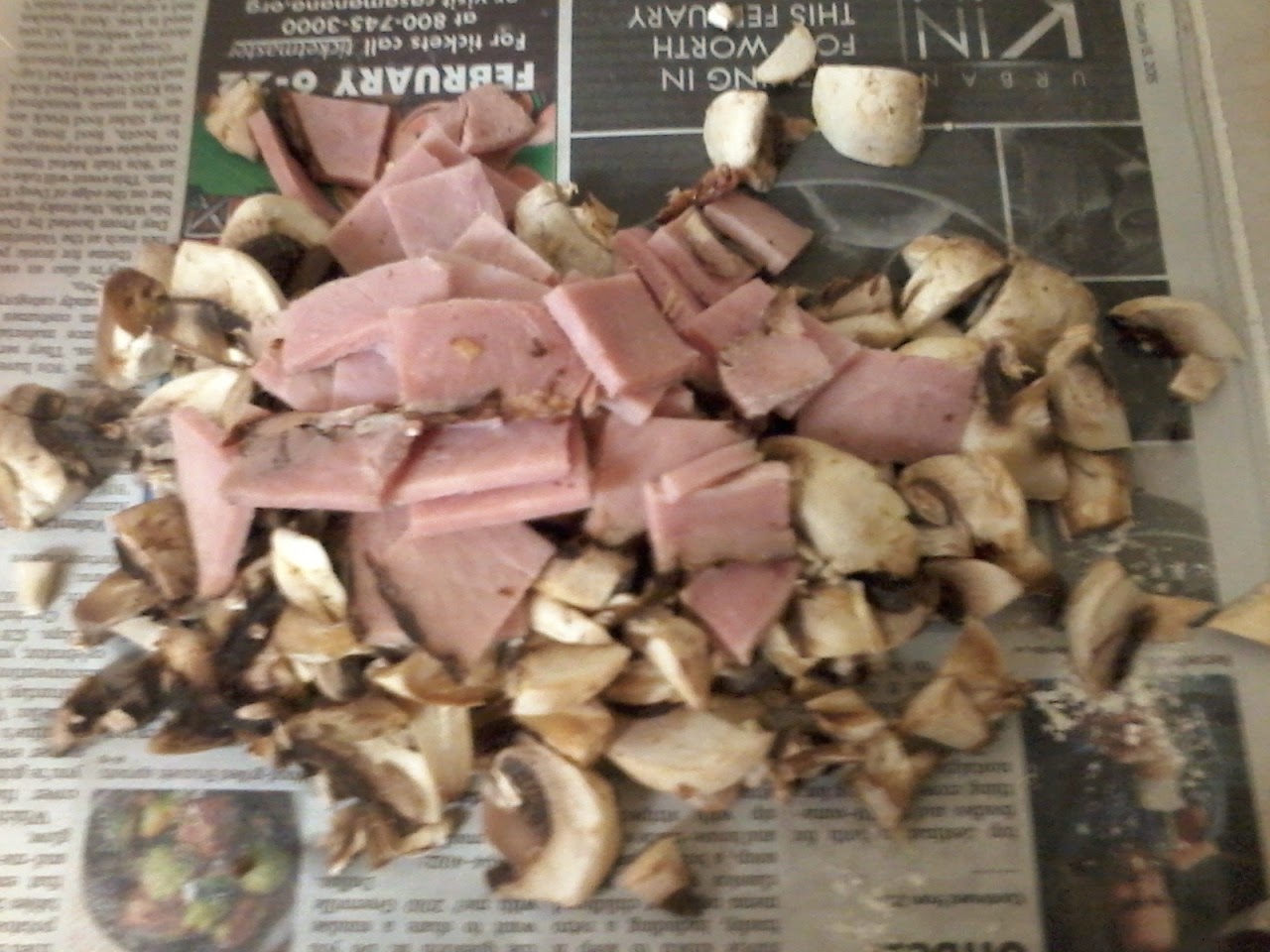 We at A Book of Cookrye would like to let you know that picking bones out of anchovies is maddeningly tedious. Also, the bones will stick to your fingers, leaving you thinking that you accidentally stuck them back onto the fish. Also, the meat falls apart in your hands, leaving you with lots of little anchovy pieces and unsure which ones you got the bones out of. Also, did you miss any which will make you choke and die? We would rather do as the Italians do and dissolve them.

Also, did you know gherkins are only cultivated for pickling? If you don't believe me, go out and try to find fresh gherkins anywhere besides a very specialized specialty store.
But now that we have two piles of chopped stuff plus most of a chicken, it is time to... er... sauce. 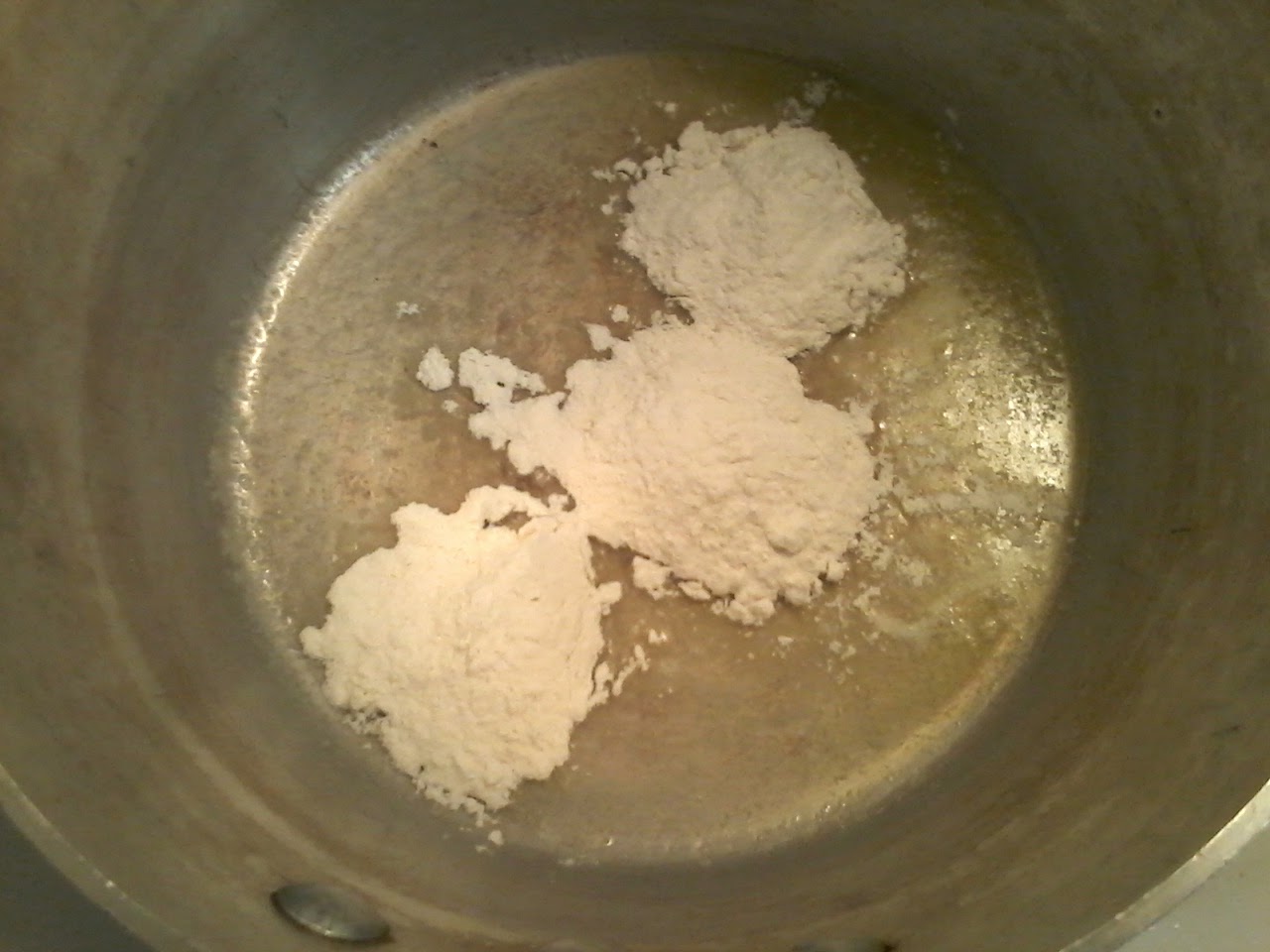 I guess people used to use white sauce to hold all their food together. It looks like glue at any rate. 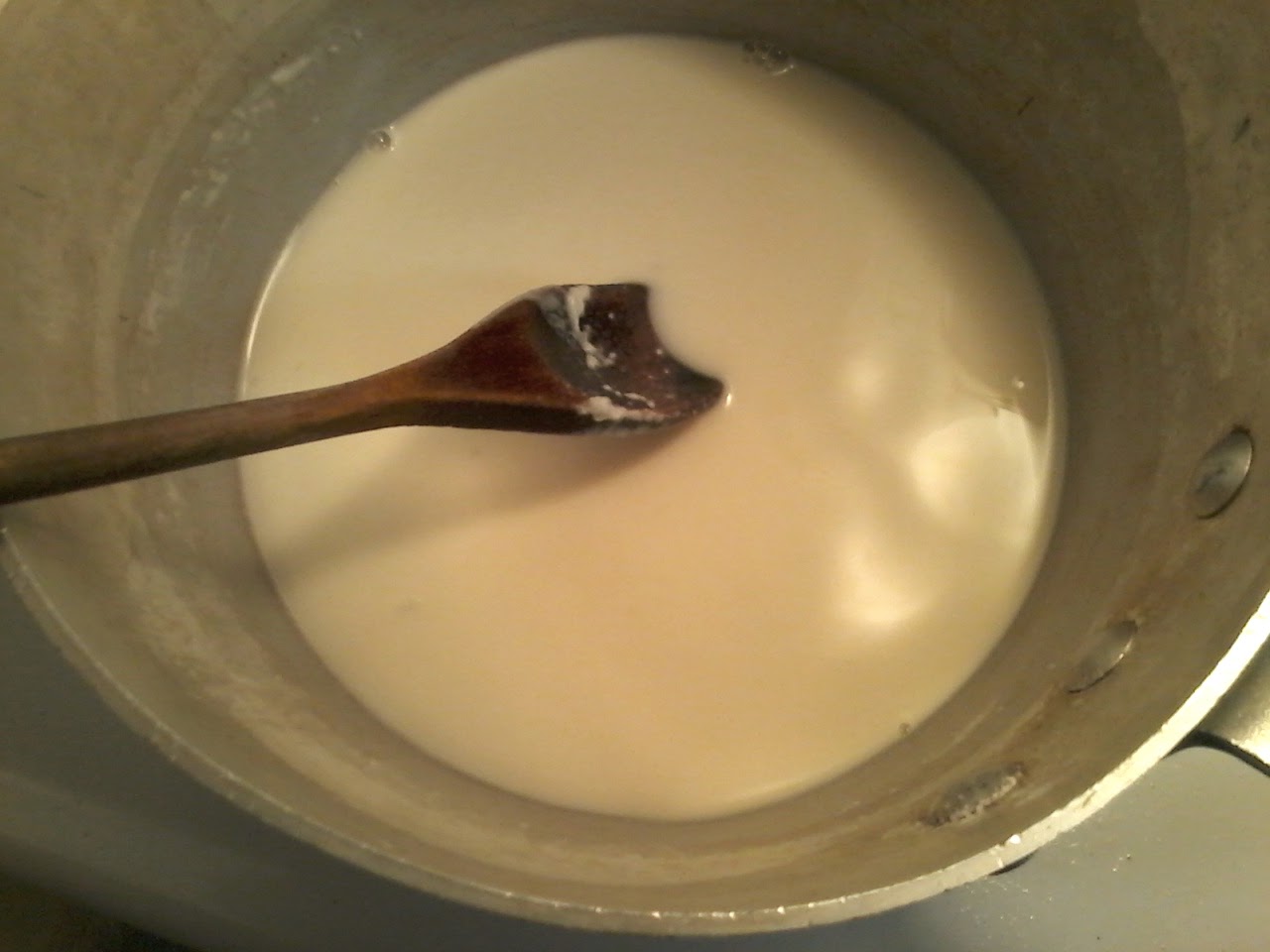 Upon some consideration (stirring a sauce lets your mind go elsewhere), we decided there's probably a fairly straight line between this and the Upside-Down Chicken Pie we made for the Pieathlon. They're both chicken and mushrooms with some other things added for flavor and held together with white sauce. This pie may be what that unfortunate canned creation was trying to be. 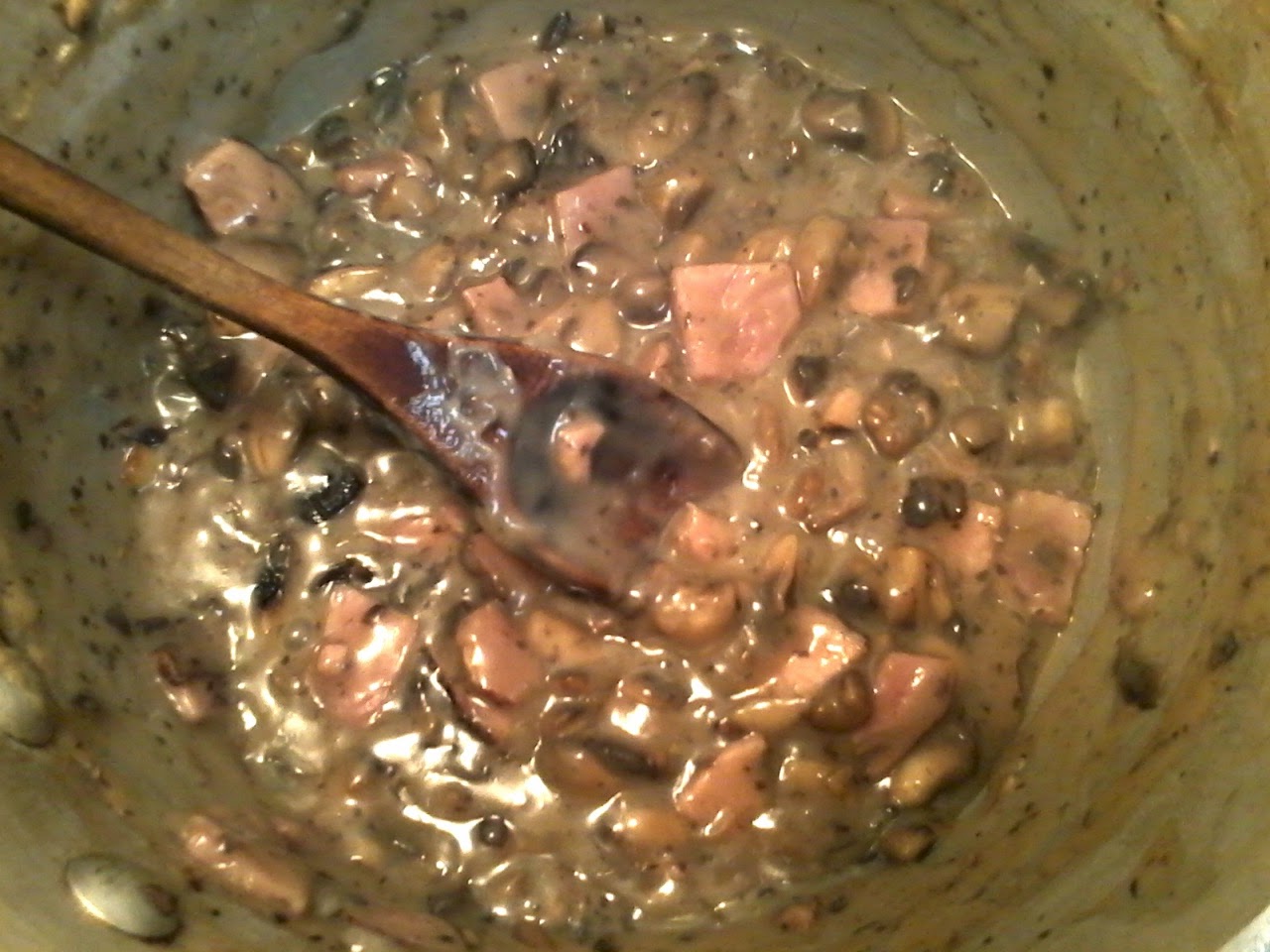 All right, this is when all of the work starts to pay off. The mushrooms and ham made the kitchen smell like the best breakfast ever. Forget suspending them in sauce, we want a pan of mushrooms and ham! 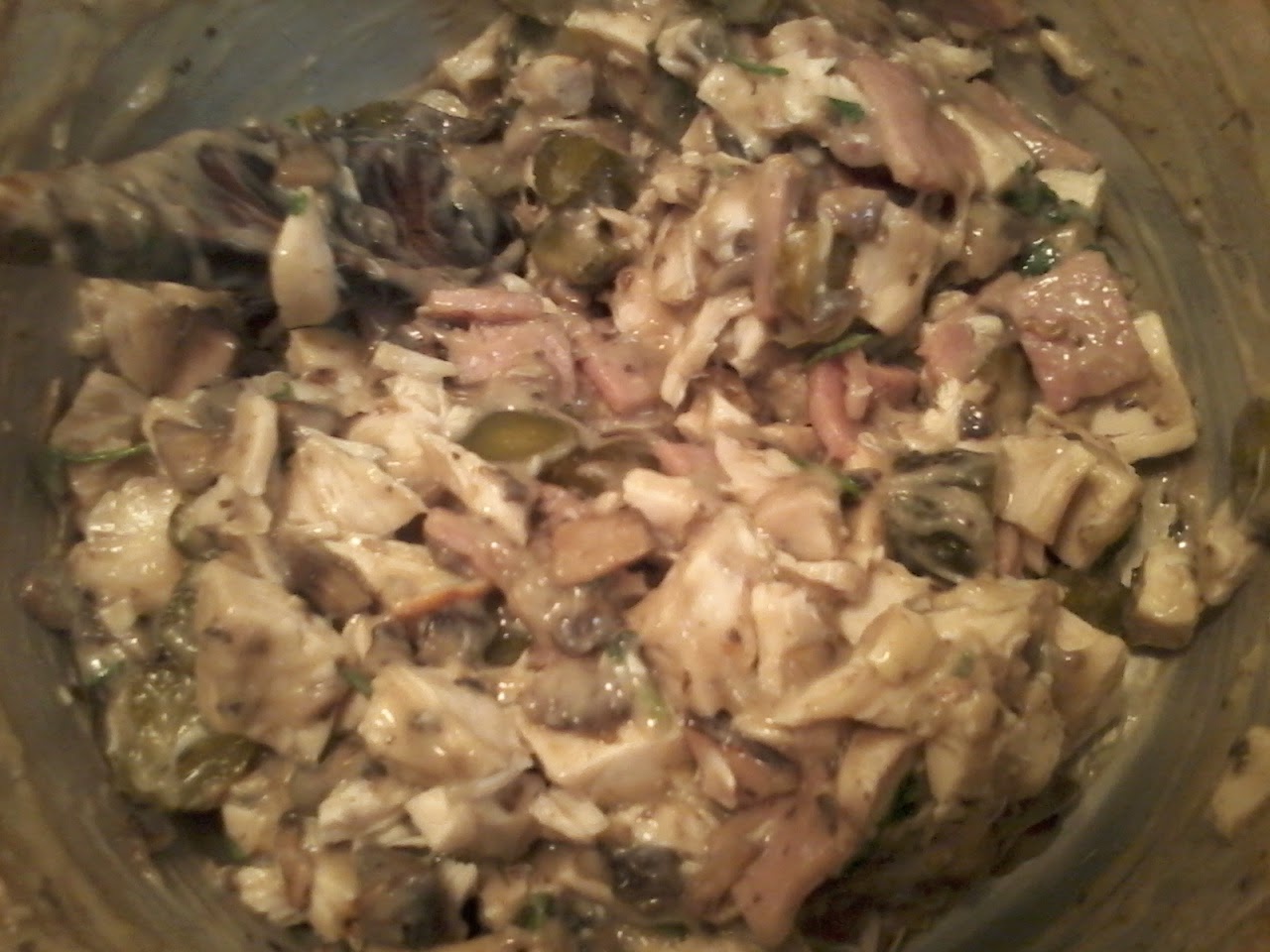 At this point, scary canned-chicken flashbacks aside, the pie tasted really good and was ready to bake. I was most curious about Mrs. George Thurn's pie crust recipe with that newfangled baking powder in it.

However, we first had to overcome my poor pie crust transferring ability and an overzealous refrigerator that turned the dough into a rock. 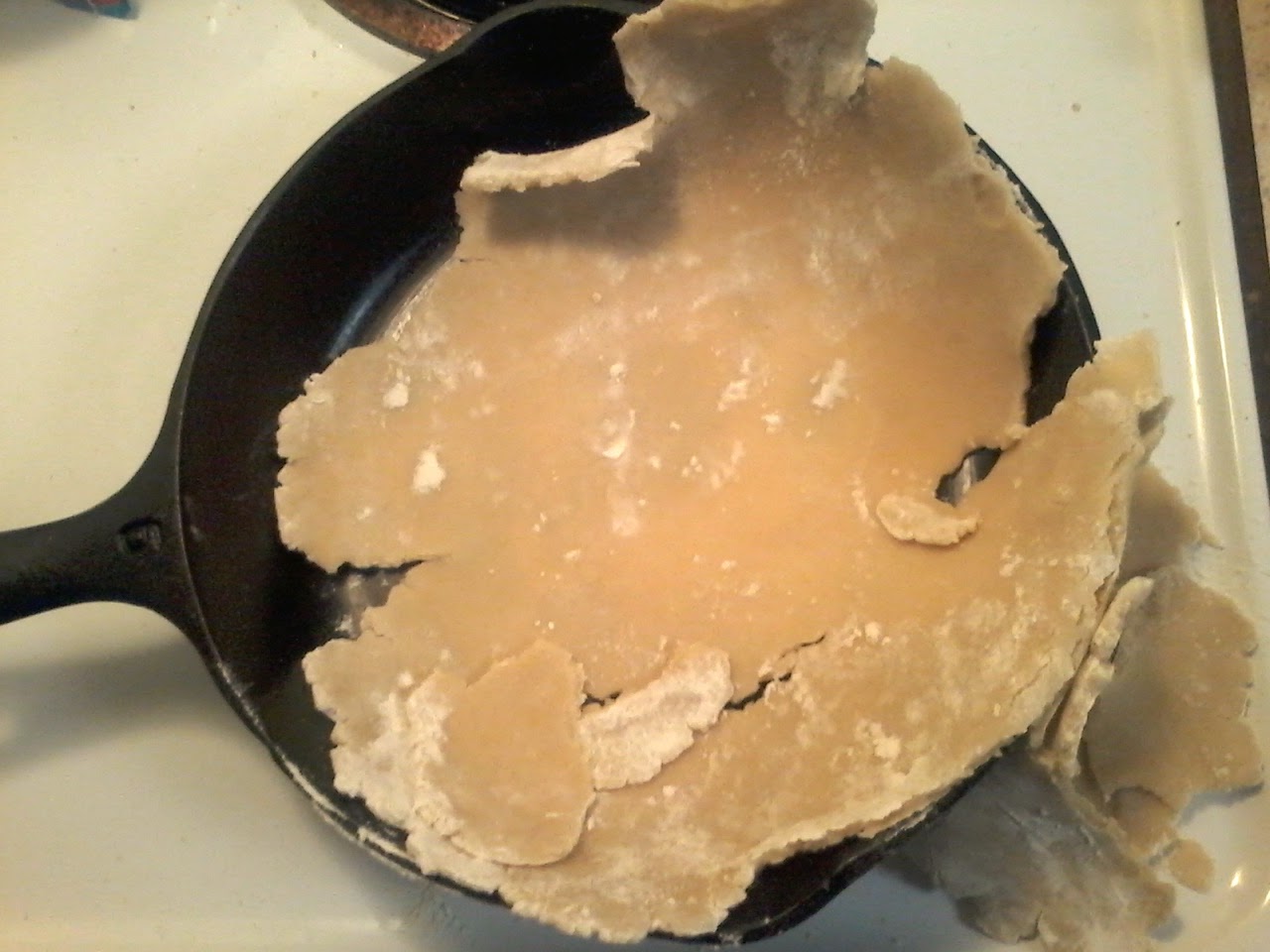 This isn't my first time doing a pie patch job. Heck, most of the crust was already in place this time.


Why does the filling looked like cafeteria slop in the pot but become pretty once it's in the pie? 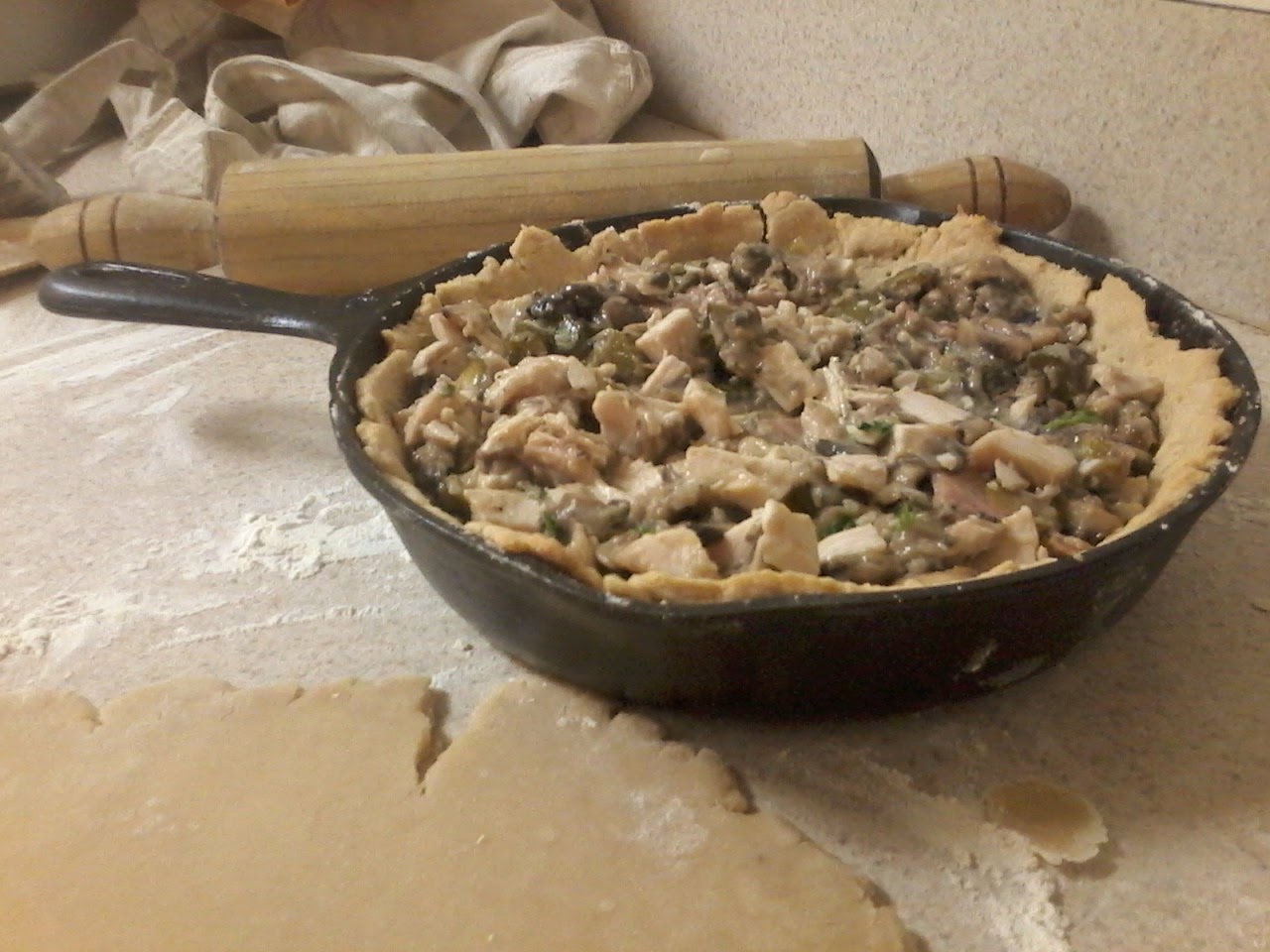 We at A Book of Cookrye can't decide if we like or despise long cooking times. On the one hand, we tend to wait until we're already hungry to start supper. On the other, at least we can get everything washed up so we don't have dirty dishes and counters waiting for us the whole time we're eating. 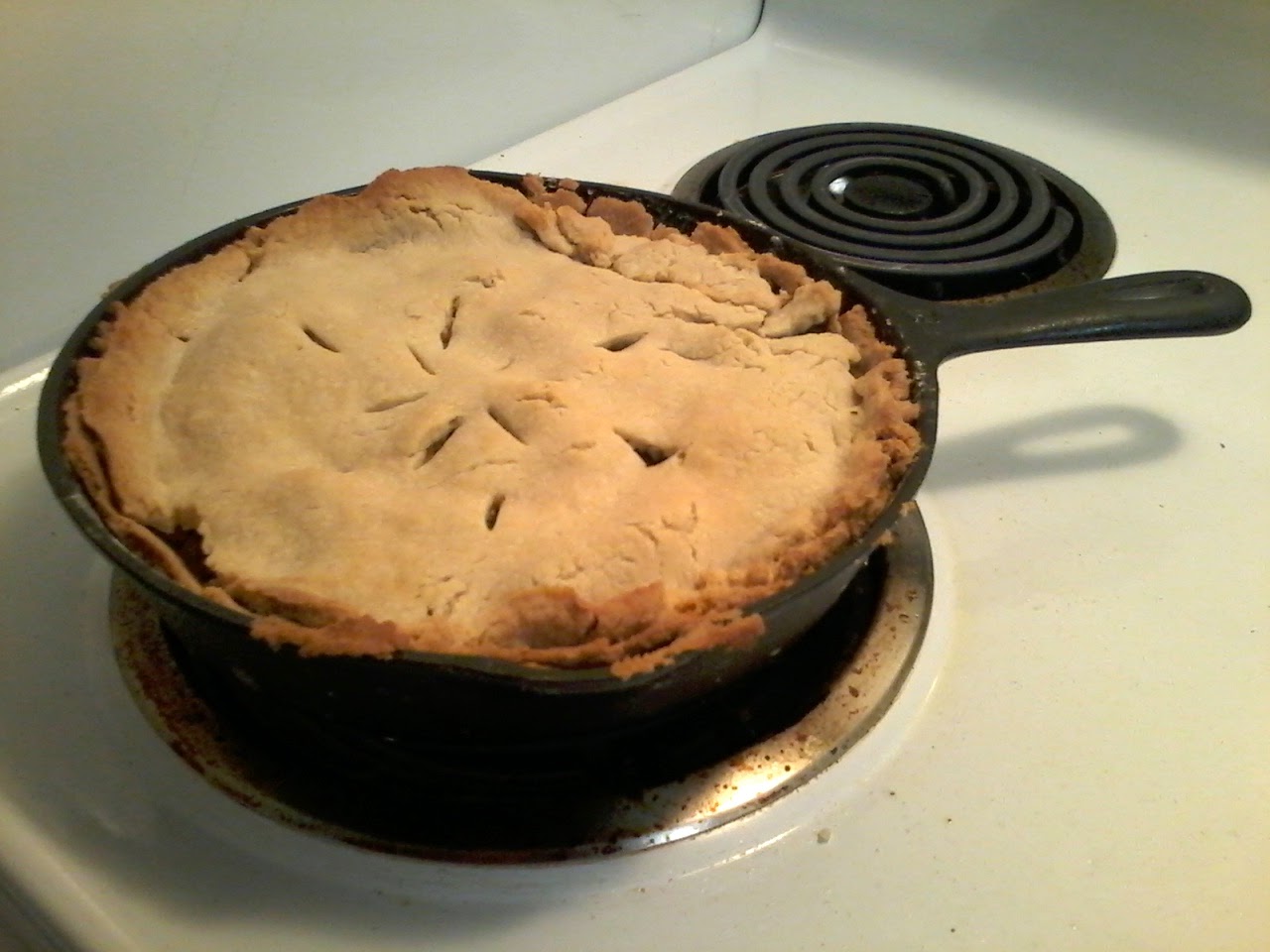 Actually, you know what? While looking up how best to strip and re-season cast iron, we found that people love doing fancy shots of food in their skillets. Therefore, behold!

This may be one of the sturdiest pies we at A Book of Cookrye have made. Rather than breaking, it fell out of the pan with a satisfying whomph! 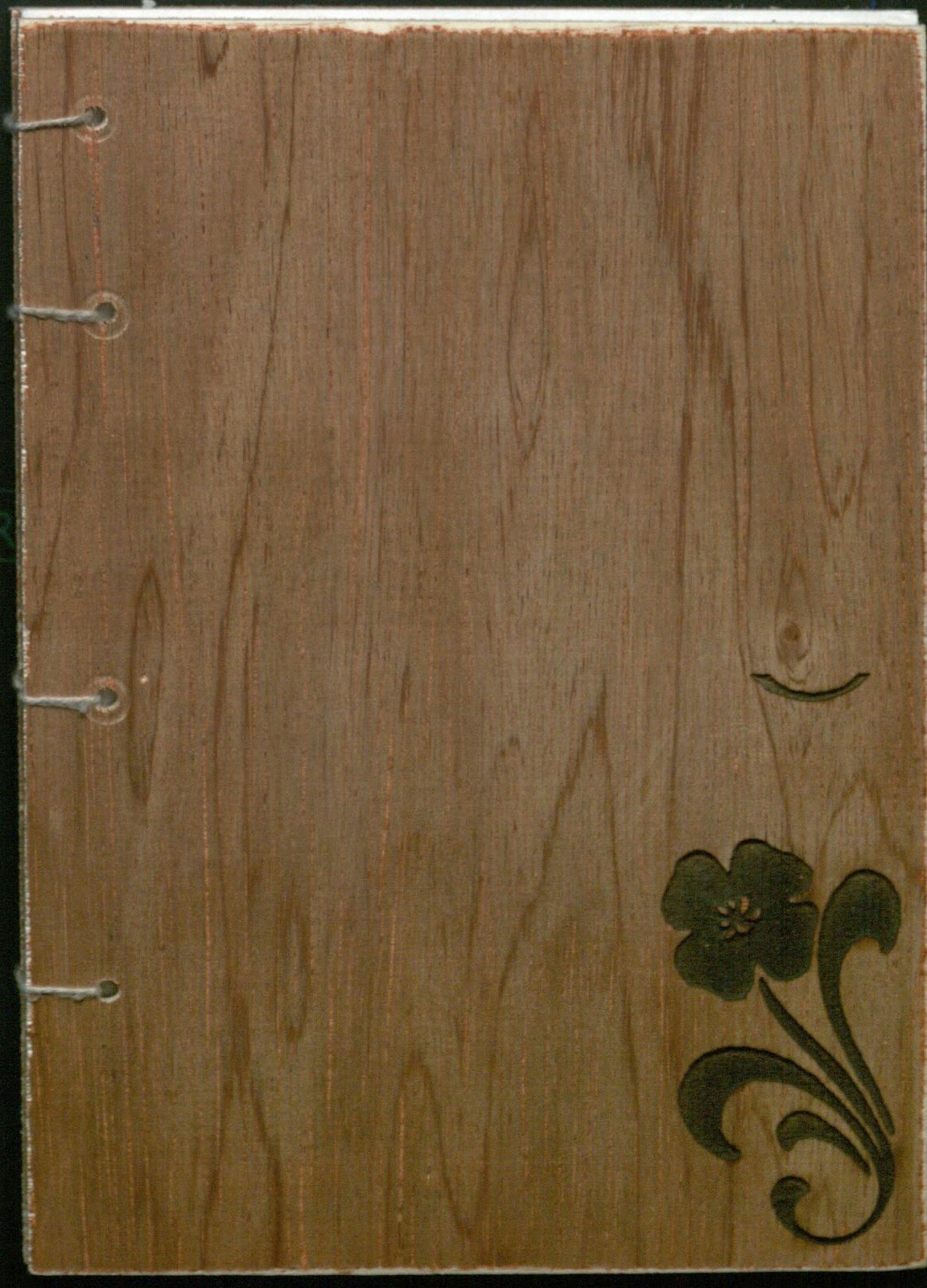 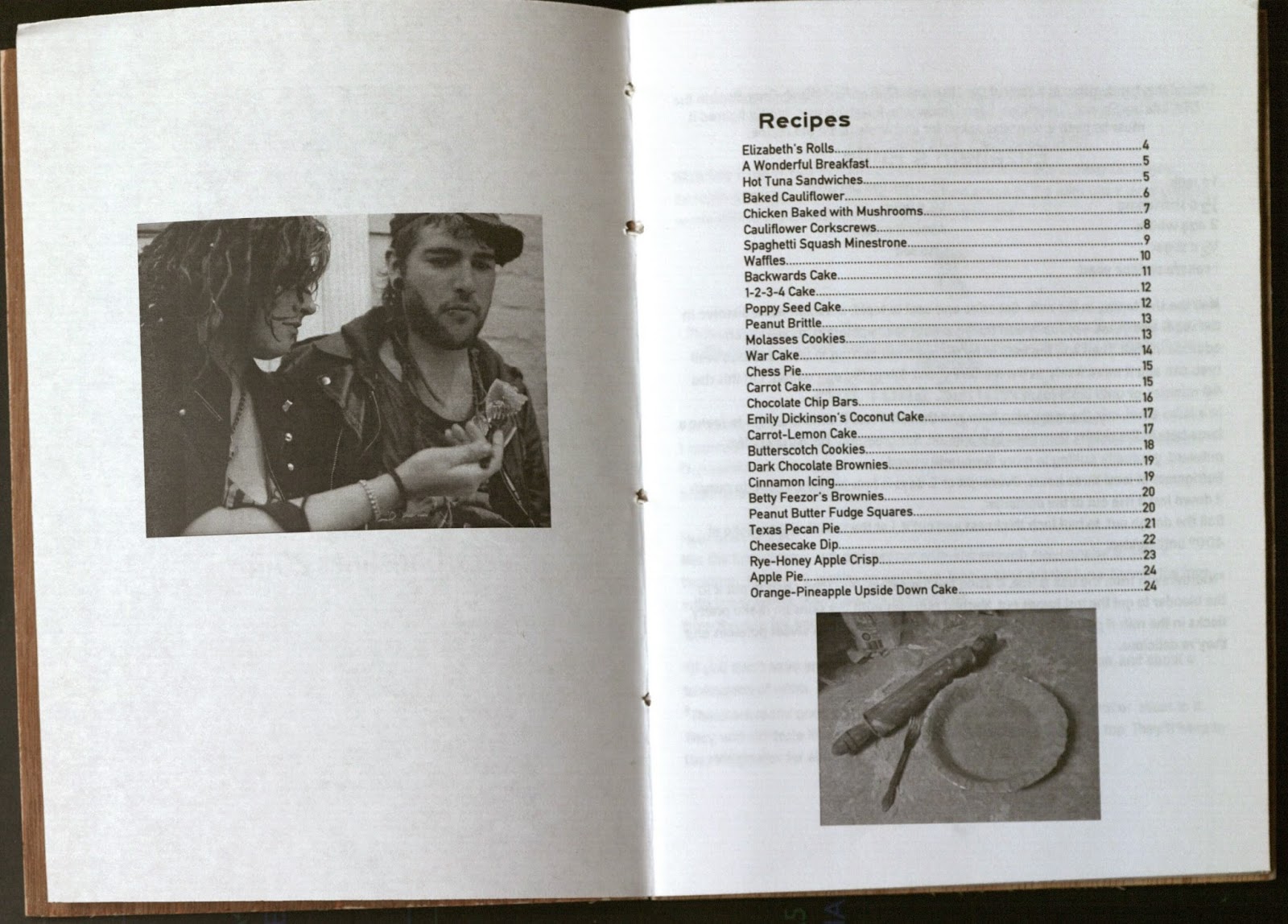