Austrian Cauliflower Soup, or More ways to use pulverized vegetables

We at A Book of Cookrye, like many people in the United States, are aware of what countries most of our family comes from but know little besides where on a map to point. We have neither stories of the old country nor traditions brought over from across the ocean. We may be able to say what countries our ancestors come from and maybe name a city or two, but that is all we can say about that.
With that in mind, we found a book of Austrian recipes in the library. Being part Austrian, we decided to see if anything resonated with us. 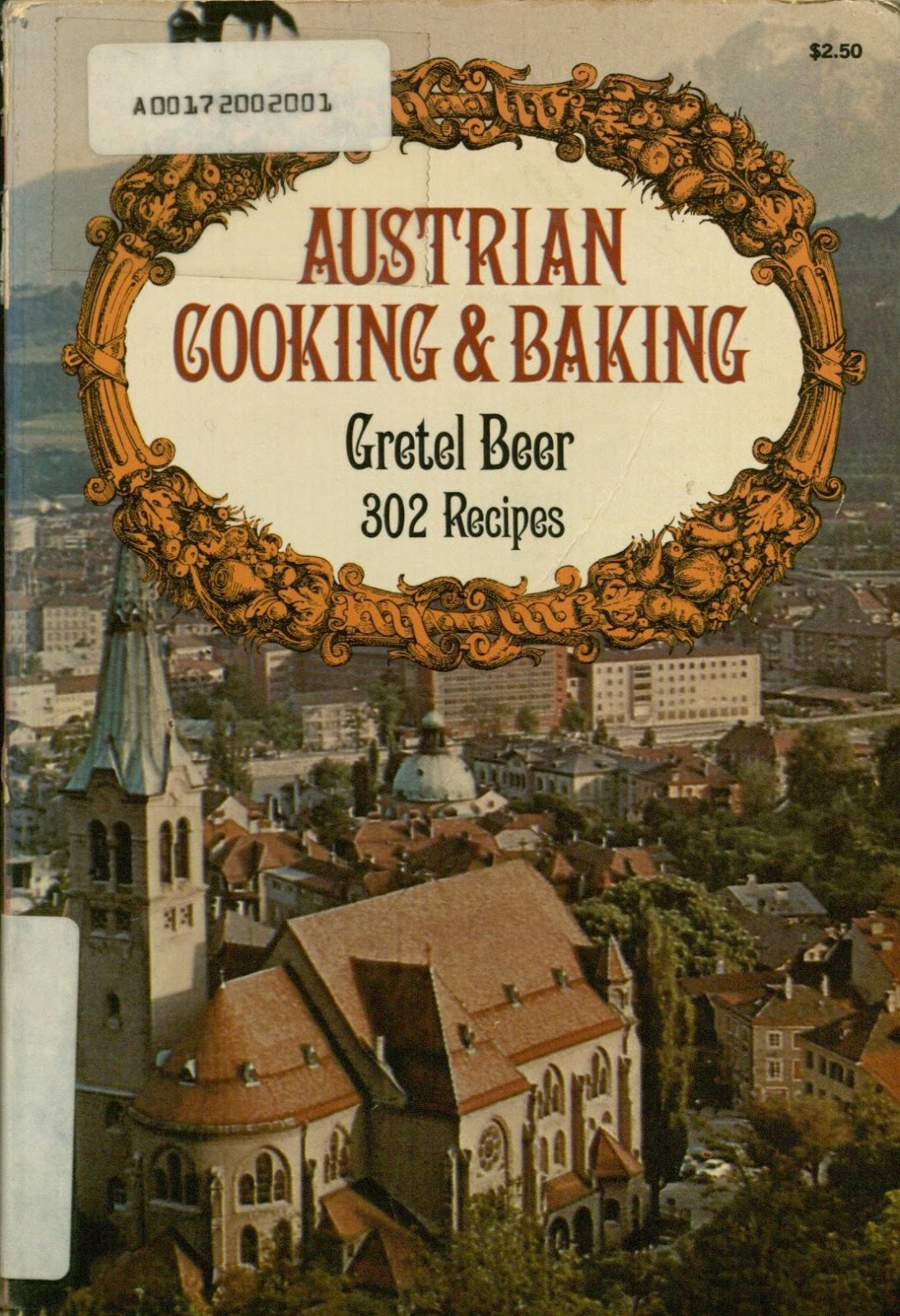 Flipping over to the back cover, the description sold the book to us rather well: it has "171 dessert recipes, and 131 recipes for everything else." That's right, just over two fifths of the book is divided into soups, meats, and vegetables. The rest (viz. the majority) is all desserts. We at A Book of Cookrye considered the possibility that cooking tastes are hereditary. However, aside from things that are common in America anyway, all of the recipes seemed utterly foreign. Whoever would have thought that would happen when reading a cookbook from a country you know nothing about?
We went into the shorter portion of the book instead of the longer one and made this. 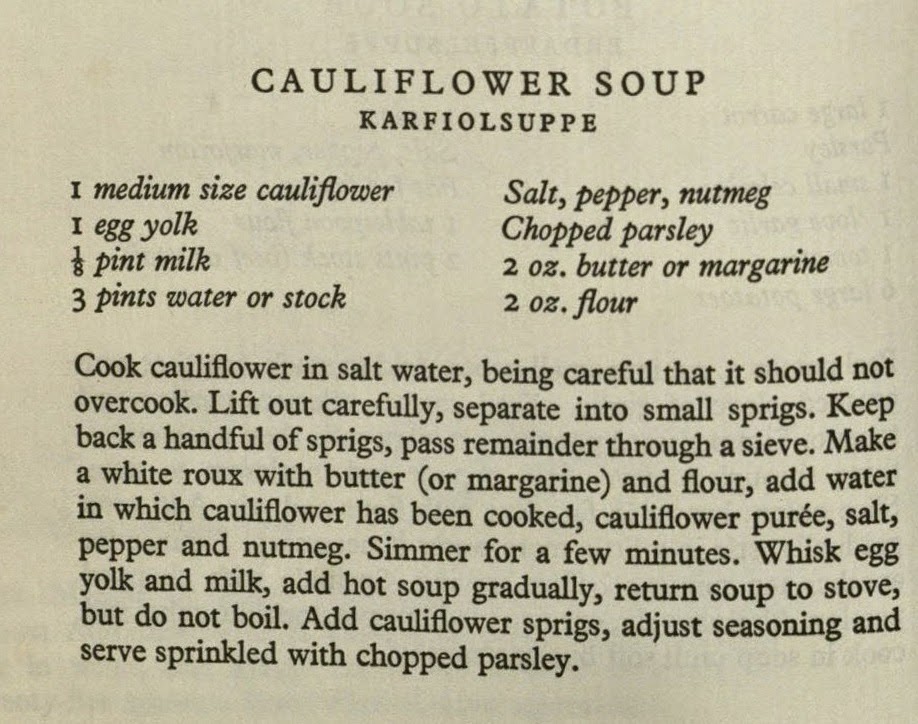 Why is everything measured in pints? Do they use measuring pints in Austria the way we use measuring cups here?
We still had most of the stock leftover from that time we made liver. Given that the last time someone gave us a carton of stock we kept saving it for a later use until it went bad in the refrigerator, we found no reason not to use it all at once. We also used frozen cauliflower because we were going to break it up and boil it anyway. 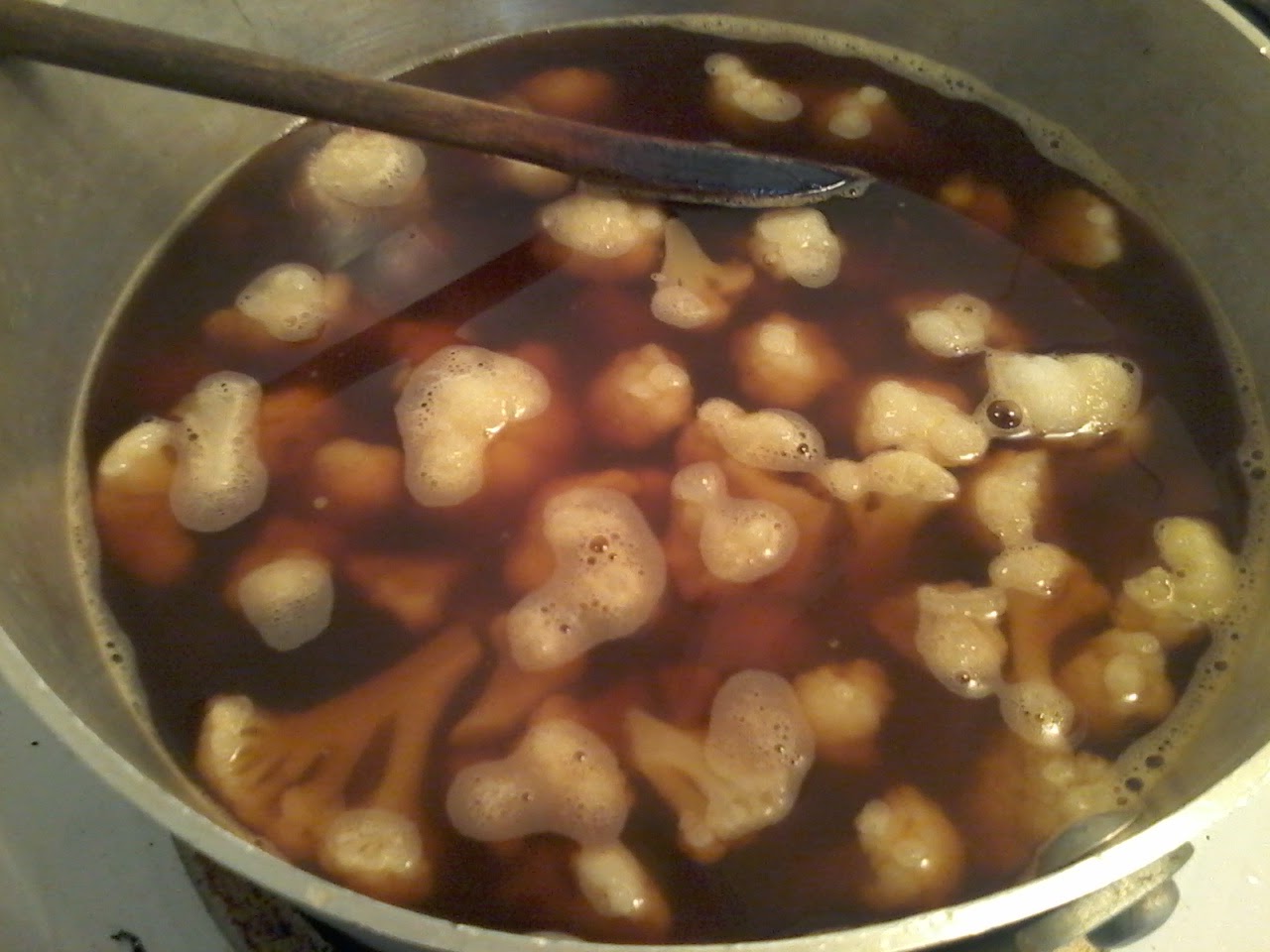 I would just like to point out that every time I make cauliflower, I get asked if I'm a vegetarian. This evening, someone asked "Are you on a cleanse?" Apparently no one wants to eat what looks like broccoli dipped in bleach.
After the cauliflower was cooked (and we do respect Gretel Beer for expressly saying to cook it just until done and not boil it to death), we reached the only point where we and the recipe parted directions. According to the book, we're supposed to shove the cauliflower through a strainer. There is only one way we pulverize cauliflower at A Book of Cookrye. 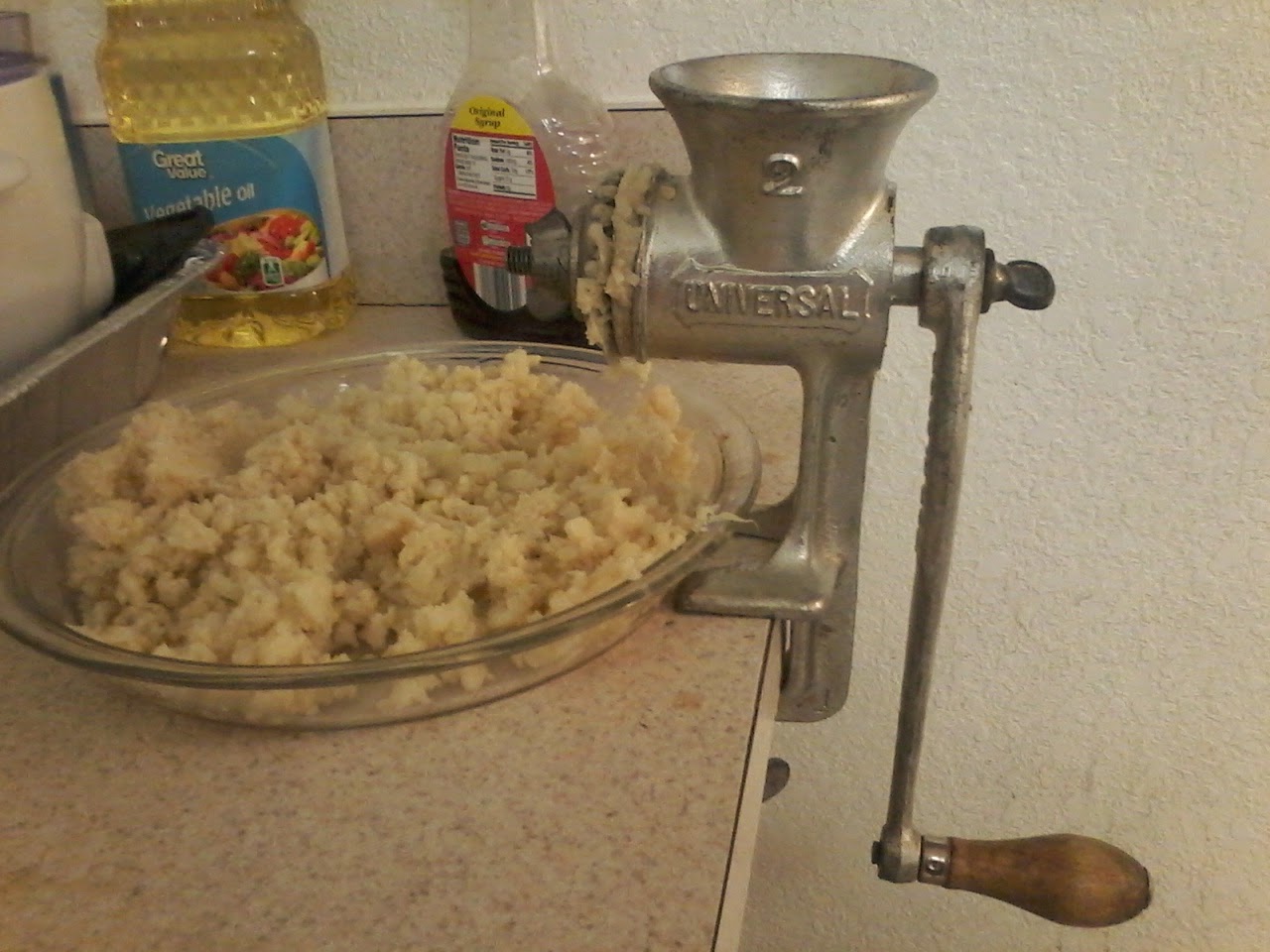 At any rate, we had to find something to put the broth in and... seriously? This is the third consecutive supper recipe that has involved making gravy.

I'm not quite sure what the point of the whole business was, but it made the soup cloudy. I'd like to think that even though I could discern no difference, the flour-butter definitely made one and I'd have noticed it missing.

One of my neighbors came downstairs at about this point and excitedly said "Oooh, it smells like brocolita!" Thus did making Austrian recipes introduce us to a new Spanish word.

I'd never have thought to add nutmeg, but it smelled good. At this point, we were ready to leave it to its last few minutes of simmering. I'm not sure what the milk and egg yolk were supposed to once added to the pot (so much for ancestrally remembering things). Then again, my great-grandfather who emigrated from Austria was a legendarily angry person, so the lack of mind transfer by genetics might be for the best, even if it does mean I know as much about Austrian food as I do the political affairs of Greenland.

It kind of looks like someone got a really big jar of minced garlic and dumped it into a pot. This amplified a concern we at A Book of Cookrye had: without garlic, would we find cauliflower inedible? 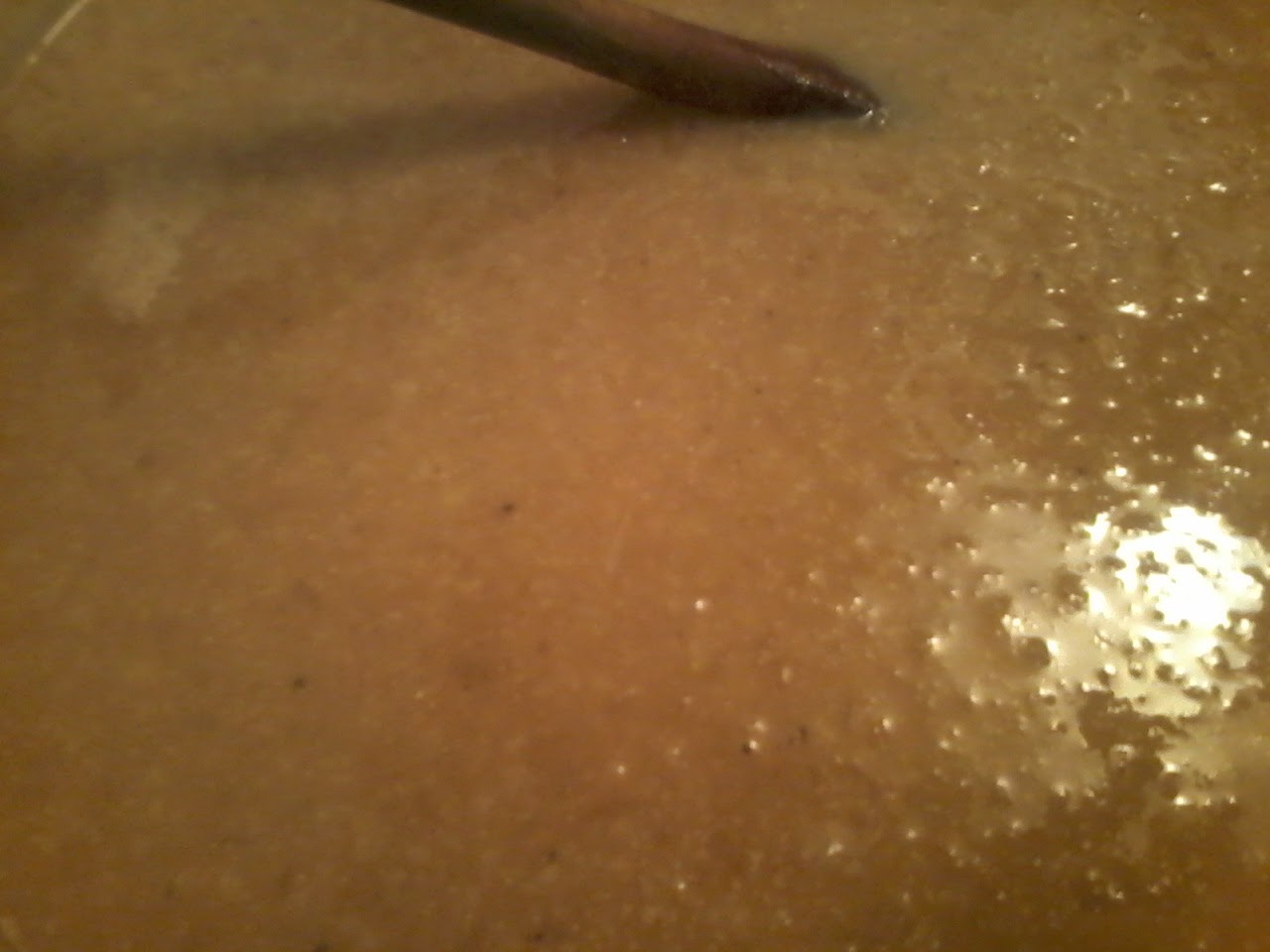 I don't think I've ever seen a soup recipe that didn't involve leaving it on the stove for over an hour, but this one is almost certainly better for omitting this. I do love that the recipe doesn't involve boiling vegetables until the vitamins are good and dead. Also, having woken up during health class long enough to remember that boiling vegetables means a lot of the water-soluble vitamins end up in the cooking water, I like that you make soup of said water rather than discarding it and making soup in a new pot of stock.

At any rate, this soup, despite requiring more bowls than I had planned to get out, is delicious. Nutmeg and cauliflower are surprisingly well-matched, and the parsley on top went really well with everything. This doesn't even seem very foreign to me despite having never had anything like it before. I don't know whether I'm disappointed or relieved about that, but I'm keeping the recipe.
Posted by S. S. at 7:50 AM