Chatters on Parade: A Midterm of Cookrye

We at A Book of Cookrye just survived our first practical exam! Everyone in the class had to draw two recipes the week before test day, and I got assigned a pan of cornbread and peanut butter cookies. As you might expect in a baking class geared toward doing it commercially, they have exacting standards for appearance, uniformity, etc. (Also, your baked perpetration should probably taste good, though they don't emphasize that as much as you may expect.) When we made peanut butter cookies in class, they spent more time telling us that they damn well better have visible fork lines on them than they did saying what they should taste like. And so, I went home dutifully cranked out the official recipe from the textbook. It indeed had the visible fork marks and appropriate spread. 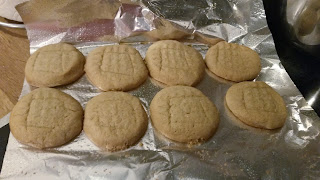 You may have noticed they look just a bit pasty-colored. Just to see what other people thought since these are for a grade, I called some friends and asked them to taste-test my midterm practice. Everyone thought they were oddly bland and really dry.
This is consistent with all the textbook recipes, incidentally. They are all curiously bland. The official brownie recipe in class uses only three-quarters of a small bag of chocolate chips, melted into enough batter to fill one of those massive cafeteria baking sheets.
Anyway, with my midterm grade literally riding on a batch of cookies, I decided to fudge things and make... chatters! After all, they tasted really good the last time I made them.
Unfortunately, as I always seem to do, I waited until the night before the test to get out the recipe. Then, that very night, a storm sent several trees through the local power lines. This meant courteously asking some of my nocturnal friends if I may come over on such short notice and borrow someone's kitchen. 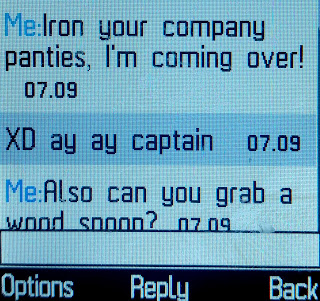 However, since there were people sleeping in the house, other arrangements had to be made. And thus did I pack the toaster oven (which I initially got in the name of keeping garlic fumes out of the house) and a bag of ingredients to set up on someone's carport.

Some people say that the real test of any skill is whether you can do it in terrible conditions. I discovered that I have a lousy memory and forgot to bring peanut butter. For peanut butter cookies. But after borrowing ingredients and repeatedly handing over utensils while asking "lick this clean real quick, wouldja?" we produced a batch of cookies that looked like this! 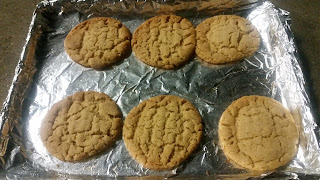 They may not have the stupid fork marks that we obsessed over in class, but they have adorable crackle tops. More crucially and unlike the official recipe, no one ate them and said "They gave me sour burps."
We then all looked at the big bowl of cookie dough and asked ourselves if we really felt like making that many cookies when only six of them fit on the tiny toaster oven pan at a time. We then decided to make American-sized cookies instead.

And so, remembering at 2:30AM that we also had a written test, I returned home to gather my books. Since the electricity was as dead as ever, I asked myself if I really wanted to study in a hot house by the light of an oil lantern. This happened instead.

And so, worried that my cookies would not be the same when made under the drastically different conditions of indoors and in a real kitchen, I took my scrawled recipe notes, desperately hoped to read my own handwriting under the unforgiving fluorescent lights, and made these. 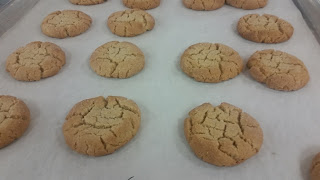