Rumbling Rhubarb returns to A Book of Cookrye

Guess what turned up at the supermarket! 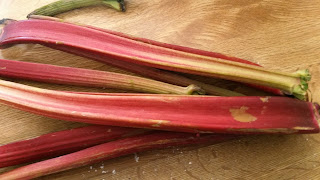 No, it's not celery with red paint, it's fresh rhubarb! Living in a southern enough latitude that the walk from your air-conditioned car to the air-conditioned supermarket can cause heat stroke, seeing rhubarb casually stacked between the celery and the lettuce was quite the surprise. There must be a really big bumper crop in the regions where rhubarb grows, so much so that distributors have sent it down to parts of the country where most of the customers haven't heard of it. If you live further north than I and grow rhubarb plants, do tell-- have they done unusually well this year?
Every rhubarb recipe made on A Book of Cookrye has started with frozen rhubarb because that plant does not like spending its summer days roasting in over 100° days (that's over 40°ish for you Celsius folks) and has an unfortunate habit of dying.
Finding fresh rhubarb prompted the question: Is fresh better than frozen? Can one even tell the difference? More importantly, what really special recipe might one use for this rarity?
That last one is the reason why the rhubarb sat in the refrigerator for longer than it should have. I wanted to make something special because fresh rhubarb simply doesn't happen where I live.
Whenever I find something in stores that either they don't stock or I cannot let myself buy without a discount, I first come home really happy about what I got.and want to make something special to really savor this treat. I then tear through a bunch of cookbooks and a lot of recipes online, trying to find The Perfect One. None of them ever look good enough, so I keep searching while the food slowly expires in the refrigerator. Then, likely as not, I eventually find the perfect recipe and also that the special thing has rotted.
And so, after three weeks without The One Perfect Recipe falling from on high, I decided to make this before the rhubarb turned to compost. 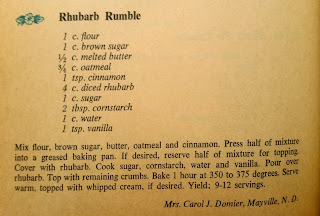 I must note that "rumble" is an odd choice to put in a dessert name. It seems stranger the more I think about it. Usually desserts have dainty (or at least nonthreatening) names like "Lemon Loves," "Red Velvet," "Hummingbird Cake," "Divinity," etc. Yes, there are many exceptions like devil's food. But generally speaking, you're more likely to find rumbling and other ominous noises among the meats and casseroles than among the cakes and cookies.


By the way, it turns out fresh rhubarb keeps extraordinarily well in the refrigerator. After three weeks of hoping I'd find a worthy recipe, this was all I had to cut off. 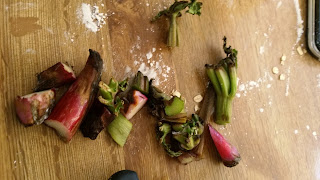 Anyway, you may also wonder what the heck this stuff looks like. Well, imagine someone bleached celery all the way to a pure white, then painted the skin red. 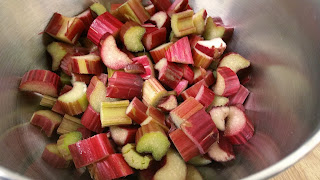 Not only does it look a lot like celery, it tastes like it, too. So much so that (this is no joke) I have every intention of using celery in a rhubarb recipe just to see what happens.
Anyway, this recipe says to serve it warm, which generally means you want to time things so you're pulling it out of the oven right before dinner if you're serving it for dessert. This can create a bit of a conflict of interest with regards to the use of the precious few square feet of kitchen. This brought forth two more questions: Can we get all the pieces of this ready so all we have to do is get it in a pan? If so, do we really want to have to wash a bowl? 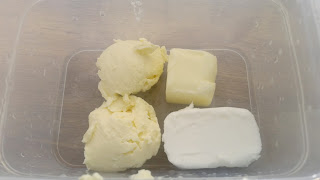 You may have noticed that, having just a little blob of butter, we ended up substituting some margarine and also some of the shortening left over from all the practice pies in baking class. Which brings us to a fun science lesson: Did you know butter and shortening melt at different temperatures?
Seeing a completely intact blob of shortening sitting in the melted butter is definitely not unnerving at all. But enough of that-- on with the sugar! 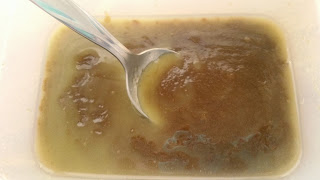 As you can see, there was too much butter for that sugar and it floated on top in a greasy fat slick.  This could only mean one thing: The oatmeal and flour would absorb the butter and become a heart-stoppingly delicious carbohydrate paste!

And so, with a stir of oatmeal, we had the top and bottom of this thing done! For such buttery beginnings, this was really dry and almost sandy. 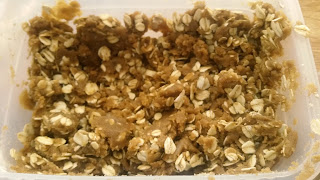 And so, we got on with.... well, the rhubarb was not going near the oven or even a vacant pan yet. For you see, I wanted to start this baking right after dinner for a late-night gathering with friends. However, it seems that around dinnertime, people want to use the kitchen to make dinner which can create a clash of space. And so, I got all the components ready to assemble. The rhubarb went into the refrigerator, as did the tub of oatmeal stuff. Heck, I even measured out the sugar and cornstarch because I am just that good at preparing ahead of time, guys.

And so, as dinner was wrapping up, no one could possibly be annoyed at me for pushing food out of the way to cut up rhubarb, mix things, or have various ingredients slowly conquer the counterspace. That was already done ahead of time. All I had to do was first get the half of the brown stuff into the pan, which proved more difficult than expected because it had turned into butter-sugar sandstone in the refrigerator. 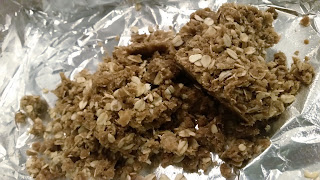 When trying to make half of the oatmeal cover a whole 9x13 pan, I wondered briefly if I might use something smaller. However, I like to have lots of crusty stuff on top of fruit whenever making cobblers (or rumbles, apparently). Were you to make your cobbler (or rumble) in a deep pan, then everyone would get a puny ration of crust on top. But if you make it thinner, there's a lot more of the crusty stuff (with baked-in fruit juice) per serving. 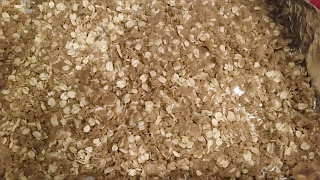 You may notice strawberries in this. That's because a bag of frozen strawberries appeared in the freezer seemingly from nowhere. Since there were only 3 cups of rhubarb whereas the recipe calls for 4, it seemed like a good time to both make up for insufficient fruit and to try this rhubarb-and-strawberry combination so many people rhapsodize about. 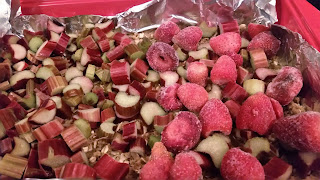 While that sat out, the pre-measured sugar and starch turned into syrup. It's basically lemon meringue pie if you left out the lemons, I guess. If you were one of those weird kids who tried to steal from hummingbird feeders, you would love it. 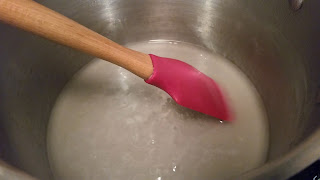 What seemed like a huge mass of sugar slime while in the pot now seemed hopelessly inadequate for dribbling over everything in the pan. 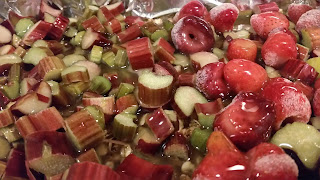 Actually, everything about this recipe seemed promising. We've already discovered how much we like rhubarb, and the last time we dumped syrup over strawberries, the resulting pie had a shelf life of about 2 hours after cutting.

I must admit I was near-certain that I had wasted the fresh rhubarb that one so rarely finds in my climate region. This was the driest-looking thing I've ever tried to pass off as a cobbler. The oatmeal stuff was like dry sand, and there was barely enough syrup on the fruit to make it visibly wet.After an hour in the oven, this would surely have turned into a desiccated mess and possibly burned onto the pan, right? 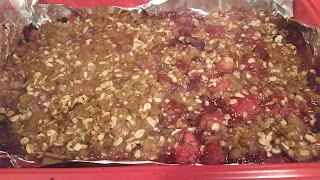 Wrong! About halfway into the baking time, the various fruits started oozing out juice. Before the hour elapsed, the pan was merrily boiling under its crispy crust. 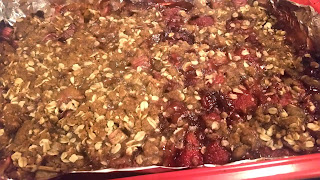 As anyone looking at this may surmise, it was in fact really fricken delicious. For those who doubt, this is how much remained after about 45 minutes. 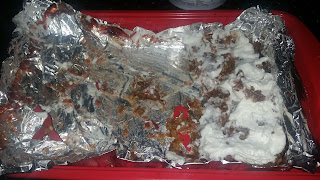 This is a really good cobbler recipe. But I honestly would skip the bottom crust- it went hard and gummy, and got stuck in your teeth the way a Butterfinger does. It'd be better if you just sprinkled all of the crusty stuff on top. But as you can see, made exactly as written, it's pretty good.
And so, to close, let's get back to the question: Is fresh rhubarb better than frozen? Honestly, by the time you've sugared the heck out of it and baked it an hour, you can't tell the difference. Some things may lose flavor if you freeze them, but rhubarb is good either way. That said, rhubarb is really good. So if you've never had it and find it either fresh or frozen, do treat yourself!
Posted by S. S. at 6:02 AM