I Got Slightly Drunk off Divoon Divinity

Today, we on A Book of Cookrye are really really happy to present one of my favorite things ever: Divinity!
This comes to us from a cookbook that I've used quite a bit on this blog:

Divinity is my favorite candy ever. I first had it when I was around 14 or so, and therefore something that's nearly pure sugar appealed to me a lot. I realize I'm supposed to say that now that I've grown up I've lost the taste for such candy and would therefore never eat an entire box of it at once. However, that would require lying.
I've tried to make divinity many, many times over the years. One attempt burnt out my mother's mixer somewhere in the early 2000s. A lot of other times I've gotten this gloop that never actually set. Therefore, I have been trying to make this off and on for some time, and every time been frustrated at the failure.
It seems every recipe I've seen really underestimates how long to cook the syrup, resulting in me having to throw out the failure and face the mess without having any candy. And the few times I tried to do it with my hand mixer..... well, it only managed to do one or two rotations per second once it was all in the bowl. However, today we're using this mixer again. If the company that made the first electric vibrator doesn't know how to make a good motor, no one does.
But this recipe calls to pour out half the syrup and then boil what remains some more. Given that it's impossible to pour it without some running down the side of the pot, this was inevitable.
As the remaining syrup boiled on and I had to keep reminding myself that the burning smell is coming from what's under the pot and not what's in it, the stuff in the mixer somehow glued itself to the beaters.

And in the course of tilting the mixer up so everything would get flung back into the bowl, I forgot the syrup on the stove until it was 20 degrees hotter than the recipe said it should be. But somehow adding it made the divinity stop getting stuck in the beaters. Then I dumped in the vanilla- and a little bit of almond extract as well. Well, I tried to add just a little, but I had a badly timed wrist twitch. The alcohol in the extracts evaporated on contact. Since I was standing right over the mixer working a rubber spatula as the alcohol fumes came off, I got slightly dizzy. 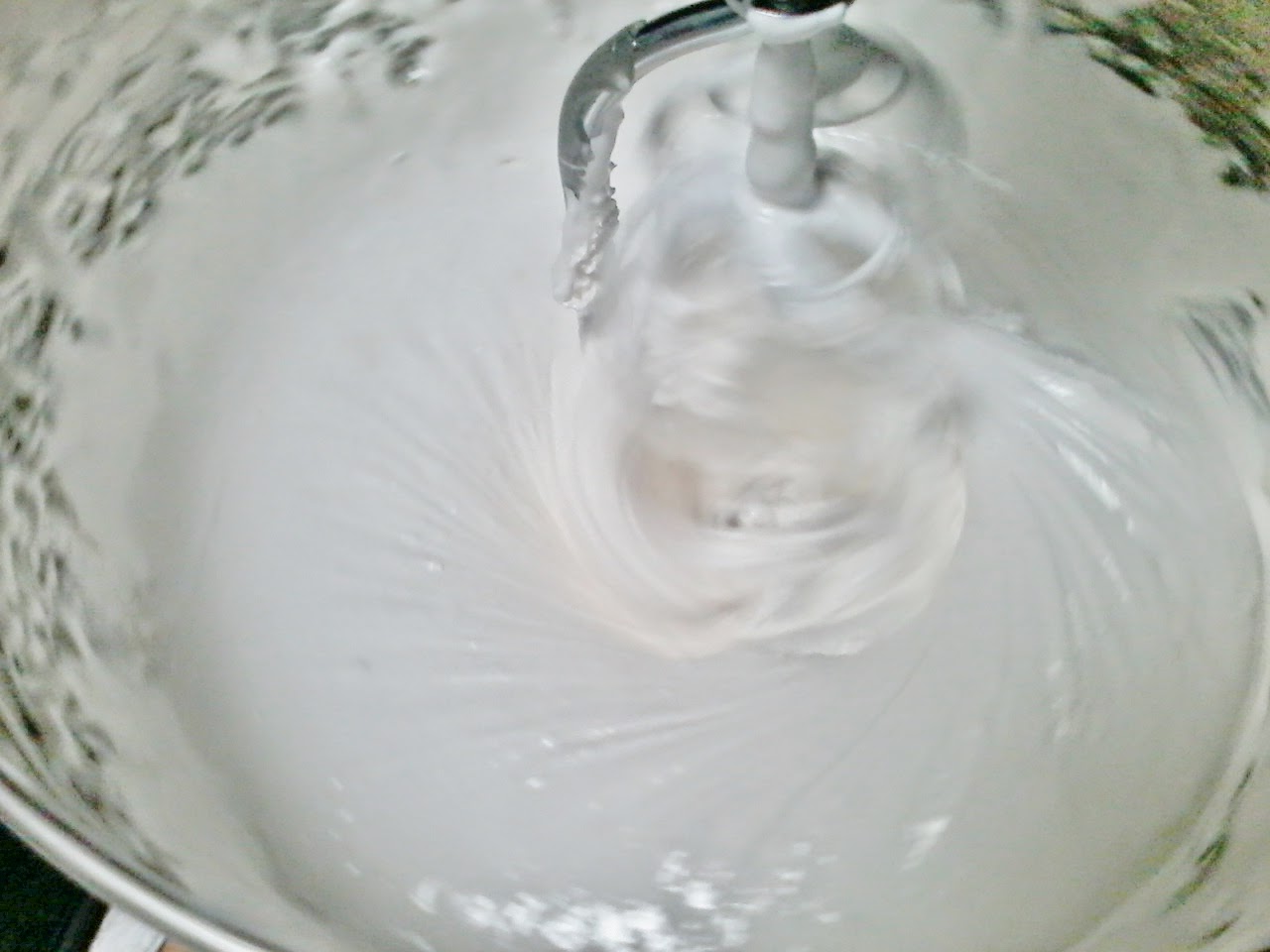 At this point, the mixer was getting kind of hot and was slowing down under the strain. Would divinity outdo a motor descended from electric vibrators? Heck no it wouldn't!
It really goes to show that people who started off with vibrators really know how to make a good electric motor. Behold how thick this got by the time it was done:
It was so, so, so good! I was so happy! I texted Marcus that I'd made divinity and it worked, and that I'd be going his way on my way to visit T and Kelly. The latter two may be remembered from the Pieathlon experience. 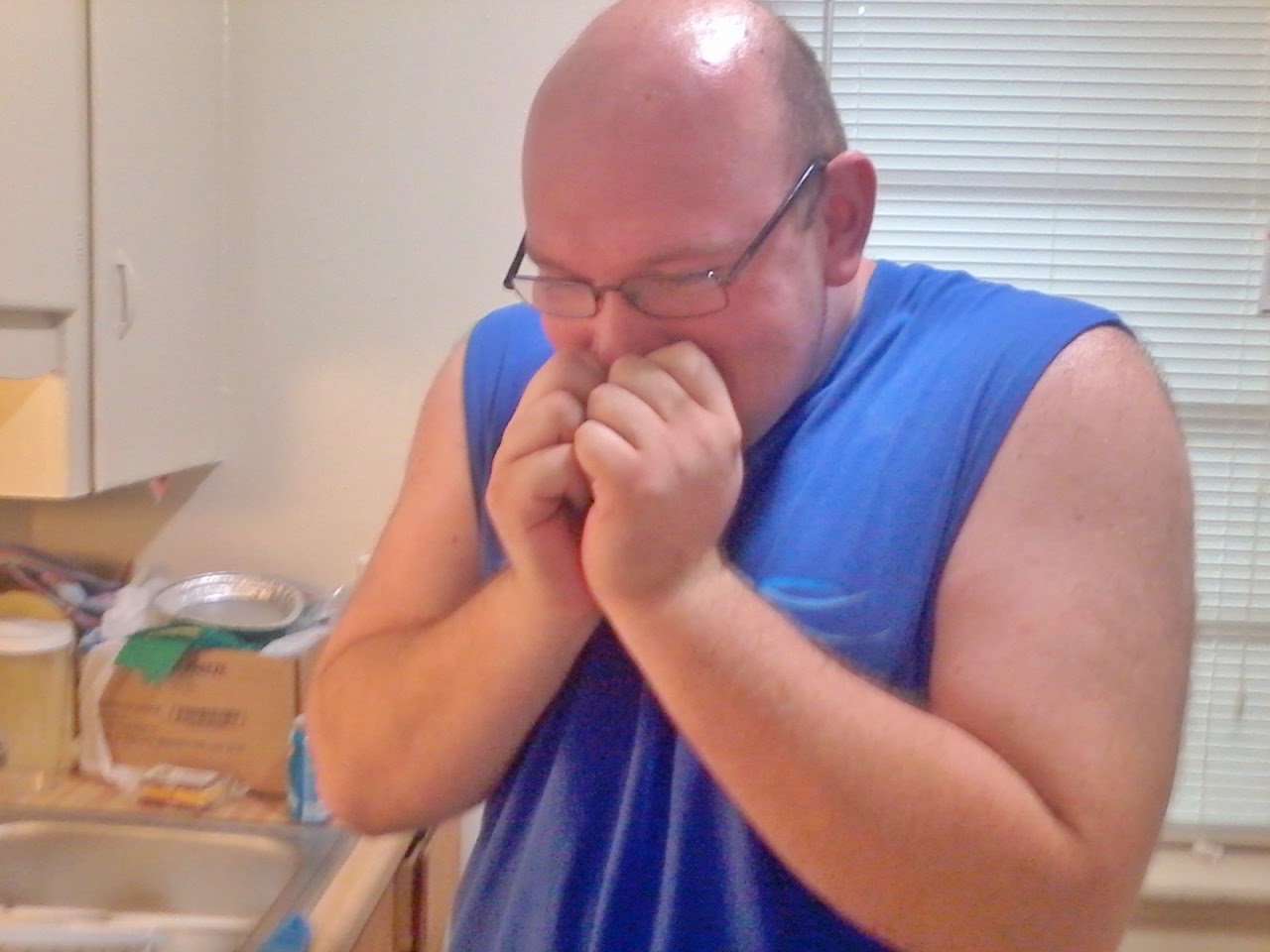 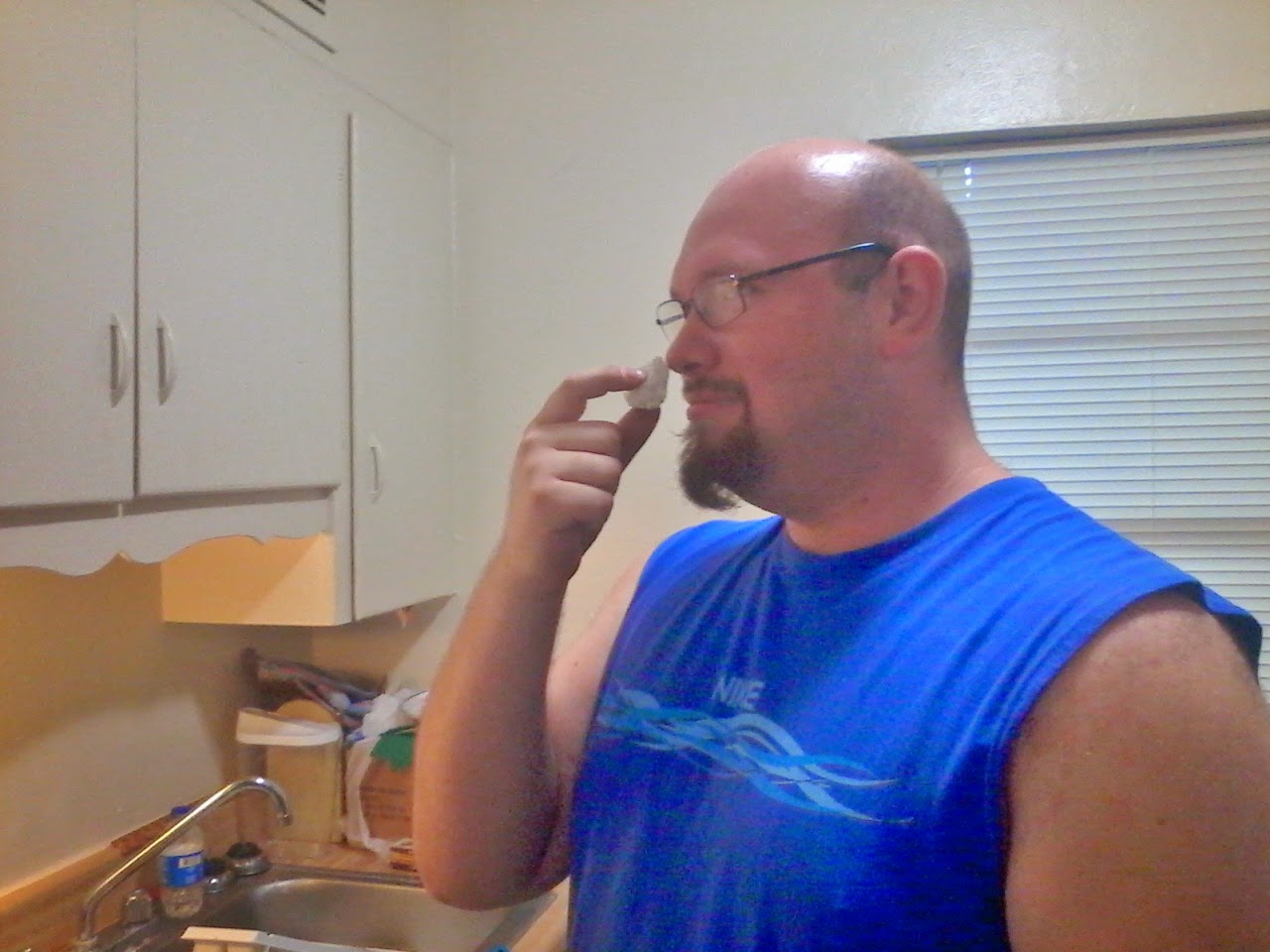 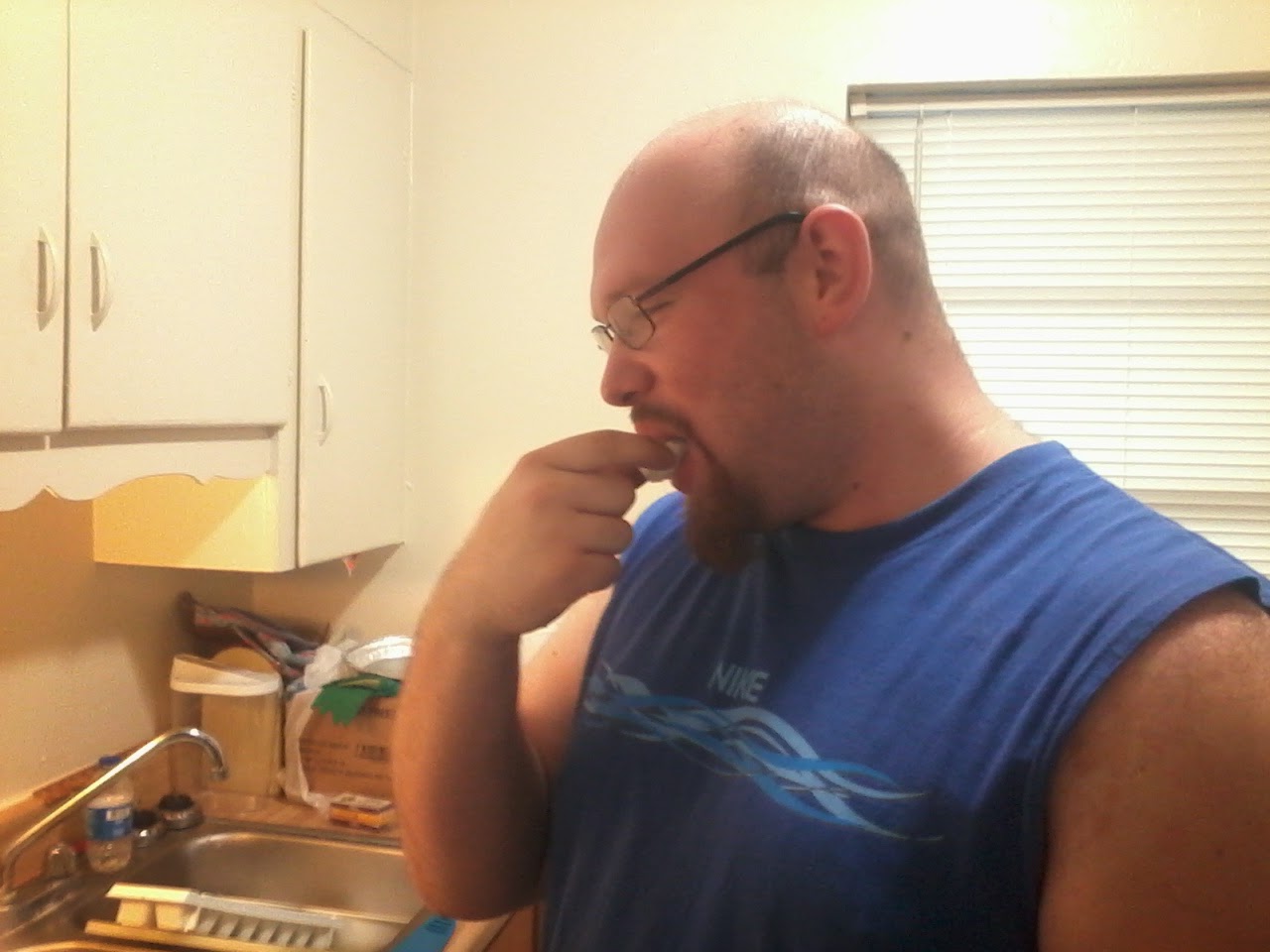 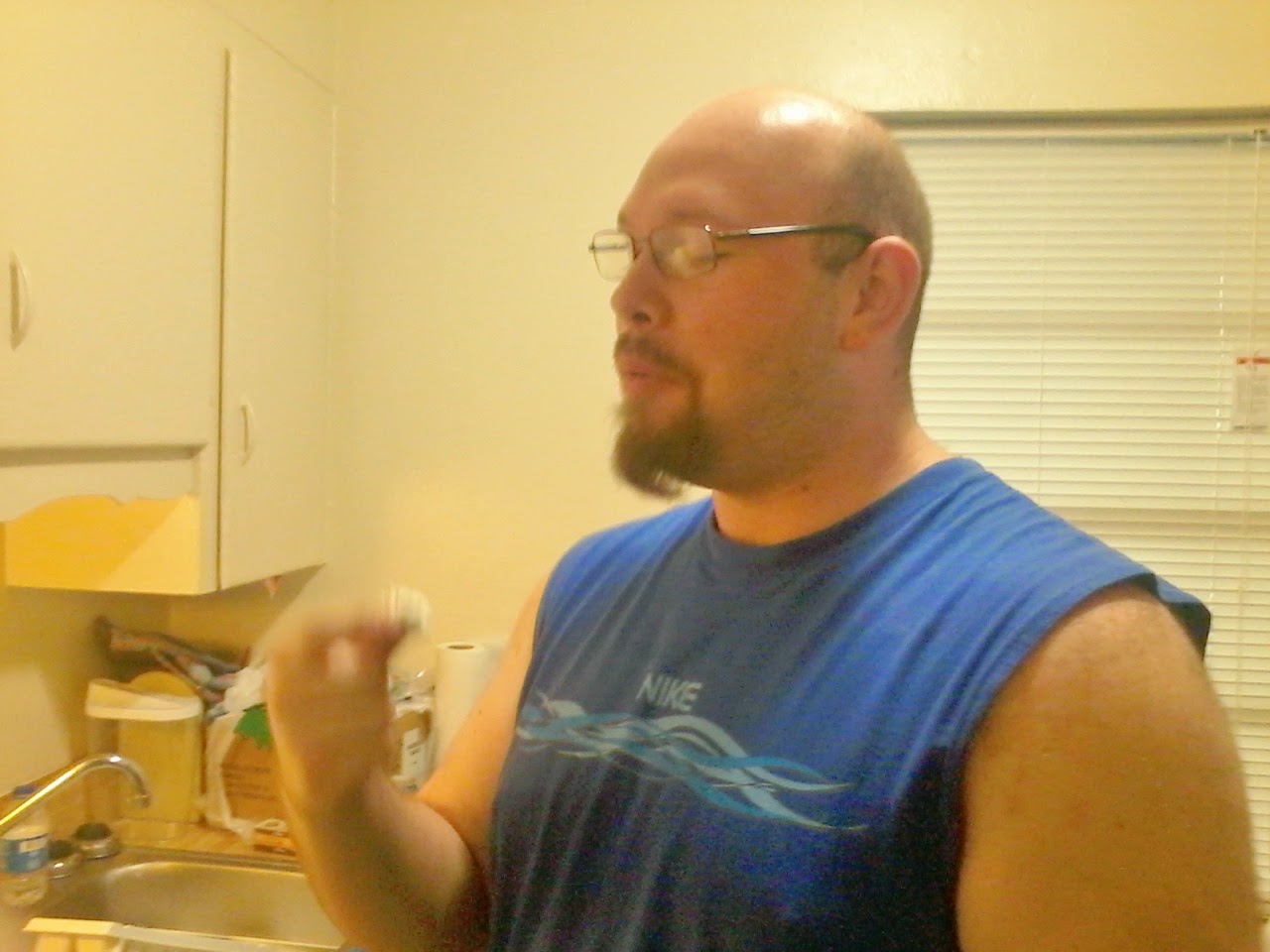