A Book of Cookrye cuts up chicken!

Today, we at A Book of Cookrye present not a recipe but a guide! Well, sort of. One of the biggest things we had to learn in cooking school so far is how to turn a whole chicken into.... this! 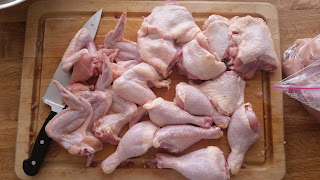 Now, our teachers have oft repeated that cutting up your own chicken is so much better than buying it in pieces. It's cheaper! Furthermore, it's... um, cheaper! Anyway, should you decide to try this yourself for the first time, here are some handy tips that no one seems to mention when doing those tutorials that make it look it infuriatingly easy. (Note: we're not going to try to show how to do it in pictures when there are scads of videos that do it better than non-moving pictures can.)
First of all, you'll probably have to do this a few times to get the knack, so prepare to have a small frozen flock of chicken pieces in the freezer.
Second, if you are a bit squeamish, you might buy two or three rotisserie chickens (for why you're buying more than one, see the sentence immediately above) from the supermarket and cut them up instead of starting with a raw one. That way, you're at least a little prepared for when you get a raw chicken and find yourself facing... this. 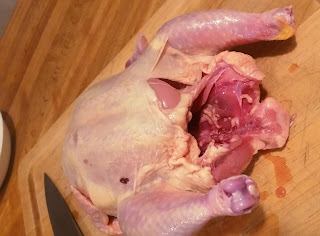 Now, while cutting you're inevitably going to get this squelching sound that, if you're like me, will make you go "eeeeurghhhh..." the whole time. If this bothers you as much as it did me, put on some music before you get out the knife.
We at A Book of Cookrye recommend having two bowls ready: one for the meat you're saving, and one for all the bones and such. Then you can just drop various pieces of bird into a waiting receptacle as you go.
When you cut a chicken the first few times, you're probably going to end up with really sad, mangled-looking pieces. That's totally fine! It's what happens when doing something new for the first time! Just like how my first pies tended to look like this picture right here, my first attempts at cutting up a raw chicken were really sad to look at. But worry not- no matter how badly you may have cut them, the chicken pieces still taste like chicken. Just have a few recipes ready that call for chopped chicken. Tacos, casseroles, soups-- there are many ways to turn even the raggediest chicken pieces into something tasty.

Once you've got the chicken cut up, if you don't want to cook it on the spot, you can obviously freeze it. If you want to separately freeze the breasts, thighs, and other pieces instead of just putting in a big package that says ONE CHICKEN, be sure you label what's in each little container or bag. When rummaging through the freezer, it is harder than you may think to tell whether you have found the legs or the breasts.
All right, so now that you've cut all the parts you wanted off the chicken, you've got a big bowl, of... um...

You could throw the skin and bones away, but since it's already in the kitchen (and you did pay for it), why not turn it into broth?
There are a lot of recipes that make doing your own broth look like an awful lot of work, but most of the fuss and bother is unnecessary. Just add cold water to your pot of chicken parts, put on a low burner so it heats up slowly, and let it sit for about a full day.
What all those happy tutorials never mention about this is that long before the stock is done, your entire house will absolutely reek of overcooked chicken. And the smell will stay with you for days, especially if you have an open kitchen and therefore can't shut the door and open a window. To prevent this, if you have a slow cooker, you can just put it in the garage (or outside if you are sure it's safe from rain, sprinklers, or raccoons) and then not have to live with The Smell.


So, now you may be wondering: is all this bother worth it? Well, if you wanted a full set of chicken pieces (as opposed to, say, a tray of chicken breasts) it might be. Certainly the broth you make from the throwaway parts will taste a lot better than anything made from bouillon powder or bought in a carton, but if you don't make soup or have a lot of recipes that call for chicken broth, that won't matter to you.
But once you cut the meat off the bones and take the skin off of it, you will find that one-third to half the weight of the chicken was throwaway pieces. So when doing price math at the grocery store, you might want to keep that in mind. And so, we at A Book of Cookrye give an enthusiastic shrug as to whether we would do this voluntarily instead of just buying the chicken already cut and shrink-wrapped.
Posted by S. S. at 10:35 AM

Email ThisBlogThis!Share to TwitterShare to FacebookShare to Pinterest
Labels: chicken