Spooning (for) Cowboys: or, Finding out what the heck spoon bread is 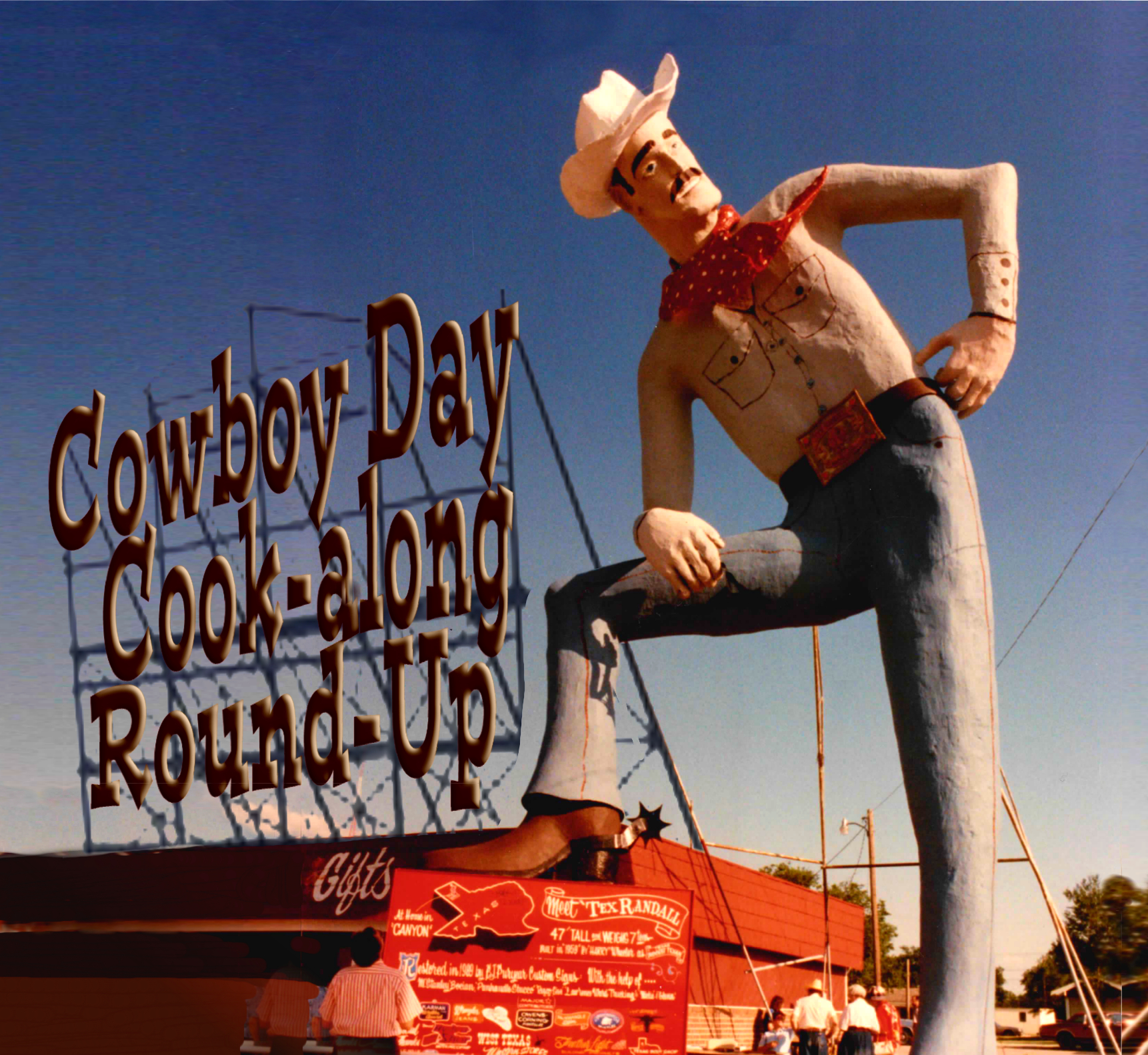 We at A Book of Cookrye didn't know it was National Cowboy Day until Greg at Recipes4Rebels announced it. We at A Book of Cookrye, while we've done recipes from ancient Greece and Rome, recipes from the late Middle Ages. and various other random time periods. But cowboy food? We have... nothing. I mean, we could take a page out of Blazing Saddles and put on a pot of black coffee and a pan of beans, but it is too hot outside to sleep with the window open.
We cracked our recipe books and found a surprising shortage of various hokey 1950s casseroles with "cowboy" in the name and canned soup in the ingredients, and also of actual historical recipes. It wasn't until the night before that we found an actual authentic Alaskan pioneer-era recipe--- which takes multiple days to make because it's sourdough.

With National Cowboy Day starting in just a few hours, we didn't have time to do a recipe that says it will take at least two days. And so, we flipped through the Woman's Club of Fort Worth Cook Book because surely a bunch of Texans in the 1920s would have a decent cowboy recipe. Would they?

We've seen a lot of recipes for spoon bread in various books dating back quite a long time. And we have no idea why it's called spoon bread. Does it bake into this mushy stuff you eat out of the pan with a spoon? We've flipped past various recipes for it many times, so why not have a crack at it? Besides, look at how short the ingredient list is!

I admit that I doubt anyone on a cattle drive would make this unless the cowboys also brought hens for the eggs. It is possible to keep the butter this recipe uses preserved in brine if you really want to. And if you didn't feel like brining butter, there certainly was no shortage of fresh dairy when you're driving a herd of cattle (though oddly I've never heard any cowboys so much as holding a coffee cup under a cow for a couple of quick squirts). Heck, you wouldn't even need to haul a butter churn. Various old Western novels will poetically describe people hanging bags of cream off of a saddle when starting the day so it'd be churned to butter by nightfall. But even though it's technically possible, I don't think anyone was making this recipe on the open range.To make up for not having an actual authentic-off-the-range recipe, would it make things better if I cooked this in a skillet? 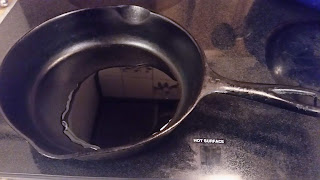 Now, in the modern world I'd just coat the pan with cooking spray. But since we're going for at least some semblance of old-fashionedness and authenticity, we're borrowing from an old cookbook we had that told you to put a huge piece of lard in the pan and leave it in the oven until ready to bake, at which point the pan's gotten really hot and the grease is practically spattering in the pan. Then you sort of swirl it to coat the sides. Since I have no lard lying around the house, we're using cooking oil instead.
All right, let's get to the actual spoon bread! Anyone reading this will note that this recipe makes a lot of whatever spoon bread will turn out to be. Therefore, we're not halving this recipe but quartering it. The recipe says to cook the cornmeal to a thick mush, but it already looked like one before we even turned on the burner under it. 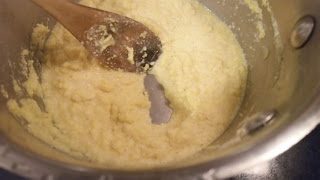 But within just a short few minutes, we had what looked like really gritty modeling clay. I didn't know if the cornmeal was supposed to soften as it cooked, but it stayed really gritty. We took it off the stove when it was so dry that it kept trying to burn onto the bottom of the pot. 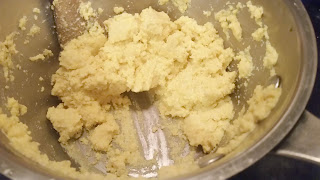 I have to admit, I was wondering if Mrs. Cullen Bailey of Fort Worth, Texas didn't possibly miswrite the recipe amounts. Every cornbread recipe I've ever made was a lot runnier than this. Was there enough milk in here to make soften this out in the oven, or would it be like biting into sand? Well, at least adding the butter made it look... slightly better. Or at least, less desiccated. 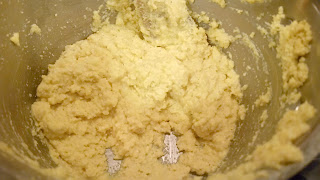 All right, we've only got one more thing to dump in here. I have to admit that so far, this recipe was at least going very easily. It looked like it fundamentally wouldn't work, like it'd come out of the oven a gritty mess. But at least it had so far taken less than five minutes. 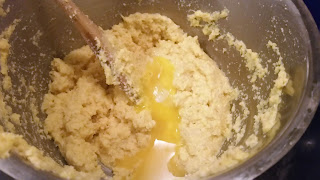 All right, here we get to the only fussy part of the recipe: beating and folding egg whites! (Well, only one egg white because no one was going to eat a huge pan of spoon bread in one night unless it turned out to be a lot better than the ingredient list suggested.) We briefly considered trying to give ourselves an old-fashioned cooking experience by hand-beating the egg whites to a stiff foam. But common sense prevailed after only 45 seconds. We got out the power tools. 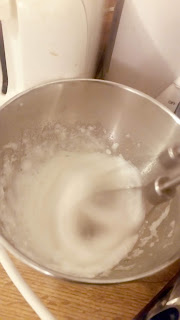 Less than one gloriously modern minute later, the one egg white had turned into a gloriously fluffy foam! 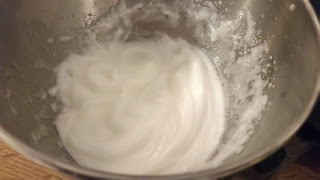 All right, we're closing in on the end of this recipe, and it's starting to look a lot like cornbread. Is spoon bread just another name for cornbread and we never knew? All this time we've flipped past spoon bread recipes, swearing we'd someday find out what the heck spoon bread is, and it's just the same stuff you can get out of a Jiffy box? 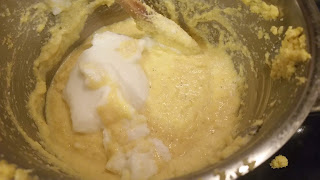 Well, spoon bread turned out to be surprisingly normal for something we've never made before. Ineed, our exciting road of discovery seems to be ending at a rather bland stop. As a brief note, we at A Book of Cookrye grew up eating cornbread with so much sugar it was practically dessert. Also of note, it seems no one we know can agree on whether sweet cornbread is Northern or Southern. Interestingly, everyone we know insists that the sugared version comes from whichever side of the Mason-Dixon line they are not from. My northern friends make fun of southerners for turning cornbread into cake, and my Southern friends, when seeing someone put sugar into cornbread batter, will mutter "Oh, you're making it yankee style."

But who knows, maybe spoon bread batter turns into something completely different from cornbread in the oven. Even if it doesn't we at A Book of Cookrye got at least one very nice discovery out of this venture: Our toaster oven can fit a skillet. 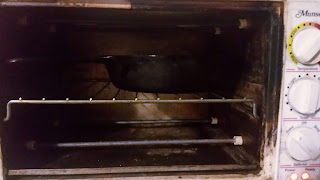 We at A Book of Cookrye, doing our minor bit to save energy, baked this in a toaster oven set up in the garage. It (obviously) uses less electricity than the big oven, and it also doesn't give the air conditioning more work to do. Though in retrospect, I should have moved the toaster oven to the yard so I could at least truthfully claimed that I actually made the Cowboy Cookalong recipe outdoors. 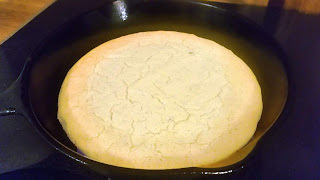 And so, as we at A Book of Cookrye had come to suspect about halfway through the recipe, we set out to make something exciting and new and ended up making cornbread. But that's all right because as we all know, cornbread and chili are not only both perfect for Cowboy Day, but perfect for each other. Furthermore, this is really good cornbread. It's just a little bit more dense than what we're used to, but it also holds together really well for dipping into whatever stew you're serving it with. 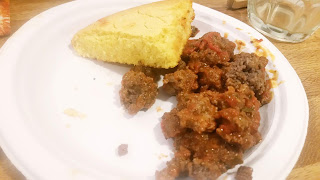 I could pretend that I actually did make a pot of chili (or at least open a can of it), but to be honest I had an oddly specific craving for beef in spaghetti sauce. With cornbread. I'm (not) sorry, but I even put Parmesan on top. 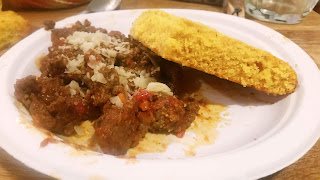 But for the record, not only does putting enough oil to fry the batter in a hot pan make the bottom and sides of your cornbread deliriously crispy and brown... 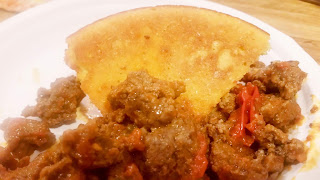 ...but it means that absolutely nothing will stick to the skillet. This is what it looked like after I wiped it with a paper towel. 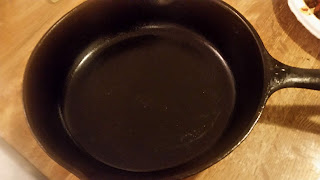 I think we can agree that anyone cooking out on the range where the deer and antelope play and where there is absolutely no running water would appreciate just wiping off a pan and calling it clean. Happy Cowboy Day everyone!