Schnitzel: or, The classiest, European-est way to make one steak feed five

Do steaks rarely happen in your house? Do they only appear when you find them in the discount bin, priced so that they leave the store before they soon expire? Today, on A Book of Cookrye, we proudly present a way to turn one steak into at least five! See this little piece of meat? 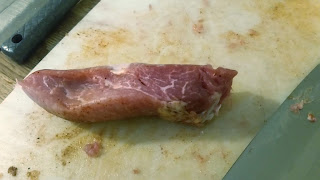 Well, by carefully directed impacts (read: whacking it with a mallet), we're going to turn it into something... bigger. Something more. Something greater than itself. Now, you may not have a meat mallet, which is totally fine. You can bash the meat with an unopened soup can for the same result. (Hold it in a thickly folded cloth to be nice to your hand.) To avoid waste, you can just wash the can and put it back when you're done.
You may be wondering, when is the meat thin enough? Believe it or not, you're going to keep beating your meat until it's about an eighth of an inch thin. That previously dainty small meat slice is now big enough to drape off the edge of the cutting board. 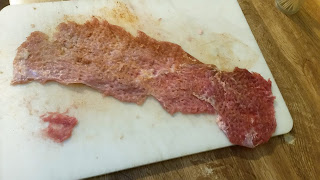 Anyway, the rest of this recipe is really straightforward. You season the meat, dip it in egg, then in breadcrumbs. It'll hold together better if you then let it just sit out for 20 minutes or so instead of putting it directly in the pan. I mean, if you're in a rush you can just cook it right away, but half the time the breading falls off without this extra time to set. I guess you can use this extra time to clean up the meat splatters from all around the kitchen.

Now, the traditional, very German way to do this involves a frying pan and (obviously) a lot of butter. You can use cooking oil in a pinch, but you owe it to yourself to do these in butter at least once. I mean, these are already about equal amounts meat and breading, so you don't need to even try to pretend this'll be a dinner made for dieters. 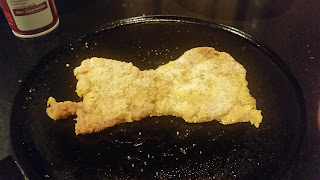 Especially if you're cooking on cast iron, you can turn the burner up extremely hot. The meat is so thin that you really don't have to worry about it burning on the outside while staying raw in the middle. And the way the butter browns while cooking into the breadcrumbs will make this utterly amazing. If your kitchen has good ventilation, I would suggest keeping the pan hot enough to smoke just a little- the breading gets marvelously crunchy. However, if you have one of those stupid recirculating stove vents that doesn't actually take the smells out of the kitchen, you may well decide that cooking in a butter-smoke haze isn't worth it and turn the heat down a bit.

Now, you may think to yourself that you really don't want all the gratuitous butter-derived calories in your dinner. Well, we at A Book of Cookrye, where a love of food is forever colliding with a desire to be pretty, have already tried to bypass the butter and can tell you the results.

And honestly, the meat comes out rubbery and sad. You may think it's because overcooked it, but I was obsessively watching it and took it off the grill as soon as it was done. So yeah, just give in to the butter. Embrace its buttery goodness. It is your friend. 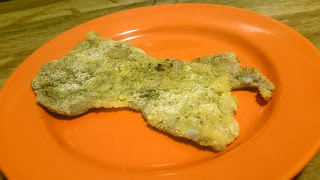 Actually, that is a really ugly picture to end this with. It doesn't do schnitzel justice at all. Luckily, I made it again at a friend's house, where we served it on top of spaghetti (which you really oughta try). 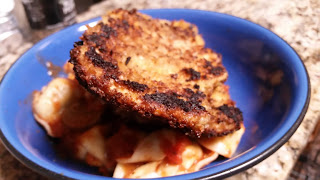