As long as you've cut up your own chicken, why not make stock?

Today on A Book of Cookrye, we're going to talk about something that comes up in a lot of recipes: Chicken stock! I know, you're excited already.
Anyway, since we recently did a brief dissertation on carving your own chickens,  we figured we might do a favor to whoever read our writings and decided to try it for themselves. We're going to talk about what to do with the massive pile of skin and bones that's left over. Because there's going to be a lot. 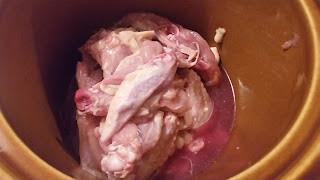 There are a lot of recipes that make doing your own broth look like an awful lot of work, but it really isn't hard. Just add cold water to your pot of chicken parts (I usually add enough water to cover them by about an inch or so), put the pot on a low burner so it heats up slowly, and let it sit for about a full day.
This is also a great way to use up unwanted extra produce in the fridge that's looking kinda squishy but is still technically edible, and various scraps like celery roots, onion peels, pepper cores, and stems from parsley or (whatever fresh herbs you used for some recipe). Just drop them in the pot.
You'll know the stock is ready when the bones just about crumble to mush in your hands. We at A Book of Cookrye prefer to add no seasonings at all, not even any salt. That way we can put it in any recipe we like with no clashing of spices.
Anyway, you may notice I'm not putting this in a pot on the stove but in a slow cooker. That is because by the time the broth has cooked long enough, the smell will take over your house and drive you nuts. And it will stay in your house for days. And it won't even smell like good chicken- it'll smell like chicken you overboiled until quite dead. (Which, technically, you did.) If you use a slow cooker (or a hot plate and stockpot), you can just put it in the garage (or outside if you are sure it's safe from rain, sprinklers, or raccoons) and then not have to live with The Smell.
As soon as it's done, you'll want to strain out the meat (which, as many older recipes would say, "has been reduced to rags") and cool the broth off.


Now, I've put still-steaming bowls of broth directly in the refrigerator. While it does cool them off overnight, your entire refrigerator and freezer will smell like overcooked chicken for weeks. You really want to get it down to room temperature before you put it in the refrigerator- but if you just leave it out on the counter it will take forever to cool.
An quick way to cool the stock off is to put the bowl into an even bigger bowl (or stewpot) of ice water and stir it for a few minutes. It will come down to room temperature really quickly. But perhaps, as with me, your ice maker has broken, you don't have a lot of ice cube trays, and you don't want to pay for a bag of ice just to near-immediately melt it making chicken stock. Don't worry, we at A Book of Cookrye have you covered! After you have put the stock on to cook, just take the bowl you were planning to strain it in, put it in a much bigger bowl/pot filled with water, and put something in the inner bowl to make it sink into the water. Then pop it into the freezer until the stock is ready. 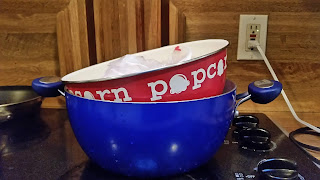 But maybe you don't have the enough  freezer space to squeeze in a big pot. Well, don't worry. You know how you needed to put some weight in the bowl so it can sink into the water? You can take whatever is occupying the freezer space intended for your ice pot and just drop them in the inner bowl to weigh it down (after all, since it's going back into the freezer immediately, you don't have to worry about thawing whatever you took out). 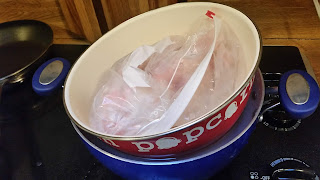 Anyway, by the time the stock's finished cooking, you'll have an ice nest to surround the bowl of steaming broth on all sides. 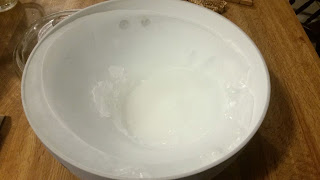 And thus, whether you had ice in the refrigerator or not, you can totally get the stock cold enough to not steam up the refrigerator! When your stock's done, just strain it into the inner bowl and stir it for a few minutes. After a surprisingly short time, your stock bowl will be bobbing up and down in a pot of freshly-melted water, and the stock will be room temperature if not a little cold.
So let's take a brief aside and talk about the grease that will inevitably have come off the various chicken pieces. There may be rather a lot of it. While it's true that few people actually want soup with a thick grease slick on top, just leave it when you put the stock in the fridge. A lot of people try to obsessively skim the fat off right away, but we find it easier to leave it in the refrigerator and pick it off the next day when it's solid. You'll save so much time and tedium. Instead of carefully trying to skim the fat off which could take forever, why not let it harden overnight and then just spend a minute or two lifting this off with a slotted spoon instead? 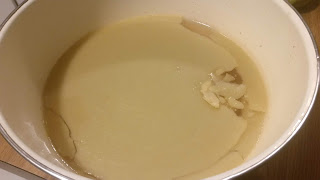 Now, a lot of people would just throw away the chicken fat, which is a real shame because it can make so many dishes amazing. We will discuss the many uses of chicken fat another time. But for now, you have a big bowl of cold stock with the fat taken off! Now, the standard advice in nearly every recipe book I've seen is to freeze it in ice cube trays. Supposedly it's the just so easy to just pop out broth cubes as you want them. But we at A Book of Cookrye feel that is ridiculous. You would need a medium-sized army of ice cube trays to freeze the broth from just one chicken, and said army would conquer all the space in your freezer. Instead, just use any old storage containers you like. You can freeze it in one big container if you think you'll be using it all at once in one big pot of soup. Or, if you tend to use it one cup at a time in various casseroles or rice or what have you, freeze it in containers of that size (or in baggies). 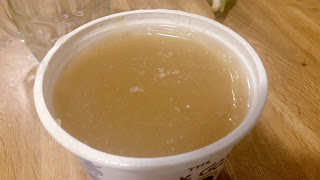 As a final note, did you know that cooking shows in the 90s used to glibly say that if you didn't have chicken scraps lying around the kitchen, you could just run out and buy a bag of wings to boil? Time and food fads do change, don't they?
Posted by S. S. at 11:16 PM