Hump-Day Quickie: Those no-bake cookies it seems all my friends made

Sometimes it seems like I missed out on culinary experiences that all my friends had growing up (well, the ones who like to cook). My mother never bought me an Easy-Bake Oven, something I never thought about until I was much older (and after seeing these two grown adults attempt to bake in one I'm glad I never got an Easy-Bake when I was in Hasbro's target age demographic). And, more relevant to today, it seems half of my friends' first recipe they made (mostly) by themselves was this:

If my mother ever made these I don't remember it, though an informal survey of my friends suggests that this recipe was (and probably still is) a popular go-to among parents who wanted a low-effort, single-pot treat for the wee ones. As tends to be the natural progression of things, a lot of my friends in turn made these as their first recipe, first helping to stir the pot and then doing it all by themselves.

When we were all still too young to drive, a lot of my friends would bring down a saucepan and a canister of oatmeal and make this recipe which they had memorized since their parents first allowed them to use the stovetop. I had no such nostalgia for these, and my opinion was somewhere between "eh they're not bad" and what Laura Shapiro said when she wrote that "a no-bake isn’t an actual cookie by any definition except the lamest. It’s a placeholder, an apologetic reminder that somewhere in this happy land there are cookies, but not here."

If you think Laura Shapiro is being too hard on an innocent cookie recipe, some context may help. You may remember our previous discussion of the First Lady Cookie Bakeoff, where a now-defunct magazine pitted the wives of the two front-running presidential candidates against each other in a cookie recipe contest. One year, Cindy (Mrs. John) McCain sent in this recipe, apparently taken right from the Quaker Oats website with the brand names hastily deleted from the ingredient list. Laura Shapiro was not savaging a back-of-the-box cookie recipe for existing among someone's frequently-used clippings or appearing on a table in someone's house, a potluck or a bake sale. Instead, she was noting that it was spectacularly out of place for nationally-published recipe contest. Though she does ask what a lot of us were thinking: "As for the staffer who decided that a no-bake was an appropriate choice for a baking contest, was this an act of chutzpah, domestic naiveté, or a mysterious passion for culinary oxymorons? You decide."

This recipe may have started on the back of a Quaker Oats can, but it has certainly gotten deep into our culinary psyche. It shows up in nearly every fundraiser cookbook from the last twenty years. I say this because as soon as I started making these, I was inundated with helpful corrective commentary from everyone in the house. Actually, I got recipe changes before I even got anything in the pot in the form of handwritten recipe annotations. The peanut butter was taken right out of the recipe and replaced with dairy butter. (Always follow the handwriting in a compilation book.)

Great offense was expressed at pouring the mixture into a pan instead of dropping it by the spoonful like chocolate-oatmeal pralines. I was informed that "when I was growing up, Mom did something with cold water whenever she made these." (Apparently boiling times can't be trusted; use cold-water candy tests instead.) And only after extensive discussion was I allowed to follow a suggestion from The Nostalgic Cook (whose Osgood Pie was easily the most delicious Pieathlon we've had to date). She removes the peanut butter, as does the person whose editorial pencil passed over this copy of the recipe.  She also adds something else: 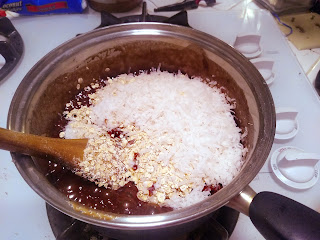 Yes, we are using half oatmeal and half coconut. You can't really see a difference after the chocolate has subsumed them. 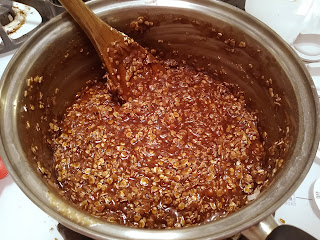 One thing I do like about not baking cookies: you don't need to come up with enough pans to hold them all. You can just unroll several feet of aluminum foil right onto your countertop. Here we can see the happy finished result, with a few coconut shreds sticking up at an oddly jaunty angle: 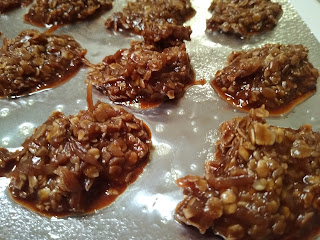 I'll be honest, I think the peanut butter is what held this recipe back. Omitting the peanut butter improved the cookies so much I am surprised the official recipe still uses it. Making the cookies peanut-free eliminated that peculiar mushiness that I never really liked. Anyway, these never had enough peanut butter to hit the right flavor, just enough to interrupt the chocolate. Without it, these are now a really nice way to bring more chocolate into your life. And if you like coconut even just a little bit, you will be very glad you added it to these too.