Today's recipe begins with something that brought high hopes and disappointment. 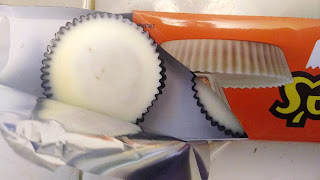 I was so excited at the idea of uniting peanut butter and white chocolate. I've never had anything that put these two together, but the combination seems both very obvious and very delicious. But these were just peanut butter in a flavorless white coating. I don't know why I've never thought to put white chocolate chips in peanut butter cookies before these things dashed my hopes, but since inspiration struck here we are: 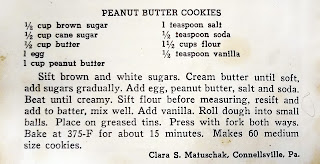 This recipe began as well as cookie recipes do when I wield the spoon. I thought to myself how nice it is that we're using a half cup of all the first ingredients, meaning I could use the same measuring cup to us halfway through the recipe. 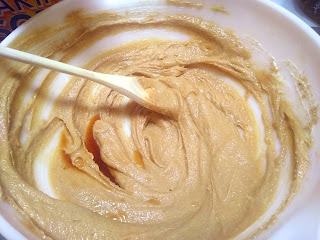 Then, as one tends to do many times in the course of baking, I looked at the recipe to see what I should do next. Then I noticed that we are not supposed to use a half-cup each of white sugar, brown sugar, butter, and peanut butter. It's a half-cup of everything until we get to the peanut butter which is a full cup. This led to a short moment when I asked myself whether I was so enchanted at using the same scoop for all the ingredients that I failed to notice this the first time. This is the tradeoff when one keeps chatting with everyone while cooking instead of shooing people away to better focus. Eventually I decided that I probably had accidentally halved the peanut butter and put more in.

I think I got the peanut butter right because the dough looked perfect. We'll never know if I owe these cookies to a mistake or not, but I'm almost sure I did exactly what Clara Matuschak intended. The dough was firm enough to shape with your hands but not stiff or crumbly. We gleefully dumped in the special ingredient. 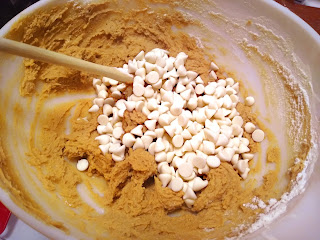 I think that I have differing ideas than Clara Matuschak about cookie size. The recipe claims to make about 60 cookies. I somehow mysteriously only got twenty. Keep in mind that this is with a generous scoop of white chocolate chips adding volume to the cookie dough, so I maybe got two dozen cookies out of this dough that purports to make sixty of them. I'm sure this has nothing to do with my choice to use the eighth-cup measure as a cookie scoop. 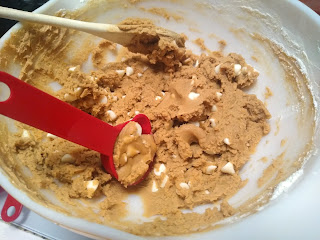 In all seriousness, I know that I am making much larger cookies than the recipe intended. But since we're getting exactly one third the cookies the recipe promised us, I think we can safely assume that the definition of "medium-sized cookie" has shifted between 1952 and today. 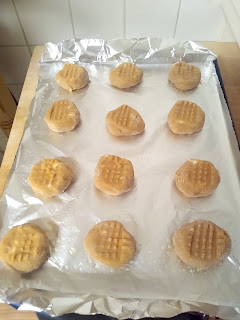 I still can't look at a cookie recipe and tell how much they would spread. Most of the peanut butter cookies I've made spread quite a bit, so I didn't want to flatten these too much before they had a chance to get hot and oozy. It turns out these cookies don't merely need a gentle denting with the fork to give them those signature gridlines that all peanut butter cookies should have. You need to squash them flat. Although the peanut butter poufs were rather cute if a bit oversized.

After smashing the second batch much harder, we got much better cookies. So if you make these cookies, you'll want to be forceful with the fork. These cookies expanded a bit while baking, but otherwise held the same shape as they had before entering the oven. However, it seems that the clubwomen of the Slovak-American Ladies' Association liked their peanut butter cookies a bit overbaked. These cookies, despite being much larger than the recipe intended, were done in about two thirds of the baking time. We have seen this before in a peanut butter cookie recipe from the same book. You may think I need to get the oven checked, but only peanut butter cookies from the Slovak-American Ladies' Association cookbook ge burnt if baked for as long as the recipe directs. 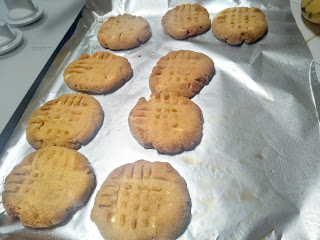 With that said, this is a dangerous recipe if you still want to fit in your clothes. White chocolate chips or not, these cookies seem hard but they're delightfully crumbly once you bite into them. They're surprisingly airy inside but still wonderfully filling. We will be revisiting this recipe.... but sparingly because we don't have elastic in our clothes. 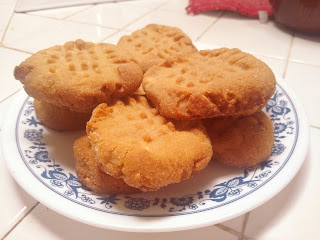