The perils of food processor cheesecake

Sometimes, one wants to branch out from banana bread. I think randomly passing by the graham crackers in the grocery store while aware that we had rapidly-expiring bananas on the countertop gave me a slight craving for banana cheesecake that festered and grew until I went out and found a recipe for it. I've never had (much less made) a banana cheesecake before. As much as I like cheesecake, it's not something I get cravings for. But just like I often want to make peanut brittle when it's frigid out (even though I don't really like it the rest of the year), apparently sometimes a cheesecake just insidiously takes over my mind until I make it.

Looks straightforward enough, doesn't it? I wanted a recipe without boxes of cake mix, cottage cheese, or any other odd things in the batter. I also avoided any cheesecake recipe that involved gelatin instead of baking.

When we were purchasing bananas last week, the normal ones were green enough we could hang them up for a festive Saint Patrick's Day mood. The organic bananas were perfectly ripe, yet exactly twice as expensive. However, towards the end of the fruit shelf lay bags of bananas on clearance, well into the "eat these now or they will expire" phase. Delighted with being able to economize on fruit, we brought them back to the house. Now I wonder if I saved any money if half of the bananas had to be hastily put into desserts because we weren't eating them fast enough.

Anyway, some people go out of their way to find single-bowl recipes. Today, we at A Book of Cookrye are making this not a one-bowl recipe but a one-appliance one: 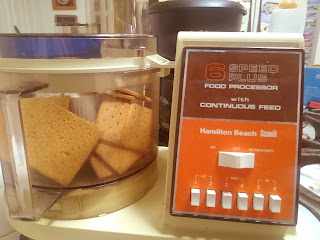 We at A Book of Cookrye are learning all about the food processor. These things just never figured into our culinary lives. We've had blenders, but I didn't encounter a food processor in person until I went to cooking school. My mother wasn't very big on filling the kitchen with sporadically-used appliances. We've used the food processor for relatively tame things like making pie crust and grinding graham crackers (the latter for what would have been my Christmas cake this year). Today, we will make the food processor whizz its way into making a complete dessert! 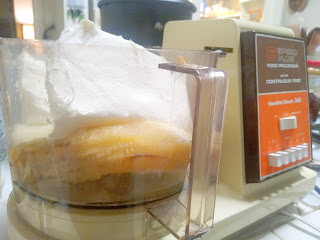 At first I was absolutely delighted to try this exciting new approach to baking.  Instead of putting ingredients into a bowl in the right order and ensuring proper mixing and incorporation, we can just dump everything in and press a button! Or so I thought. Despite the motor's best efforts, the cream cheese hovered over the whirlpool, steadfastly remaining above it all. 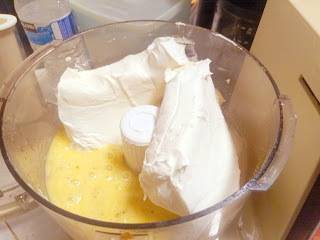 This initial failure turned out to be for the best. While I was doing some rubber-spatula reshuffling, I realized I had forgotten a certain crucial ingredient: 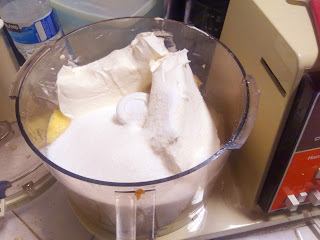 I was just too excited about using this new, modern appliance to think about minor details like whether I had added the sugar. I don't know whether I wanted cheesecake or if I just wanted the experience of food-processing one. If you recall how much happiness I got out of using a cornstick pan, you can no doubt surmise how I went right over the moon while using the same countertop device to pulverize my graham cracker crust and then make the cheesecake to pour into it. However, my excitement waned when I opened up the machine to find a sweet soup of cream cheese chunks. 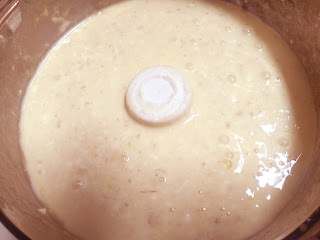 I began to suspect that perhaps I shouldn't have dumped all the ingredients into the food processor all at once. But like I said, food processors are a new device to me. I don't know anything about how to use them correctly. So instead, I let it run for long stretches of time. Then I pulsed it repeatedly in case the starting and stopping made a difference. However, no matter what I did, I still had little specks of cream cheese that absolutely refused to mix in. 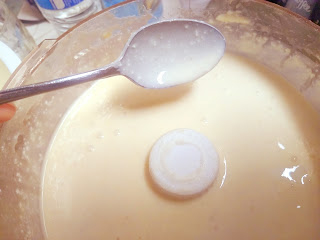 Eventually, I decided that I would have to pour all of this batter through a strainer and then put the curds into a blender. That was too much work, so I just dumped it all in a pie pan and hoped for the best.

While it was baking, I decided to test something that I had been wondering the whole time I was getting this made. We have successfully made beef fat biscuits, beef fat pie crust, and even beef fat cookies. Beef fat has proven to be a surprisingly neutral flavoring. I wanted to know what would happen if we used it instead of butter in a graham crust--- but I didn't want to risk a whole cheesecake. So I made a little bit of test graham cracker crust in a bowl instead. 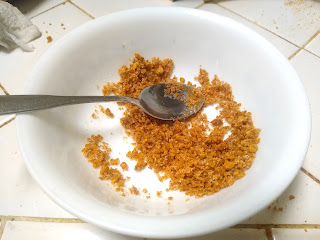 This is the first time anything has tasted beefy. You would think it would be the beef fat shortbread since it has absolutely nothing to hide any suspicious flavors. But no, the beef fat graham crust tasted ruinously meaty. But no matter, we didn't put this would-have-been cheesecake ruiner in the pie pan.

At any rate, the finished cheesecake suggested that we have a bit of oven tilt. 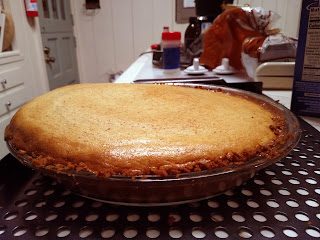 We cut into this as soon as it was cold enough, and it did not taste like a cheesecake. It was a very nice, light-textured custard pie with a hint of banana. In texture, it reminded me of the ricotta pie I made once out of an Italian cookbook.

However, after it had sat in the refrigerator for a day, it had gotten denser and tasted like the cheesecake we meant it to be. If I had to guess, I would say that the little cream cheese speckles interspersed throughout somehow dissolved and melded with the rest of the pie after a day or so. At any rate, if you mix this like a normal person instead of like a food processor enthusiast, you will no doubt be delighted with what you get. I thought I was the only one in the house who liked it until I came into the kitchen a few days later and saw someone else eating the last of it right out of the pie pan. 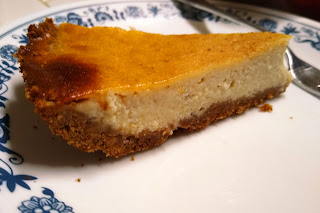