A Book of Cookrye does Kosher Chinese Food

We at A Book of Cookrye, in the desire to expand our culinary horizons, found this in the library: 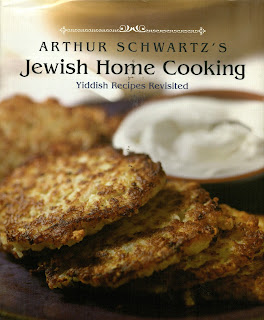 It has the same sort of thud factor and soft-focus closeup photographs that might lead one to believe the book either calls for ingredients you can only get in this one specialty store in New Jersey or has recipes that start with unrealistic instructions like grinding your own wheat flour (no, I'm not making that up). But the recipes are actually something you could make in your own house without spending six hours in the kitchen or finding the one store that sells the insanely expensive fermented mushrooms in wine that the recipe says you absolutely cannot omit. Granted, you'll need to buy matzo meal for a lot of things in the book, but that's the only specialty ingredient that comes up more than once. Heck, the sausage recipe even says that those who do not have sausage skins and stuffing equipment lying around can do them in tinfoil instead.
The recipes alternate with essays on the cultural history of Jews, Jewish food, and such. A lot of it is reminiscing about being Jewish in New York in the 1950's. Therefore, naturally, there's a section called "Why Jews Like Chinese Food." Which brings us to today's perpetration: 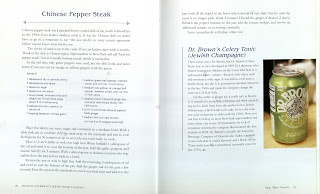 Chinese fajitas, eh? Be careful with that claim; people where I come from know how fajitas are supposed to come out!

As a brief recipe note, we do not have sherry, so we cadged a couple spoons of regular wine off of someone. Also, it just so happens we have skirt steak!

Also, given how he says that it tastes better if you have a mix of green and orange bell peppers, guess what we found in the discount produce bin!

A lot of people have written about the deep connections between Jewish people and Chinese food- there are even academic dissertations about it. Apparently the two go together like college students and pizza, which apparently no grad student has ever written about despite living it. I'm actually surprised that the latter hasn't gotten academic writeups (yes, I searched dissertation databases to check).
You'd think some grad student would have done some research piece about Italian immigrants, cultural assimilation, appropriation, and whatever else combined to bring pizza to students everywhere, whether it's people doing late nights or clubs trying to lure people in. The subject interests me the more I think about it. The usual explanations I've seen are "cheap, quick, and requires no utensils." However, a lot of other foods answer to all of those. You just don't see the actuarial science club and the Baptist students both putting up signs that say "free burritos" or "free egg rolls" to get people to show up in their meetings. It's always pizza.

Getting back to today's perpetration, we find the talk about Jewish people and Chinese food a bit odd, as Chinese food is everywhere. (We're skating right over how much of it resembles what you'll get in China.) Even places where the regional specialty is tater tot casserole have Chinese takeouts. But since we have no working knowledge of Jewish history or culture, we'll not dispute what those who know about it say.

Incidentally, for those of you trying this at home, it seems that his stove runs a lot hotter than ours does as we ended up using about triple the given cooking times. Or maybe he cut everything up a lot smaller than we did. At any rate, cooking everything over higher heat than we usually do made everything in the pan really caramelized without going completely soft. 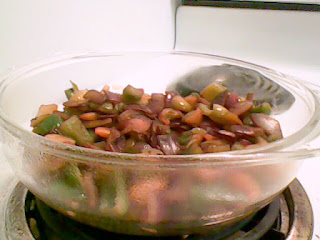 Also, rather than marinating the meat for a few hours, we left it overnight. We didn't plan to, but the night we planned to cook it, we were so tired that the thought of doing all the chopping and dishwashing made us get a sandwich and fall into bed. However, it's probably for the best.
At home, when we grill fajitas a lot in the summer, it always seemed that no matter what we did, the homemade attempts never quite equaled purchasing preseasoned meat. Eventually someone figured out that the meat in the store spends multiple days marinating in the package as it makes its way down the shipping pipeline. So if you ever want really good homemade fajitas, just bag the meat with the marinade and leave it in the refrigerator for a few days. And if you're just too tired to turn on the stove, you can tell yourself it's because you want the meat to be properly marinated and not at all because you reached for the stove knob and felt like you just couldn't. 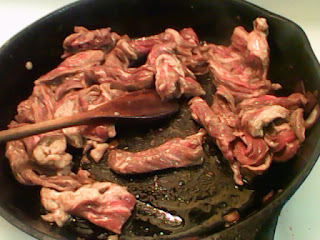 All right, we're going to give him credit for calling these Chinese fajitas. Aside from the soy sauce, the kitchen smelled exactly what they bring you on a sizzling platter in Mexican restaurants. It also was smoking just as much, prompting us to close the kitchen door lest the smoke escape into the common room, trigger the alarm, and cause a fire drill.

You know what this tastes like? Chines takeout. We will leave meditating on finding Americanized versions of Asian food in a Jewish cookbook for another time because this is so good. Also, given how long our week ended up being, it was so reassuring to know it was in the refrigerator and therefore dinner was already made.
Posted by S. S. at 10:50 PM