We at A Book of Cookrye have been contemplating a recipe that seemed really delicious but failed in execution. It's cinnamon rolls baked in the brown sugar-butter stuff you'd do a pineapple upside-down cake in. When we last tried to make them, we unfortunately burned the hell out of them because it turns out Marcus' oven runs some somewhere between fifty and a hundred degrees over what you set it to.
However, given how many spatters have landed on the original book's page in its lifetime, the recipe has got to be good if you don't turn your cinnamon rolls into charcoal, right?

If nothing else, these things are really quick to make. Seriously, we went from a bowl of partially-mixed stuff to rolling dough out onto the counter in 15 minutes. 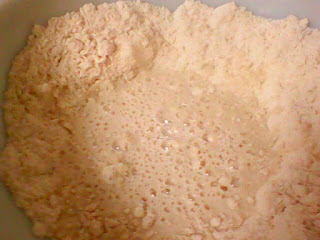 Most of the cinnamon roll recipes we've found that don't involve just buying a can of refrigerated ones use yeast. These use baking powder instead. We wondered if the dough would come out kind of bland, but then again we're covering it in craptons of brown sugar and butter.

The original recipe said to coat the dough in butter before you put the brown sugar on, but we usually skip that and just sprinkle the brown sugar on. Supposedly the butter helps the brown sugar stick either while rolling them or while baking, but ever since we forgot it in an incident that involved the phrase "too late, they're in the oven," we don't bother with it any more.
We had suspected the butter is there to melt while baking and keep the brown sugar from falling out into a powdery mess once you bit into one. The rolls came out just fine, and you couldn't taste the difference even before we slathered the icing on top. So, yeah, you can skip the butter. And if you think we're saying this in an attempt to dodge calories... uh, have you seen the recipe we're making? 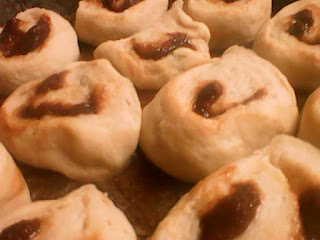 While there was a satisfyingly deep layer of brown sugar stuff in the bottom of the pan, we wondered if it would be enough once the rolls expanded in the oven. Would they have a scant layer of stuff on top or would they be gloriously butterscotch-y on the bottom? Well, we figured, even if the topping turns out disappointingly thin, we could ice them and then have this awesome glaze-under-icing thing going. However, we didn't need to worry about forgetting to buy cream cheese for the icing.
Look at how sticky and divoon they turned out! 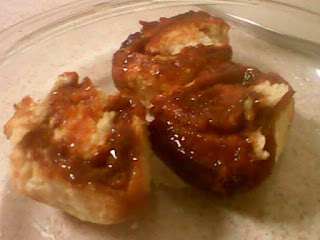 The bread part was deliciously buttery, and the recipe provides a lot of cinnamon sugar to roll up into them. I could go on about how delicious these were, but instead here's what the pan looked like 20 minutes later. 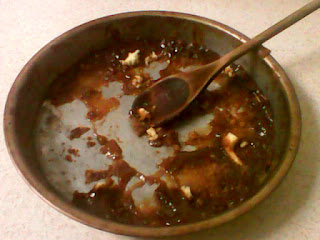