You know how some things seem so brilliant you can't believe you never tried them? We at A Book of Cookrye, in our ongoing desire to avoid having to get out a plate and fork because we'll have to wash them, decided to do this.

What the heck are those things? Well, we're cracking open a Louisiana Junior League cookbook and perpetrating this.


Looks surprisingly straightforward, doesn't it? It's like you're making a skillet supper but then inserting it into onions. We at A Book of Cookrye were drawn to this recipe because we love the idea of encasing our supper in itself. When we want to eat leftovers, we will theoretically be able to just microwave one and eat it like an onion-meat cupcake.
However, we didn't realize that hollowing out onions is a pain in the ass. The recipe makes it seem like they'll just fall apart once you cut them open and you can just pull out the inner layers. The reality involved a lot of inept knife hacking.

We later thought that rather than slicing off a lid and using the rest of the onion as a shell, we should have halved the onions and thus gotten two onion bowls from each. However, just doing these took forever, so we didn't regret that we thought of it too late. 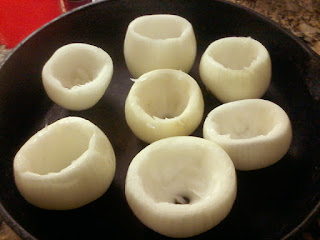 As a brief aside, despite being nearly white, they turned the boiling water surprisingly yellow. 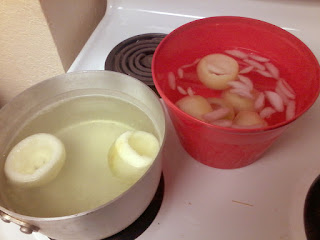 All right, we've done enough silly prep work. Now it's time for this to turn into a Southern recipe. By this we mean an ungodly amount of butter. I should have just used a little splash of oil, but for some reason I was convinced that there was some very specific reason why we're supposed to dump half a stick of butter into this.

I don't know what's worse, using that much butter or the fact that all the excess disappeared by the time the onions were cooked.

However, that's before we add a massive wad of sausage! We're using Italian sausage and you can you insert your own joke about Italian sausages because we at A Book of Cookrye are too classy to make one ourselves.

I would just like to point out two things: butter and sausage. You know how sausages ooze out fat when you cook them? According to this recipe, all that butter and sausage drippings are so precious that we're making sure they get soaked into bread so we can really savor all the goodness of fat.
This recipe makes me think of what a friend of mine said after having dinner with some relatives who live out in the country and coming home looking like her eggs had been scrambled: "I don't know how much butter went into that casserole, but I know she didn't drain it!" We did, however, soak the bread crumbs in milk instead of cream. The teensy allotment turned them into bread Play-Doh.

The breadcrumb clay refused to break up into the rest of the stuff in the pan until we dumped a lot more water in to dissolve it. We now had something unrelentingly brown which we were going to insert into onions. 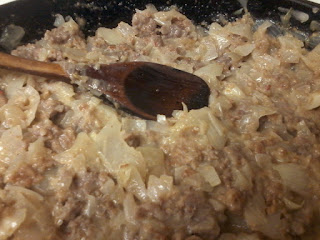 Fortunately for the color-starved, we at A Book of Cookrye previously discovered that parsley is in fact really cheap.

As stupid a thing as it is to get excited over, we at A Book of Cookrye got really excited that these things matched the little picture in the book right down to the one that kept trying to fall over. Incidentally, and perhaps due to my poor onion-hollowing abilities, only half of the stuffing went into the onions. We should have cut them in half so we'd have twice as many little shells to fill. However, the other half of the stuffing was delicious.

However, once we got to the point that we could just ditch them in the oven and come back when we were done, our excitement at being finished with all the work made like a fat-soluble vitamin and dissolved in butter.

The @^$#@%$ frequent basting felt like watering flowerpots except if you twitched your hand, you'd burn it. For the record, I think I basted them about 7 or 8 times. Does that count as "several times"?


All right, we're done with these! Wasn't that a surprising amount of work for such a short paragraph... oh wait. Reduce sauce. Is there any point in reducing them when this is all you have to begin with?

Turns out, yes there is. We now had syrup. Ever had concentrated broth and wine? It was pungent. It might be good in tiny amounts, but you wouldn't want to dump it all over things. Not that you could, anyway. There's only a spoonful or so. 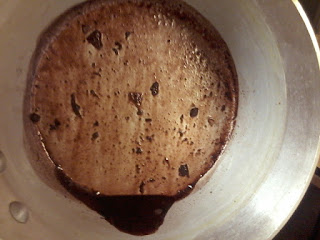 Great. Now it looks like tar puddles formed on top of the onions. 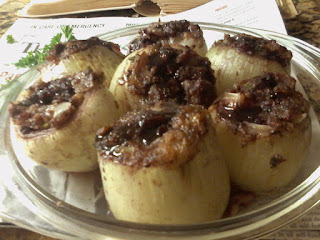 I kept going back and forth between "It's just like the picture! Ooo, it looks so retro!" and "It looks like something crawled into the onions and died." 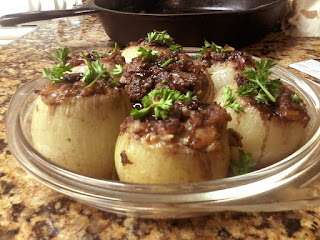 And, for the record, these things tasted amazing. Pungent wine tar on top? Divoon. Sausage-onion stuff? Heck yes. Onions soaking in butter from the inside and wine soup from the outside? You have no idea what you're missing. However, these are incredibly awkward to eat. You can't eat them like cupcakes because the inner onion layers squirt out, spilling stuffing everywhere and leaving you with a soggy onion husk in your hand.
However..... er... since this is Southern food, we're going to attempt to be gracious.
These are an ideal food for an outdoorsy picnic. They would be wonderful made ahead and wrapped in foil for a camping trip on those lovely nights when you sleep directly under the stars. They're a lovely lunch or dinner idea in the fall or spring, when the weather is just perfect and you just want to open the windows and let the beautiful breeze flow through the house.
Posted by S. S. at 8:30 PM