We at A Book of Cookrye, like many people, are no strangers to the notion of wooing by way of baked goods. And while we have never heard of people successfully drawing the attentions of the preferred sex by way of five-layer tortes and other extravagant creations (apparently they overwhelm prospective love interests), we---
You know what? Let's get to the point. Chocolate cake!


This comes to us from a recipe handout from the Betty Crocker radio show. It's the only recipe that has a note at the end telling you why you should totally make it right now; every other one just has ingredients and instructions. Apparently a lot of people in the middle of the Depression swore by this recipe's ability to snag a man. Purely out of academic interest, we would like to see if it still works today.

Now, as aforementioned, a lot of people have resorted to the stove to cure their singlehood. We at A Book of Cookrye have noticed that recipes sworn to snare the preferred sex are usually very simple. There are no reports of people falling heels over head for the one who made something like a Hungarian seven-layer hazelnut torte. However, a lot many people swear they snagged their beloved by deploying things like baked chicken, brownies, apple pie, or blueberry boy bait. You notice how none of those are particularly fancy?

Chocolate cake is one of those many things a lot of people try to bait potential beloveds with. So we're going to see if this one has any date-catching potential. And even if it doesn't, does it at least live up to the "delicious, fudge-like flavor and consistency" promised in the recipe afternote?

Now, usually when you do this alternately adding in ingredients, you start with the flour. Usually. But we at A Book of Cookrye recommend you add the milk first to make the chocolate paste stuff (which, if you didn't taste it yet, you should) a bit runnier lest this happen.

But however much it looked like it wouldn't turn into cake batter at first, we ended up with... this!

You have no idea how good this tasted. It's like chocolate heaven in a mixing bowl. I guess when there's a Depression on, no one wants to waste their budget on bad cake, so you know this is going to be good.

A lot of times you have to carefully fold in the egg white foam one spoonful at a time, but with this recipe you can just dump them all at once and it works out just fine.

Look at it! It's so creamy and dreamy, and it tasted so divoon I nearly turned off the oven and ate it all right out of the pan.

At this point, we dropped our skepticism about this having a fudge-like consistency and decided that what was called a cake was in fact a recipe for brownies. 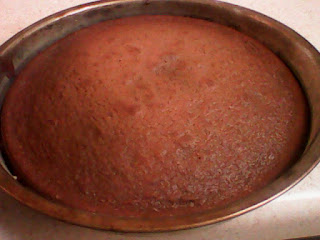 However, the cake did collapse on itself a bit, making it unfortunately look a little bit like brains.

But you know what? It doesn't matter if it looks like brains on top. This is seriously amazing. It's fudgy and dense, but it's not at all heavy. And it's so chocolatey. It may help you get a date, but you'd have to let other people eat it first. 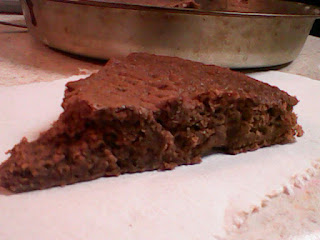