I know I really want to eat rocks

We at A Book of Cookrye would like to briefly discuss the finer points of cookbook design. While a good cookbook need not have attention-grabbing colors and pictures on every page (it would get jangly and annoying to anyone spending a while looking through the book), the book should nonetheless be easy to read. Also, while recipe names need not be particularly fancy, surely someone can come up with a better name than this.

I mean really. I know the Depression was on, but is "rocks" the best name you could come up with? Who would look at a recipe in dismal-looking type called "rocks" and want to make it? ...Besides us, of course. 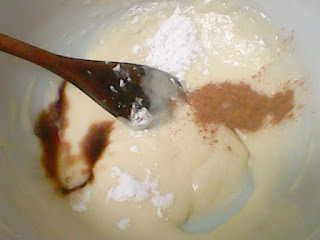 One of the interesting things about cookbooks like this is seeing what used to be cheap but isn't anymore. A lot of recipes in this book call for cut-up dates in huge amounts. Given the price of dates these days, we instead used that dreadful ingredient that sends so many people away in disgust.

The one time that dates were discounted enough for us to buy them, we found that once you chop them up and stir them into cookie dough, they taste like raisins anyway. Therefore, we these days go with the cheaper option. The Depression may be long over, but the Recession ain't.

As a recipe note, we used butter instead of shortening. A lot of recipes from this time use the word shortening when they mean the solid fat of your choice.
The first batch came out oddly coarse. We refrigerated the remaining dough, and the second batch came out a lot better. Therefore, we at A Book of Cookrye recommend the cookie dough spend long enough in the refrigerator to get thoroughly cold before baking.

I didn't think this recipe would taste particularly unusual. I mean, there are no odd things in the ingredient list. But if a recipe these days calls for cinnamon, you usually use a lot of it plus other spices like cloves and nutmeg. Also, the only cookies I've seen with raisins in them also have oatmeal. I would swear we've had cookies like these at church potlucks. They're good, but just different enough from ones made from modern recipes to make you find them a little odd.
So if you'd like something slightly unusual, have no family recipes and wish otherwise, or if your (great-)grandma was a terrible cook but you'd like to pretend otherwise and further pretend you have the recipes you liked best, do try these!
Posted by S. S. at 1:53 PM