We at A Book of Cookrye have been doing some leisurely reading, and somehow ended up learning all about the history of Girl Scout Cookies. That brings us here:

Apparently, various Girl Scout troops had been baking their way through fundraising for a while when their national magazine published this recipe in 1922. Let's taste how Girl Scout cookies first got their grip on all of us, in the barely-remembered days before they handed off oven duty to factories. 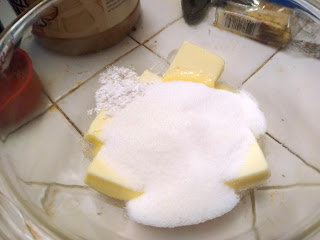 We begin, as so many good things life tend to do, with a lot of butter and sugar. We soon thereafter get to the part I always find oddly satisfying: cracking in a whole egg and then beating until it completely vanishes into the delightful proto-cookie goo. 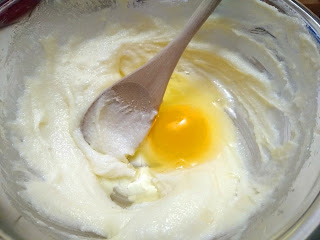 After getting all our happy ingedients in, I was more than slightly skeptical that this recipe would work. Does this look a bit runny to roll out and cut? You may as well try to use a rolling pin on cake frosting. 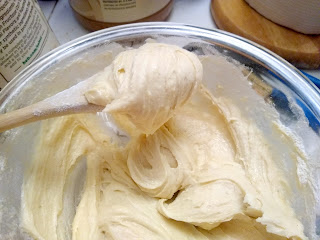 Thinking I may have mismeasured the flour, I added a bit more a little at a time until the bowl contained one and a half times as much flour as the recipe claimed it ought to. It was still really floppy and seemed hopelessly drippy. The cookie recipe over Maxine Menster's grave had seemed too squishy to roll out and cut before refrigerating, but at least her recipe was approaching slightly warmed Play-Doh before we got it cold.

I muttered to myself that I could incrementally add the entire sack of flour and accomplish nothing put a pointless waste of baking ingredients. Then I decided to turn this runny dough into cookies another way. 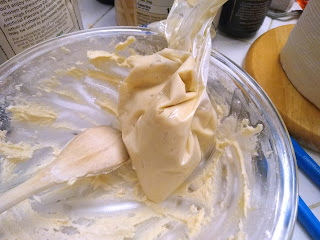 I've often written that I hate making tiny cookies because it's so tedious, but that's because I never tried piping them out before. All you do is just squirt, squirt, squirt across the cookie sheet and, and before you know it you have cookies! (If you're trying this at home, hold the business end of the bag just high enough to not touch the pan and the dough will spread out as you squeeze instead of making a mound.) 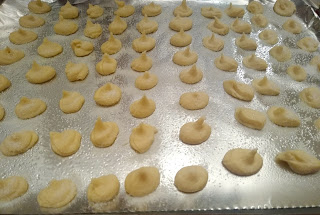 I didn't think much of how pointy all these little plops on the pan were because this dough was so runny. Surely they would all flatten out during baking. 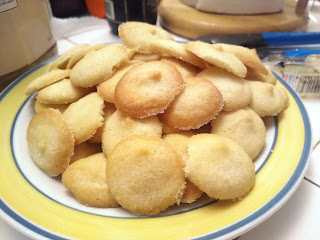 Yeah, these came out of the oven hot but also looking rather chilly. I'm sorry, but I'm not the only person who noticed a distinct appearance to these. Or, as others in the house less delicately put it, "Are you going to make the titty cookies again?" 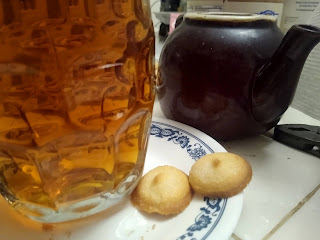 With that said, these cookies are as addictive as the Girl Scout cookies you can buy today. I think a lot of it's how small they are-- you just can't stop eating these things! We polished off most of the first batch before the second one had baked and cooled. They have a wonderfully rich flavor and they're crispy without being hard.

I'm a little irked about the flour measurement, though. I later made another batch exactly as written, rather than using 1.5 times the flour as I did here. They melted into one big dough puddle on the pan. Either the recipe was miswritten or someone mis-transcribed it. But if you use one and a half times as much flour as the recipe thinks you should, you will be delighted with what you get. Just pipe them out into dainty little squirts on the cookie sheet, being sure to give them plenty of room to spread.