Today, we present a recipe that comes to us from one of our readers! Freezy wished to send in something better than the banana-egg "pancakes." And so, straight from the handwritten flyleaf of a reader's mother-in-law's copy of The Joy of Cooking, we are making this! 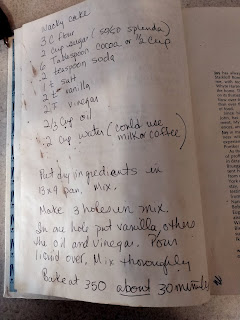 When I worked a desk job, I would often read a website called Food Timeline because they lovingly record the history of the foods most us think are too ordinary to bother documenting. It's pretty easy to find people gushingly retelling the history of high-end and high-priced dishes like crepes Suzette, but how many places have the history of the foods that are practically the background noise of everyday life-- like grilled cheese, potato salad or trail mix? Anyway, Wacky Cake gets its own entry, but this is the first time such a recipe has landed right on my digital doorstep. 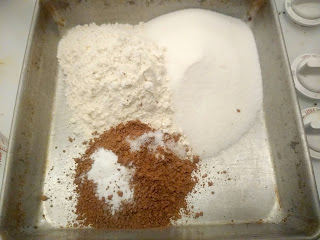 This is the second time I've gotten a recipe you're supposed to mix in the pan, and both recipes involve chocolate. The first one is for brownies, and if you like your brownies more like sweet chocolate toffee than dark fudge it's a good one.

I was going to use water, but I decided coffee would be a lovely addition. And so, after pouring the coffee into a shallow bowl, we had to wait for it to actually cool off. This coincided with others in the house wanting to visit the new gas station for obscenely large fountain drinks and other assorted delights, which is one of the few sources of entertainment around here that does not close at 9PM.

If you think I'm exaggerating, you should see the crowds at this new 24-hour gas station after the clock has struck eleven. Everyone who has nowhere else to go for fun at night, (ourselves included) goes there since they opened last month. The people working the hot sandwich counter don't have to check how long food has been under heat lamps.

Anyway, when we got back, the coffee had cooled. 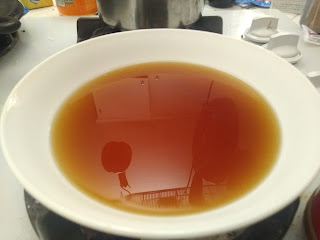 We had to make two substitutions today. First, the only vinegar in the house is cider vinegar. But since we're only using a spoon of it, I didn't think we'd imbue the cake with apple flavor. Second, we lacked one ingredient for tonight's recipe: cooking oil.

We have no plain cooking oil in the house at present. So even though we're deviating from the recipe a bit, we decided to melt some of the spreadable margarine that usually goes on toast and grilled cheese. In a bizarre turn of grocery store markdowns, they had gallon jugs of olive oil at 75% off a few weeks ago. Therefore, after we used up the last of the plain oil, we just didn't bother replacing it.  After the margarine had its brief turn on the microwave turntable, it was one of the prettiest shades of yellow that modern artifice can produce. 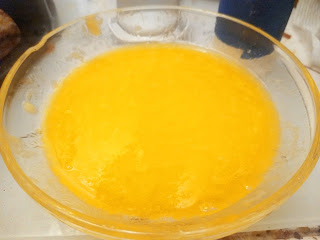 I was pretty sure this recipe would be a good one because it was handwritten in a cookbook. That is commitment to keeping a recipe. You may write recipes out on scrap paper if you've been meaning to try them, but you have to really want to keep a recipe before you put it permanently in a book. 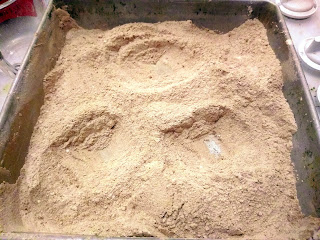 As I got out the ingredients for this recipe, I noticed that (unless you use milk or butter) this is a vegan cake recipe. At first I thought I didn't see the eggs in the page, but if I forgot them it's because Freezy's mother-in-law forgot to write them down. 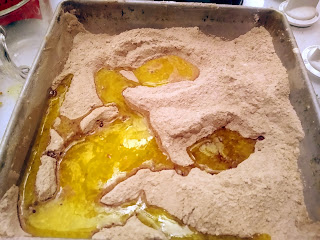 I'm not sure why we're supposed to make separate holes for each of our three principal liquids, but all the recipes I saw on Food Timeline also direct you to do that. Those of you following along at home should be sure to make an extra-wide hole for your oil (or melted margarine or whatever you're using) if you don't want it to spill over into the other two. However, the oleo flood didn't seem to adversely affect anything. 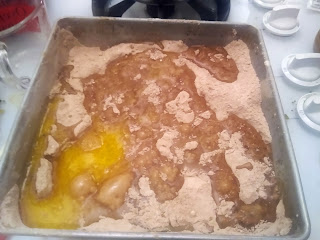 Upon first pouring the coffee, I thought the recipe didn't use enough to turn this pan of powder into cake batter. After all, it kind of looks like we've barely dampened the flour where the coffee landed. However, upon mixing we had the runny cake batter the recipe says we should have. Those of you trying this recipe for yourselves should know that you will have little pockets of unmixed powder in the pan corners. You will also likely find yourself trying to chase down little lumps unless you get out a whisk. 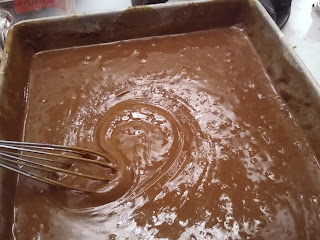 This cake came out a lot darker than I thought it would. I don't know if there's a lot more chocolate in here than I thought or if the coffee darkened everything a bit. However, our wacky cake is somewhere between brown and black. You'd almost think I burned it, but I promise you I didn't. 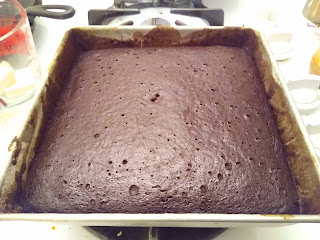 The top of this cake was extremely porous (and perhaps a bit lunar-looking) which meant that the icing I poured on it soaked right in. I could barely get the entire cake covered before all the icing got absorbed.

When we cut the cake, I noticed that the middle of it had gotten a little red. People writing about red velvet cake will often note that the earliest ones used chocolate and vinegar to get the red color. Sure enough, this cake had a definite reddish tinge to it when cut. It was also so dark we had to get out a flashlight to make it stop looking like a black blob in pictures. 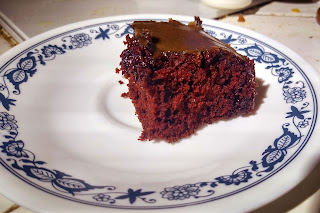 Also, this cake is a lot better than a recipe that appears to rely on a mixing gimmick has any right to be. It's so moist and delicate that it feels like it should barely be able to hold itself together. Someone else in the house described it as "velvety." And of course, that favorite word of cookbook writers, "moist," was deployed.

Because I wanted to really see what kind of cake we got, I made sure to taste it without any icing on top. It tastes like a very old-fashioned chocolate cake, or perhaps like a less-heavy red velvet. The chocolate flavor is a bit milder than a chocolate cake from today. It reminds me a lot of long-ago birthday parties with decorations that by now would qualify as retro. We agreed that we should keep this recipe. As further proof, this is how much cake got eaten after it had barely cooled enough to cut. 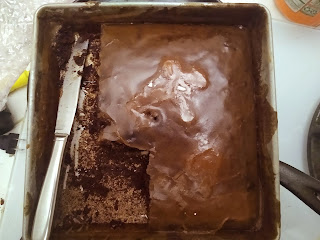 The only thing I didn't like about the recipe is that you'll have to soak the pan overnight before washing it. With that said, this cake got eaten very quickly instead of sitting around until someone discreetly discarded it. I had wondered if it's one of those cakes that just seems to perfectly lift itself off of the pan with perfect neatness (some of them do that), but it isn't. If you want an easier-to-clean pan, or if you want to bake this in layers and stack them, you might want to mix this in a bowl and pour into a well-greased pan instead of mixing it in the baking vessel. 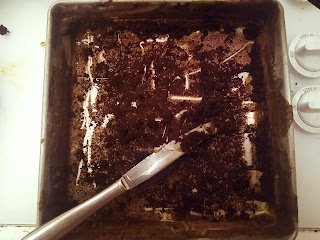 You can see what the cake leaves behind in the above photo. But since leaving a pan full of water overnight doesn't exactly demand effort, I don't mind. This cake will be gracing our countertop again.