Beef Fat Pie Crust: or, Can we eat dinner for dessert? 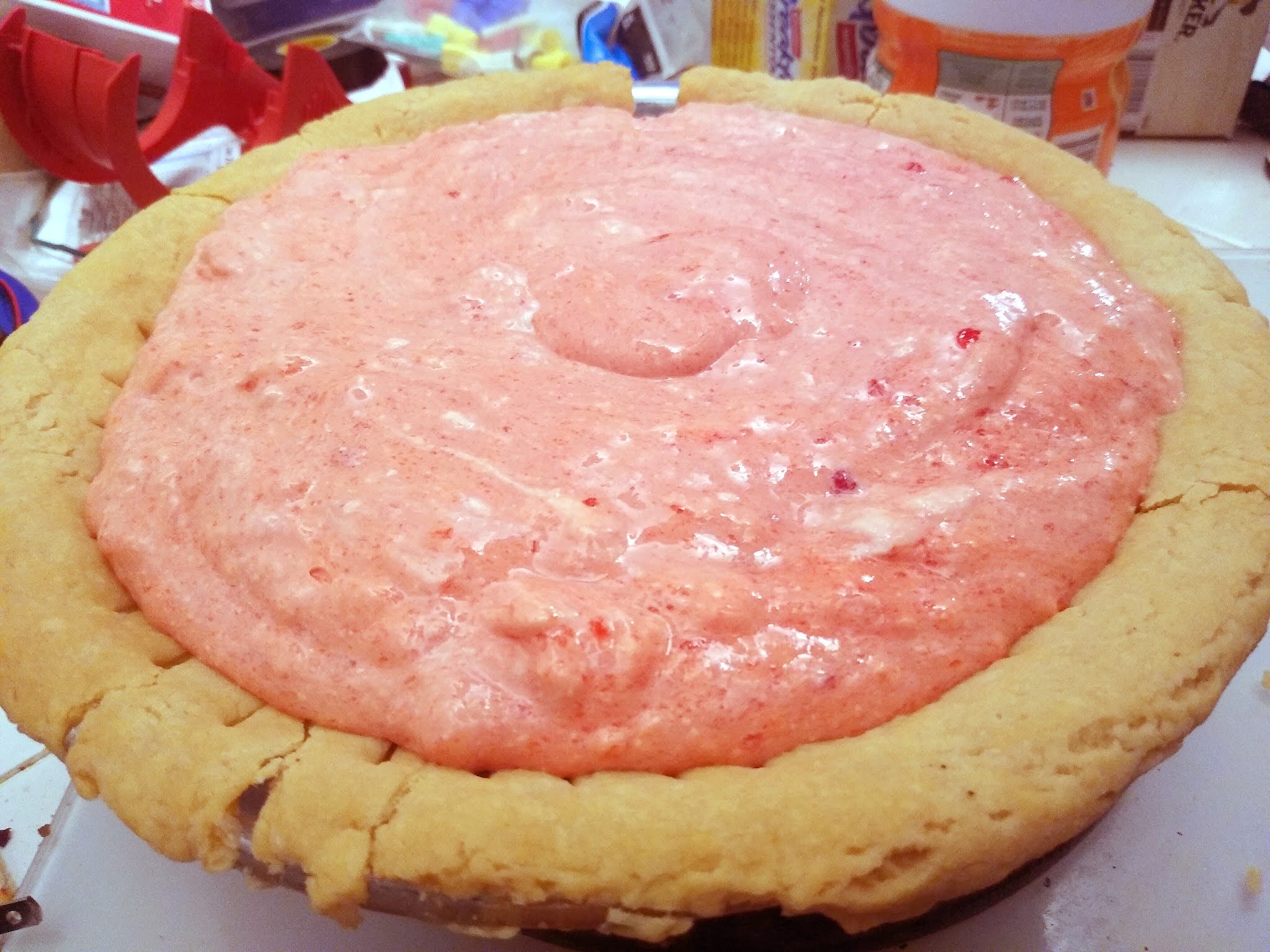 As aforementioned, we at A Book of Cookrye have a lot of beef fat pass through the refrigerator and then to the trash can. Since the extra-lean beef got too expensive, we have taken to draining the fat off of the more affordable not-so-lean beef, putting it in a cup, and refrigerating it until we can drop the hardened puck of fat into the trash. This steady output of food waste has irked us so much that we not-so-secretly swapped the beef fat for the shortening in our new favorite biscuit recipe with delicious results. The success in breadcraft and bounty of meat also led to unwarranted kitchen crafts, culminating in beef-stuffed beef bread. 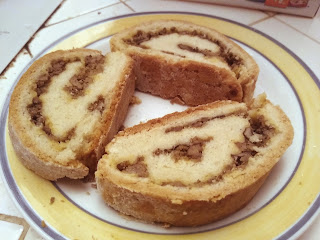 You really can't taste the beefy difference in biscuits, but perhaps we are more apt to dismiss a suspiciously meaty flavor in something that's meant to go with a savory dinner.  We wondered: can one put beef fat into dessert? As an experimental substitution, we decided to make pie because I like making pie crusts. Besides, since the beef and pie filling would remain in separate layers it would be easier to tell if something was fishy-- or beefy-- with a pie that tasted like dessert on top of steak.

We could have first made quiche or something similarly savory, but we wanted to see just how far we can take this bovine substitution. Since I can't ask any of my great-grandmothers about this (though in photos they look like the sort of people who would know), we're going to have to discover for ourselves whether we can economize on butter with this beige-colored byproduct of spaghetti night. 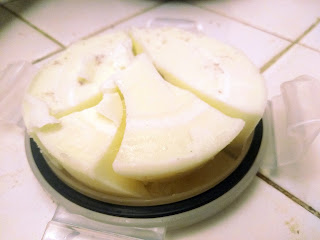 In our earlier posts about the wonders of baking with beef, we noted that the fat was so hardened from refrigeration that we couldn't really mix it. In the comments, Lace Maker reminded us that electric refrigerators used to be quite the extravagance, and therefore I should have at least let this sit out and soften a bit first. You might think I remembered to soften the beef fat after reading that, but I forgot and therefore had to bring in the power tools. 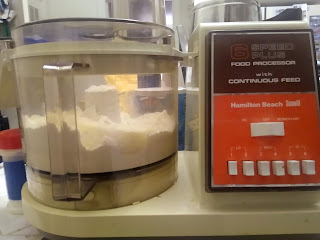 I have never made pie crust in a food processor before. It's a common technique, but this is new territory for me. Also, I think this particular food processor must be missing a lid. The only lid I have found has a downspout on the side that I had to tape shut to prevent it from spraying flour all over the floor. 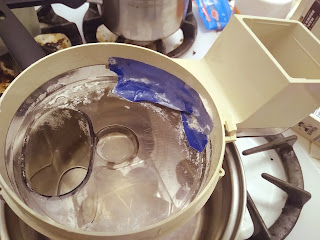 Having used masking tape to force the food processor's lid to do the very basic job of keeping food inside the machine, we turned these hardened fat fragments and flour into a perfect sand in about twenty seconds. 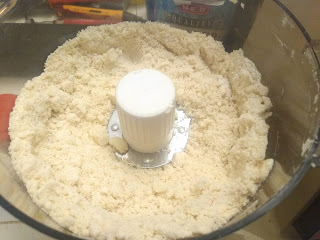 I wasn't sure how to add water to the pie crust when using this exciting new electrical method. How does one know one has added enough? I kept dribbling in tiny drops and opening up the container after mixing them in to check. I shouldn't have bothered, because eventually (and rather suddenly) the beige sand suddenly coalesced into a big ball. You can see parallel notches where the blades kicked it around a bit before I realized I should turn off the motor. 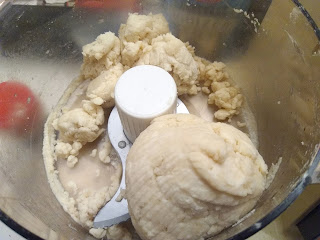 I like doing pie crusts completely by hand because it's just oddly satisfying to me, but it's nice to know that if I want to I can have one completely mixed up in two minutes after getting the ingredients ready. However, I would never consider using a food processor without a dishwasher to put the pieces in. Anyway, I know I should have refrigerated this dough before rolling it out, but it was already so pliable in my hands that I decided to proceed. This was ill-advised, but not for the reasons you likely think. There were a few times when the dough tried to tear, but it turned into a competent sheet nonetheless. 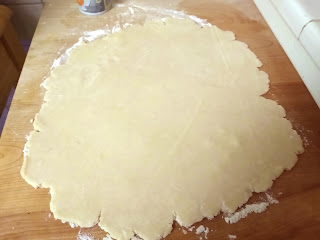 You might think that failing to let the dough rest in the refrigerator after mixing meant that it was too brittle to drape into the pie pan, but actually it handled very well. The only rip I needed to repair was right on the edge of the pie-to-be anyway. 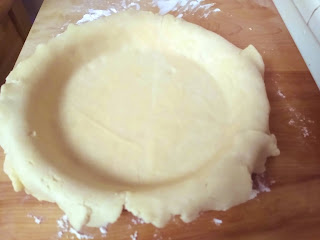 In no time at all, I had this thing all pricked and ready to bake. A lot of people use a fork for this, but I have found that the resulting pinholes seem to close up as the crust melts a bit in the oven. 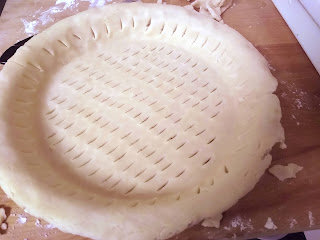 As we get this pie crust into the oven, keep the following in mind: The dough got slapped around hard in the food processor, and it didn't get to rest afterward. I really should have just put it in the refrigerator and watched videos to pass time while waiting for 30 minutes. Delia Smith, from whom we learned to make pie crusts, would have let the dough rest. Things seemed successful after baking... at first. True, there's a single fissure on the side, but that's just homemade charm. 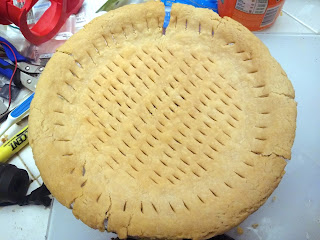 However, this pie crust looked a bit... shallow.  It turns out that by not resting the pie crust, its precious gluten strands didn't get to relax. But since I'd done such a dang good job anchoring the edges around the pan rim, the dough couldn't shrink into the pan. Instead, it shrank so much it raised itself off the pan. If you shine a flashlight through the pie pan, you can see how it the crust tightened itself like a gluten-based drum skin. Have a look at the airspace that should not be below this empty pie. I'm impressed that the dough stayed in one piece.

I'd taken the crust scraps and rolled it into a little mini-pie just so I could try a piece of the crust without breaking into today's featured dish. 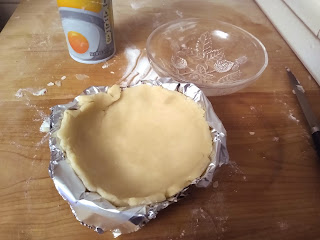 It also shrank a bit in the oven. If we'd had instant pudding, I'd have put some in. But today we didn't. 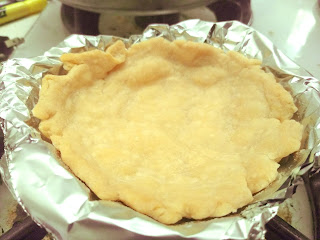 However, look at how flaky it got when you broke into it! 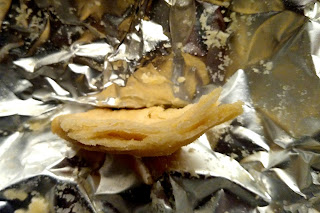 All right, let's get back to today's featured experiment. I didn't want to waste expensive ingredients on a pie that might taste like custard on top of steak, so I went with something easy and cheap. I'm referring to that classic mixture of strawberry Jello and Cool Whip. If I had also mixed in canned pineapple and put it on a lettuce leaf instead of a pie, this could have been what our Pieathlon friend Poppy Crocker has so often told us technically qualifies as a salad.

I had intended to say that the filling wasn't really noteworthy. I was going to say there's no surprises when putting together Cool Whip and Jello. I intended to finish discussing the filling by saying that my pink fluff is interspersed with Jell-o clumps and therefore lacks that homogeneity that would have allowed me to bring it to a church supper without losing my dignity. That was before I cut the pie.

First, let's have a look at a slice. You will notice that the beefy pie crust, which is the entire reason for this experimental undertaking, is delightfully flaky and full of crisp layers. You may also notice that the filling is so hard that the knife left serration marks. 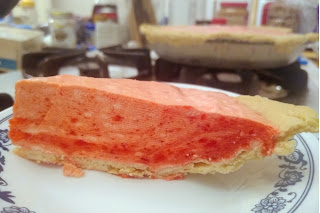 Before we go any further, I want to answer the question that launched this whole experience. Yes, you can use beef fat in a dessert pie crust. It doesn't taste like meat at all. It's not quite as good as butter, but it's a lot better than shortening. The crust has lots of wonderful crisp flaky layers.

If you drain the fat off a frying pan of ground beef, I highly suggest saving it for recipe use. The pie crust did not clash in flavor with the pink dessert on top. You could serve it to people without telling them (unless they're vegetarian or suchlike). The pie crust is that good.

However, I do not think I will make this filling again. I wanted something cheap and easy in case the pie crust turned out to be a failure, and that's what I got. The gelatinous pink foam didn't taste great but it wasn't bad either. However, it was a lot harder than a fluffy pie should be. If you slap a pie with a spatula, you should leave a dent.

I know I've often said how I don't like pies that you can't cut, and how I think that if you have to scoop your pie with a spoon you should just serve it as a cobbler or in a pudding bowl. But this pie has gone too far the other way. You could seal the edges of your bathtub with it. You could use this pie to pack delicate items for shipping. I will be finding a different cheap-and-effortless pie filling for any future pie crust experiments.

However, as someone else in the house said upon trying this: "It's a damn good crust. Not a good pie."