Slipping Whole Wheat Where it Should Never Be

White flour is still a bit of a scarcity around here. But it seems that few of everyone who is just now getting into baking (note if this includes you: Welcome! Watch out for people who start throwing recipes at you and asking you to make them for parties!) has dared to try using brown flour. The shelves where white flour should be are as barren as the toilet paper aisle a few months ago, but brown flour remains as plentiful as ever.

We've been trying to stretch that bag of powdered white gold by means of slipping brown flour into recipes. It's true that doing this to desserts can lead to the sort of letdowns that make one think of those health-food stores that tried to convince you that carob was as good as candy. With that said, I've been putting whole-wheat flour into brownies ever since Maida Heatter recommended it in her Book of Great Chocolate Desserts. As she wrote in that cookbook (which is good enough that I had a friend make a custom cover for it out of duct tape that says THE HOLY BIBLE), the whole-wheat flour adds a bit of "oomph" (her word choice) to them.

Anyway, today's recipe is one of the many that started out getting commercially published and has become almost a tradition. Our Mom of Cookrye has been making these since we were wee tots, long after the cookbook fell apart into spattered paper fragments. Naturally, instead of making the recipe as written, we are changing ingredients that shouldn't be changed.

Before you think this means that we at A Book of Cookrye have decided to healthify desserts, you should know that today's adventure starts out by economically replacing part of the butter with a big scoop of white glop from the massive can of shortening that is only in the kitchen because Hillary Clinton made me buy it. 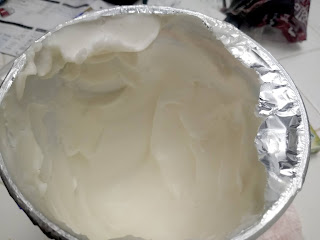 I could have started this recipe from the beginning twice. But since we add the only test ingredient last, I decided to take the easier road, make one big batch of pre-flour batter, and divide it in half at the critical moment. I later realized that this made it a bit difficult to perfectly halve this well-beaten mixture of butter, sugar, and eggs.

If I had a kitchen scale, I could have made a perfect and exact division of all the ingredients after I had them nicely mixed. Since I don't, let's move on to our waiting flours! 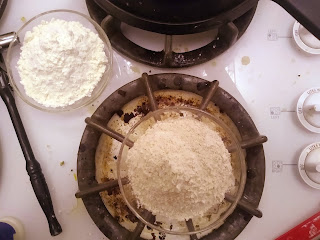 I have to pause here and thank the pizza purveyor for giving us a big stack of the tiny pans they bake garlic knots in when dispatching them for deliveries. While waiting for our pies, I mentioned offhand that the pans were the perfect size for small-batch baking. The cashier lifted a stack of them, handed them to us, and said that she uses them a lot at home too, both for cooking and for feeding her cats. 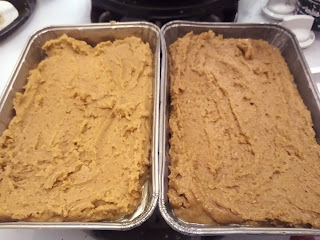 As aforementioned, I don't think I divided the ready-for-flour mixture perfectly in half. We have the same amount of batter in both pans, but that's because I scraped one bowl as thoroughly as possible but left a fair amount behind in the other.

That would automatically invalidate the results of this little experiment if I was trying to find out how a brown-for-white flour swap changed an otherwise unaltered recipe. After all, one has a lot more butter, flour, eggs, and sugar than the other. However, I just wanted to find out whether blondies are any good if you make them with brown flour, something we will still find out regardless of uneven halving. Besides, even if one kitchen mistake totally ruined anything we might have learned today, we'd still have blondies coming out of the oven in 25 minutes or less. 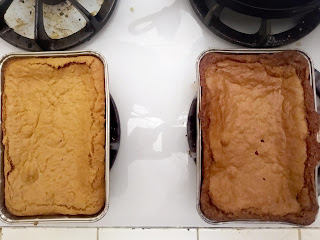 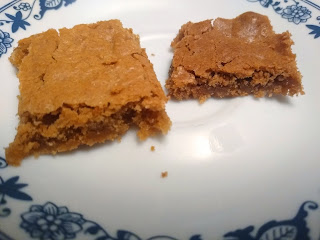