Chicken-Artichoke Soup: or, It's not a casserole if you can pour it

I had to make this because it's written on a giant chicken. 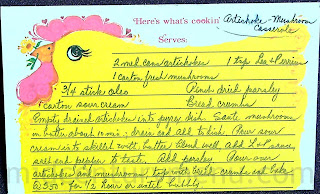 First, we needed to retype the recipe. Some people can cook with the recipe on a laptop in the kitchen, but I have an unfortunate history of irreparable damage caused by splashed gravy. Oddly enough, we do not have a working printer in the house (though we have three dead ones that just sort of stayed parked where they printed their last) but we have multiple typewriters.

The recipe starts with cooking the mushrooms in enough butter (sorry, oleo) to make a batch of cookies. But rather than make something with a thoroughly unnecessary amount of grease, I used a much smaller splash of cooking oil instead. You will also notice that I am forgoing all this business of separately cooking everything and then adding it to the pan. Just because we have a machine to remove the drudgery of handwashing dishes does not mean I want a mountain of them piling up in the sink. Also, the skillet is the least-used of all the pots and frying pans. It's also a really nice one, and this seemed like as good a time as any to actually get it out of its usual perch and use it. 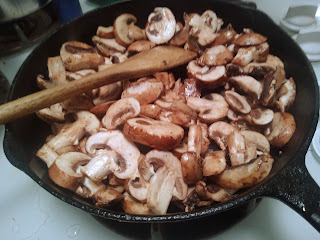 At this point we made a short revision to the recipe: adding chicken to (hopefully) turn it into a one-pan dinner. 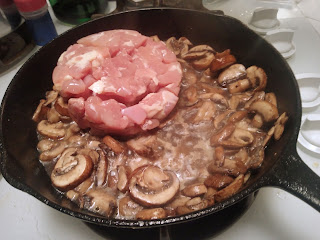 That was quick enough! And since we didn't use gobs and gobs of butter, we don't have to drain away all the flavorful mushroom juices in the pan. Ever since Fanny Cradock taught me that I actually like mushrooms when they're not boiled until quite dead, I think less of any recipe that would have me cook the mushrooms and then drain them.

But to the ruin our merrily undrained pan, resplendent in its mushroom juices, we added a mistake. Unfortunately, one person in this house really likes marinated artichokes, so I got those instead of the artichoke-flavored artichokes. They would end up tasting like leafy balls of concentrated salad dressing. 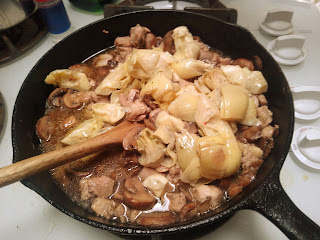 Blissfully unaware that I had ruined dinner (or at least made it a lot harder to voluntarily go back for seconds), I blithely proceeded with the recipe, adding an entire carton of sour cream as is written on the card. 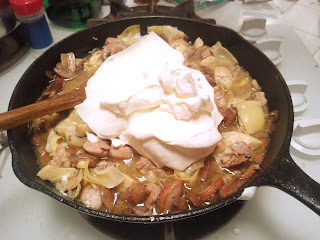 After turning what had looked like a lovely pan of chicken and mushrooms into an extra-large batch of not-quite-white glop, I realized I forgot to add that last ingredient: parsley! The parsley is a sign that this is a gourmet recipe.

I think parsley is very underused in cooking. A lot of people seem to think parsley only exists as a garnish for Italian(ish) food, and that you're not supposed to eat it even though it's right next to your lasagna. They don't know that parsley is actually a lovely and flavorful seasoning. Hence, we are adding it to the casserole, in perhaps a more generous amount than the recipe writer intended. 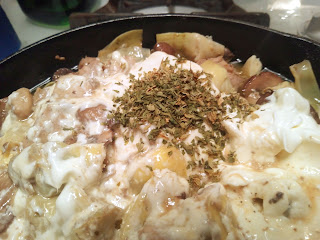 At this point, we were ready to top the casserole with breadcrumbs and bake it! Most people would have breadcrumbs on hand since they are one of the cheaper items on the baking aisle. But I forgot to get any. So, to attempt to make do with what's on hand, I put the heels of the house's ever-present sandwich bread on the bare oven racks to (hopefully) dry out enough to crumble while the oven heated up.

I really should have put a few more bread slices in the oven than just the heels. It took a lot of careful scattering, but I got this sad ration of crumbs to actually cover the entire casserole. I shook some Parmesan over everything to make the top of this casserole less... halfhearted-looking. 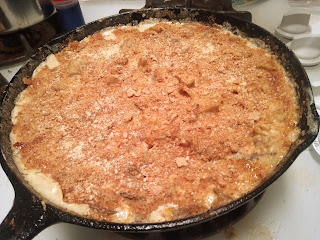 We baked the casserole until bubbly, as people fondly love to say, and it came out completely unchanged (though it was nicely warmed through). As you can see, when you spooned out some of this, it looked the same as before it went into the oven. 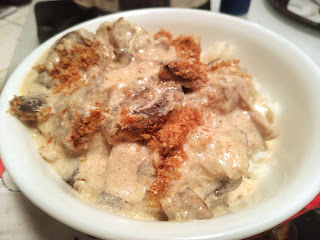 Aside from my ill-advised choice of marinated artichokes, this tasted like something that someone would fondly remember Mom making when they were growing up, starting their reminiscing with "it wasn't fancy, but it was good!" And it would have been very good in a comforting way had I just used the plain canned artichokes the recipe calls for. But no, I thought I should fancy it up with marinated artichokes, which made it taste like Italian salad dressing. Sometimes you should just stick to the recipe and not assume you know better than someone who made it enough times to justify writing it down.

But with that said, no one really objected to making this recipe again. The next time, we decided to round the recipe out by adding some potatoes to it. Because I didn't want to wait a long time for the potatoes to cook in the soup pot, I just put them in the microwave first. We also (and this is important) did not use marinated artichokes. We used the plain canned artichokes instead. They taste like artichokes instead of salad dressing. Marinated artichokes are a nice (if somewhat spendy) addition to a lot of foods, but they're just not right for this. 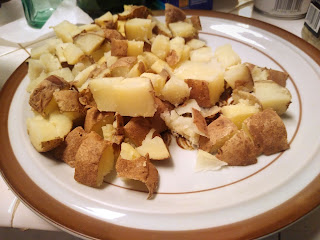 We then learned that we should have done this in the soup pot. The skillet was not prepared to contain this much chicken-artichoke-spud soup. 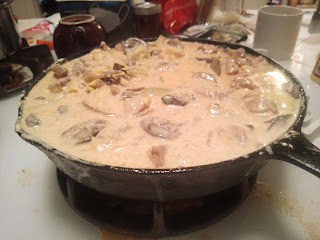 When we served it out, it looked just like the last time despite never seeing the inside of the oven. I guess baking this will warm up the kitchen if it's cold out, but it does nothing else. The only difference between the stovetop-only version of this recipe and the baked casserole is the presence or absence of breadcrumbs. If we happen to have stale bread I might turn it into croutons for this- they'd go well with the soup. 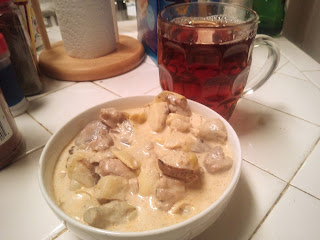 By request of others, I have already committed this recipe to a typewritten card. It's quick, easy, and really good. It's simple, and it's not an experience of gourmet ecstasy, but it hits the spot.
Posted by S. S. at 1:11 PM