Radish Relish: or, Raw vegetables in 30 seconds or less

As soon as I dumped these onto a plate, someone said "Ooo, dirt apples!" 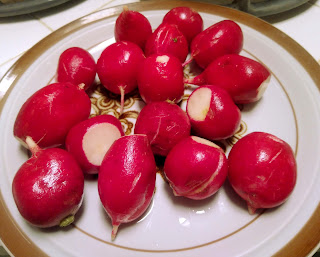 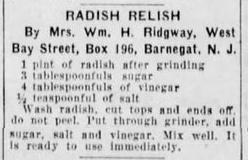 I had to find out if "radish relish" is as fun to make as it is to say. This recipe comes to us from Mrs. William H Ridgeway of Barnegat, New Jersey. During our thrilling weekend of binge-clipping recipes while Newspapers.com was free, I was a little annoyed that most of the ones I found were from syndicated columns. Sure, test kitchens put out some lovely things that make their way onto many tables, but what if I want actual recipes from nonprofessional people's houses?

It turns out the Philadelphia Inquirer has all the amateur-derived recipes I could want! The newspaper had a weekly recipe exchange, and printed two full pages (minus the ads) of recipes every week. You want recipes from ordinary people? The Philadelphia Inquirer will give you so many you choke on them! If your submission was good enough to get printed in the weekly Recipe Exchange, you got a $2.00 basket of groceries. That's about $50 of groceries in the Year of Our Pandemic 2022.

Radish relish looked like a nice introduction to making your own pickles because you don't actually do any home pickling. You simply grind and mix ingredients. I should note that we at A Book of Cookrye rarely eat radishes. I would say that we're like most people in that respect, but radishes wouldn't have so much shelf space in the supermarket if no one eats them.

As much as I like shoving things through the meat grinder, I unfortunately do not have it in my possession. But I do have access to its motorized equivalent: 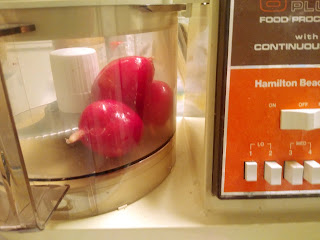 I was ready to say that I had reduced the radishes to confetti in less than a minute, but a lot of large chunks revealed themselves among the magenta radish granules. 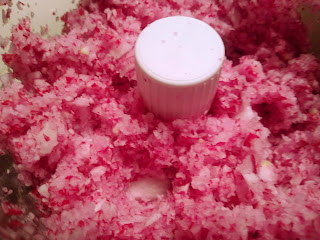 I should have just let the big radish bits be. By the time they were pulverized, everything else was almost a paste. 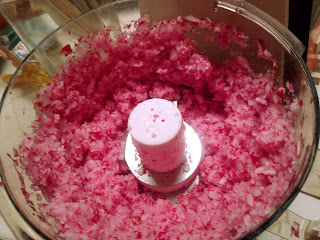 We finished the rest of this recipe finished in thirty seconds. One merely stirs in the vinegar, and--- Did you know that radishes change color on contact with vinegar? You can see the radishes at the bottom of the jar changing color while the vinegar puddles around them. 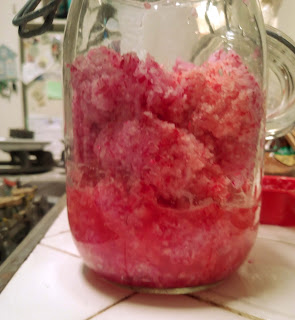 Is it hard to see in that picture? Well, here are a spoonful scraped off the sides of the food processor and one that had gotten acidulated when I dumped in the vinegar. 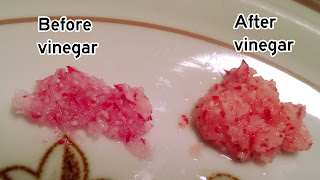 But enough about the chemistry of radishes, because Mrs. William Ridgway now directs us to add a small amount of sugar. I didn't think three tablespoons was a lot until I saw it mounded on top of the radishes.

Our finished radish relish tasted like bread-and-butter pickles, but with the flavor of radishes instead of cucumbers. I did think it was a bit bland, though. Radish relish will lubricate your sandwich, but it won't add a lot of flavor to it. I'm surprised we didn't have some dill in this-- or any other spices.

But let's get to the real problem of this recipe--- it makes a lot of radish relish. Two cups may not be a lot of chocolate chips, but it is an unbelievable amount of pulverized radishes. (You will notice that I cut the recipe in half when I typed it out.) Unless you have a lot of radish lovers in your house, you will find yourself trying to shove radish relish into every ill-advised food you can spoon it into before it expires. You will decide that peanut butter and pickle sandwiches were good enough that peanut butter and radish relish sounds like a good lateral substitution (don't do this). You will dump radish relish on every plate of hot vegetables in the hope that it will substitute for other seasonings.

I really wanted to like radish relish. It has a stunning magenta color you almost never get without artificial coloring. It's easy to make. Even at pandemic prices, it's very cheap. I've been trying to eat more vegetables, and radish relish seemed like a nice low-effort way to add variety to them. Plus, since you don't cook the radish relish, all those precious water-soluble vitamins don't dissipate in steam.

But, this relish does not have enough vinegar to preserve it. We opened the jar about a week after making it, and thirty seconds later someone across the house shouted "What's that smell?"

Short shelf life aside, I think the real fault lies not with the recipe, but with the radishes we tried to relish. I've gotten radishes from farmer's markets that were almost spicy enough to burn- like biting into fresh ginger. I think that pepperiness would have made this radish relish perfect. I don't think Mrs. Ridgway left out the seasonings to keep the radish relish politely bland. I think it was because the radishes one would purchase in 1935 would be flavorful enough on their own. The watery modern radishes we naively bought for relish-making were just too bland to live up to the recipe's intentions.

With all that said, I tried a big smear of it on a ham sandwich. It does add a bit of extra flavor, but it tasted less like pickle relish and more like sweet hummus-- which is better than I expected after eating a spoonful of the radish relish on its own. 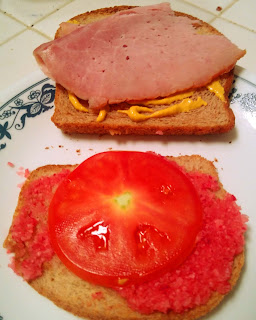 I wish the radish relish was as flavorful as it was pretty. It even made the jar look like shower gel when I emptied and rinsed it. We will be revisiting this recipe if we get properly peppery radishes.
Posted by S. S. at 11:07 PM