Spinach Ramekins: or, Making vegetables delicious without a pound of cheese

Everyone I told about this recipe had the same question: "What is a ramekin?"

I kind of love how presumptuous Laura A. Kirkman, author of the syndicated column "Efficient Housekeeping" and giver of today's recipe, is. She has not only decided (without asking) that I, the modern housewife of 1925, devotedly follow her menus ("Sorry, my dearest husband, 'Efficient Housekeeping' didn't schedule your favorite dinner until next week!"), but she has also planned my leftovers! How am I supposed to make today's luncheon if my husband ate all the leftover spinach last night, Laura Kirkman? And what if my loving family polished off the entire spinach tureen (you just know it was served in a tureen) when I served it for supper, ruining the ramekin-based plans for today?

We may not be following the "Efficient Housekeeping" schedule in this house, but we did purchase frozen spinach. We also have a lone custard cup that now lives with the bowls after all its siblings presumably cracked and went on to the municipal hereafter.

Even in this tiny thing (the smallest oven-safe object I could find without gambling on whether a porcelain teacup will survive the oven), one tablespoon is not a lot of spinach.  I'm going to assume that Laura Kirkman means "one tablespoon ish but use your best judgement," not a home-economics class style perfectly level measurement using proper measuring equipment. We ended up using about 1½ tablespoons, or "one heaping tablespoon" as one might prefer to say. 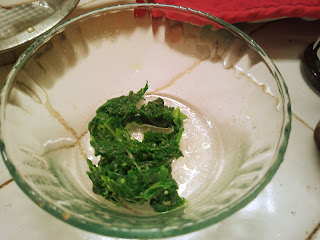 In an attempt to put the "efficient" in "Efficient Housekeeping," we chose not to obsessively fret over deploying the perfect seasonings. We instead shook some seasoned salt over the spinach cup and thus finished seasoning this recipe in five seconds. 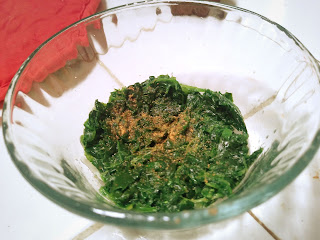 I looked up Laura A Kirkman, and she appears to have vanished into the newspaper archives of yesteryear. She doesn't even have a two-sentence Wikipedia article with a flag on top inviting you to help Wikipedia by expanding it from a stub. Her (apparently) only foray into something more permanent than a newspaper column is a recipe book published in 1929 called Bridge Refreshments. It has my new favorite opening sentence of any cookbook: "In conducting a daily cooking column for a chain of newspapers for ten years, the writer of this book came to the conclusion that one great need of the housewife of today is an answer to the question: What Shall I Serve For Bridge Refreshments?"

Any housewife of 1929 buying the new cookbook from the author of "Efficient Housekeeping" would no doubt have more pressing concerns before the year was out.

Getting back to our lovely spinach, one might criticize Laura Kirkman for underseasoning everything, but keep in mind that we are supposed to be using leftover spinach which we presumably seasoned the first time we cooked it. Perhaps we even used bacon fat in our spinach recipe. Having seasoned our clump of thawed spinach like we would have for supper, we could proceed to pour a spoon of milk into the cup, making this look like small portion of creamed greens. 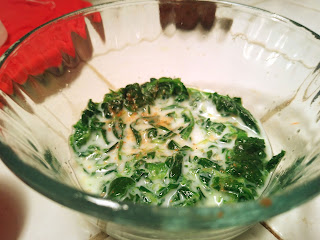 And so, we happily arrived at the big moment when this recipe finally becomes all it was meant to be: it was at last time to crack an egg on top! One could argue that today's spinach creation has a direct line to the many, many recipes of ancient Rome in which you put everything in a baking dish and break eggs on top to bind it all together. Or perhaps egg-topped baked things, like individual-sized meals encased in bread, are one of those things that every civilization on Earth has developed.

I considered sprinkling cheese on top of this before baking it, but I wanted to try this recipe as written. After all, what is the point of making new recipes if you're going to change out all the steps and ingredients you're not already used to? Besides, like pouring melted butter over lobster, burying this under cheese feels like cheating. Anything will taste good if you put enough cheese on top. I wanted to know if baked eggs over spinach are good on their own. As my pre-pandemic figure slips ever farther away from me, I am always looking for more ways to serve vegetables that are good for you without being punitive to eat. 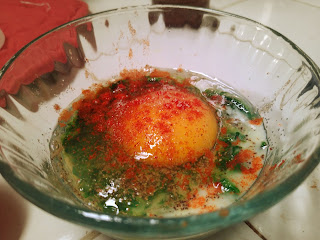 One might think I was extremely extravagant if I heated up the entire oven just for one little cup of egged spinach, and I would agree. But since one can easily slide a small glass cup between baking pans, I baked this when we already had a few other things in the oven. The spinach ramekin easily slid between all the other pans on the oven rack.

I didn't start making our little spinach ramekin until after I had gotten everything else in the oven and cleaned up every countertop splatter that I had made that evening. I thought that with such a short cooking time, surely the spinach ramekin would be ready long before everything else in the oven was. But at the end of its specified 8-minute cooking time, the egg white was still as transparent as when I cracked it onto the spinach.

Everything else I was baking was done before this was, causing me to feel an annoying guilt twinge every time I looked into the vast empty oven containing one tiny glass cup. But at least we didn't expend all the energy required to heat the oven up solely on the spinach's account. We merely delayed turning off the already-hot oven for another few minutes. As someone who didn't get my food tastes from letting expensive people tell me what to like, I never got the taste for eating runny eggs unless they are in cake batter. I will never forget the look of withering scorn I got on some camping trip (this was before I vowed to never be more than two minutes on foot from a flushing toilet and a hot shower). In the same ignorance that led me to send raw steaks back to the kitchen in restaurants before I decided I don't like steaks anyway, I told the person poaching eggs one mosquito-filled morning that I wanted mine cooked until quite firm. Where I'm going here is that I baked a perfect soft-set egg and it was wasted on me.

If you like poached eggs that are almost but not quite set in the middle, this recipe is perfect for you. I also can't help wondering if the recipe's 8-minute cooking time could have been correct had I put the custard cup in a pan of boiling water instead of inserting it into the oven undressed.

But this recipe gives you exactly what is promised.It's kind of like a spinach quiche with more visual flair and without the bother of making a crust for it. I was afraid that it would be nothing better than a clump of soggy spinach under a cooked egg, but it seems the egg and the milked spinach commingled just enough to unite into a very nice baked whole. I might add a bit of Tabasco sauce or a shake of cayenne to the next round of these, but they're still very good without. I don't think this is worth firing up the oven during the hot weather. But if you were already baking, these are very nice to slip onto the rack next to everything else.