Hump-Day Quickie: The easiest way I know to prevent a dry baked chicken

This one comes from one of my online friends:

I think we've all been baking our chickens wrongside-up all this time!

We wanted to bake a chicken but did not have the mushrooms to give it the Fanny Cradock treatment. I don't know about grocery stores outside of my current region of occupation, but around here the big cuts of meat have been far cheaper than the pre-sliced ones that get sold in shrink-wrapped trays. (I will also note that briskets, rib-racks, and any other cut of meat commonly used for showoff grilling is as expensive as ever.)

The other week, beef chuck roasts were cheaper than hamburger. The store practically had to give away the uncut extra-long pork tenderloins that can barely fit in the average home freezer. I remember pot roast night being, if not an extravagance, at least a bit of a splurge. But these days, the "fancy" and impressively big cuts of meat are the cheap ones you serve every day. I can't believe it's cheaper to serve slow-roasted chuck than meatloaf.

With everything getting more expensive, it's hardly a wild guess that a lot of people are trying to cook for themselves what they used to either purchase ready-made or eat at restaurants. And also, we all need something to do! Some people have long wanted to learn more ambitious cooking, others said "Why not?" after getting enough downtime that for once they were rested enough to do things.

I think the peculiarities in meat pricing make sense after a few moments' thought. For every person who went from making baking-powder biscuits in the Before Times to creating artisan sourdough in the Facemask Era, there are a lot of people taking their first steps beyond browning the beef for their Hamburger Helper. Prepackaged boneless skinless chicken breasts and pre-sliced pork chops seem a lot less daunting to new cooks than a whole chicken or a meat slab the size of a toaster. The big roasts seem like more ambitious kitchen projects, the little ones seem like they just need to be seasoned and put in a pan. So, I think that demand (and therefore the prices) for the big roasts just hasn't gone up as much as it has for the easy-looking pork chops. Of course, I should also note that it takes more time and effort to cut those boneless skinless chicken breasts and neatly sliced pork chops than to get a whole chicken or tenderloin packaged and out the factory door.

With that in mind, whole chickens were astonishingly cheap the last time we went to the grocery store. So, I decided to try what my friend did by accident. All I did was get the chicken nicely seasoned (I rubbed the seasoning under the skin instead of on top of it so that it would go right into the meat), put some salted and peppered potatoes around it, and let our single-pan dinner bake unattended in the oven. One cannot deny that a prostrate baked chicken looks odd no matter how perfect and crispy the skin is. 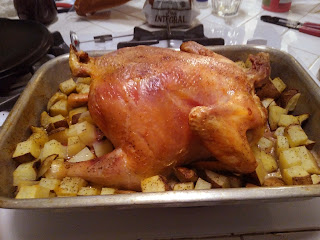 In full disclosure, I should admit that when we flipped the chicken over, it looked like this.

But you could see the juices bubbling under the skin when we took it out. After flipping it back over so it could rest in the same position as it baked (Delia Smith lets her meat rest and therefore so do I), the meat was so moist it was practically wet. Chicken juices actually exuded out of the meat as we cut it. As Fanny Cradock might have said, the chicken was marvelously lubricated.

So if you want to forestall dry, underflavored chicken breasts but don't have any mushrooms to shove under the skin, just flip that bird over and bake the chicken prone!