As some of you may have noticed, if we at A Book of Cookrye ever feature beef, it came with a Manager's Special sticker on the front. A week ago, we procured a decent-sized tray of hamburger, which the other day we removed from the freezer to thaw out. The next day, what should we find next to our still-frozen meat but.... this! 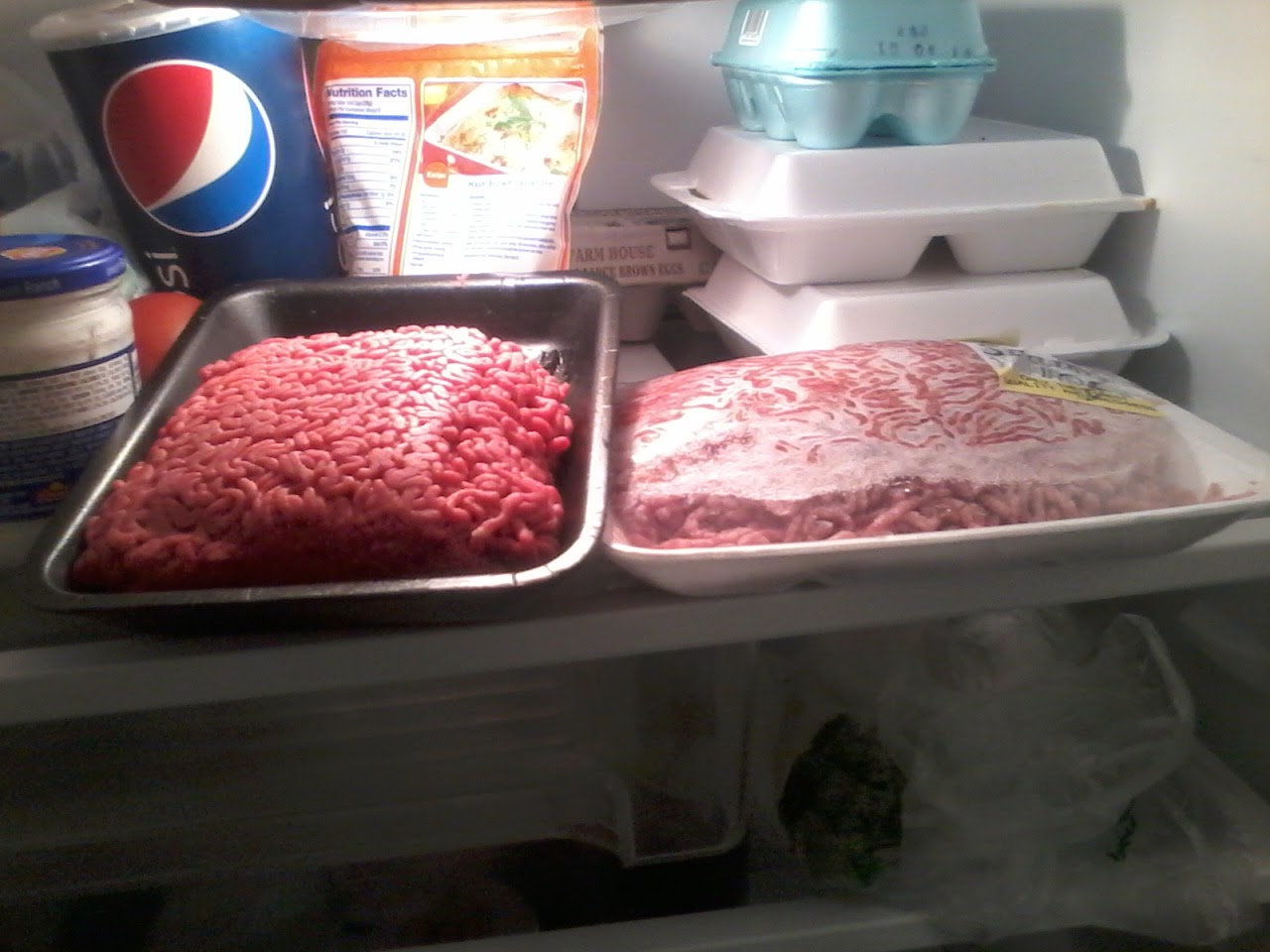 Here I must step back and explain a couple of things. The first is that the kitchen rules sign has, after the commands to clean up after yourself which some people pay attention to, is a line that any unlabeled food in the refrigerator is fair game for everybody. This one everyone takes seriously. People routinely will examine everything in the refrigerator very carefully, hoping that the box of Hot Pockets does not have someone's name written on it.
Second, er... who the heck leaves an unwrapped tray of raw meat in the refrigerator like that? I don't have to say much about this being how disease starts, do I? Since it's already headed for the trash before it goes rancid, it seemed only practical to divert it ovenward.
This meat was unlabeled, unwrapped and a sickness epidemic waiting to happen. Clearly some divine force had finally decided that my grocery budget deserved a heck of a windfall in the form of cow. This meant it was time to try a recipe from this book I've been wondering about for a while:

...and also to make a meatloaf because I effing love meatloaf.
I got these apples from the discounted produce rack, although I don't see what was wrong with them aside from a couple of wrinkles.

I actually didn't pick this one recipe for the sake of personal terror. For some reason, it honestly looked like one of those "you never think it'll work, but once you try it..." sort of recipes. Kind of like apple pie with cheese on top, you just never know. Also, there was a lovely surprise from grinding the apples: an awful lot of juice dripped out the back of the grinder into the bowl I had set under it. You know, the opaque stuff that's not from concentrate and actually tastes like apples.

However, I had no idea whether I was supposed to use equal volumes or weights of apples and meat. Going with the path of least effort, I just eyeballed it.

Ever wondered what beef and apples look like mixed together?

Here we come to where the recipe and I diverge. Fry these? Although you just know it's good, I really didn't want to eat fried foods right now. They went in the oven. I coated them in flour anyway, and you can see the outside trying to become a crispy outer skin. 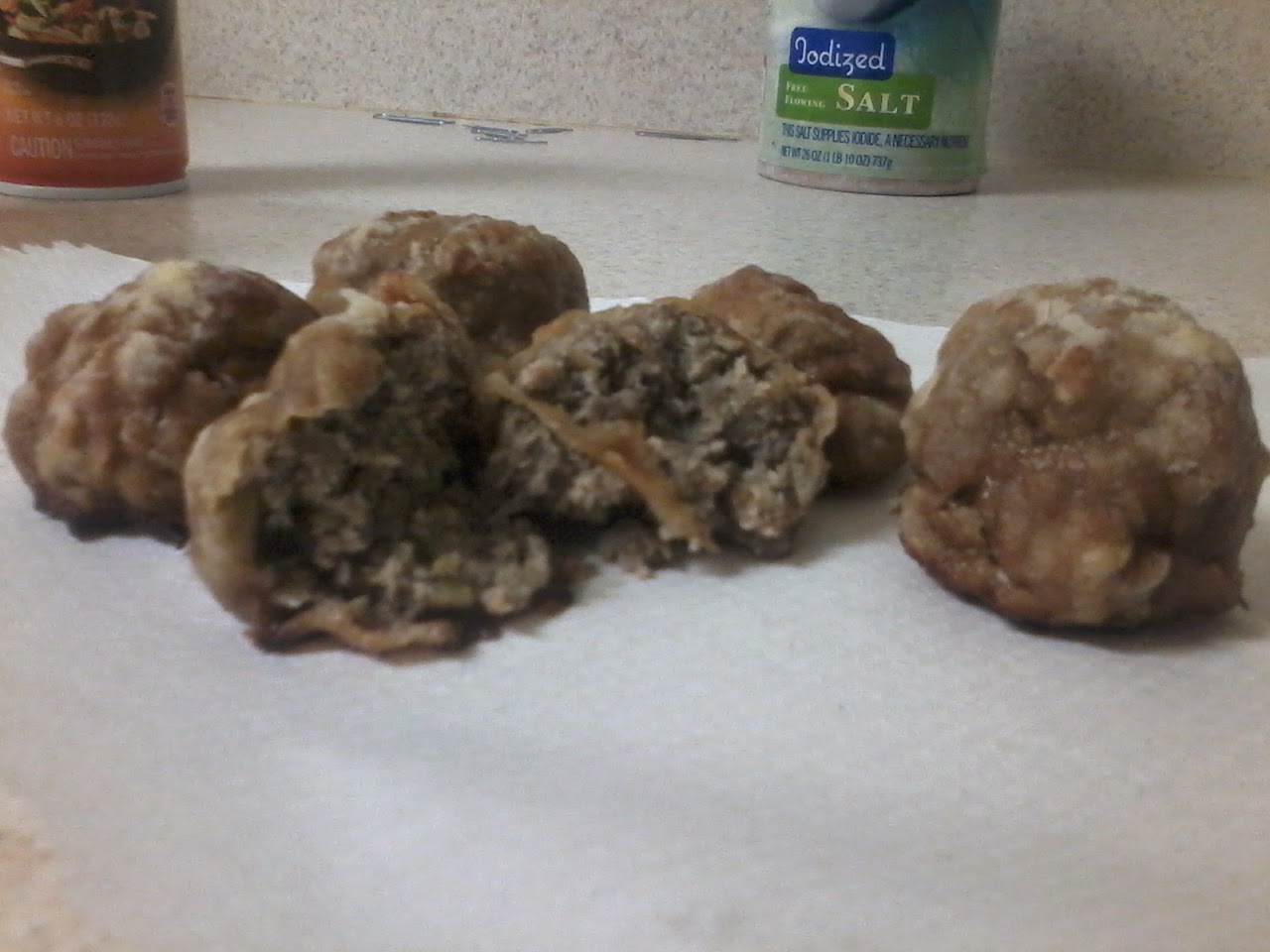 As for the taste: Honestly, these are really good. A lot of times when we put sweet things on meat, it comes off as overly sugary like crappy barbecue sauce. This was subtle, and the apples' tartness was absolutely delicious. These did not last long, and I would totally make them again. However, they seem like they're supposed to go on top of something and I have no idea what. Is there a sauerkraut casserole recipe elsewhere in the book that ends with "Top with Mrs. W. J. Bailey's Apple Meat Balls"?
However, my free-meat-induced euphoria (I was actually singing, to the tune of Happy Birthday, "Merry Christmas to me, Merry Christmas to me...") was nowhere near done. You may have noticed that was a big tray just waiting there, and I only used a handful of meat for the apple balls. I hadn't had a meatloaf in a long time.

This was the best meatloaf I've had in a long time. No breadcrumbs, no egg, nothing but (free!)  meat, green pepper and lots of garlic.

I didn't care that the pan looked like this when it was baked.

I also didn't care that the grease spattered so much I had to run a cleaning cycle in the oven so it wouldn't fog up the kitchen the next time someone turned it on.

Every now and then something goes really right, and heck yes this was awesome. Plus, I got to give away some of the meatloaf to others to pass on the windfall. La vie, c'est si bon.
Posted by S. S. at 2:52 AM