A Book of Cookrye goes south!

As previously mentioned, we at A Book of Cookrye pounced on some steeply discounted plane tickets to go to... 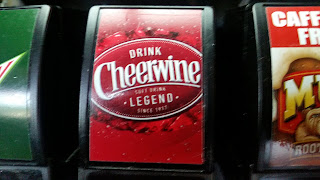 Indeed, we went to Charlotte to visit friends! This is actually the first time I've been to what people near-unanimously agree is the Deep South. Granted, I once journeyed to New Orleans which people definitely agree is very Southern, but New Orleans is this distinct mix of French and American that really doesn't exist outside of Louisiana.

At any rate, apparently I am fated to return to Charlotte, as the construction signs proclaim that the airport is already preparing for my next arrival!

All right, obviously no one's actually renovating an airport just for A Book of Cookrye. That's just one of the many references to Queen Charlotte in the city. Not only is she the city's namesake, but she's also a sort of municipal mascot. Which I find deliriously amusing, given that she was the wife of King George III, who (for those of you who are not from the US) is the chief villain and all-around bad guy in American retellings of the war for independence from Britain.If you're not from the US, you may not understand how much spite gets dumped on him in our history books. He's right up there with Satan and the guy who shot John Lennon. So, to discover that an American city made a mascot of his wife caused us no small amount of snerk.
But we at A Book of Cookrye, though we thought we were going to Charlotte, actually barely stayed there long enough to drive right out of town to where our friends live. Since we live in a region that exists in perpetual drought, we were utterly stunned at how green it is once you leave the city. 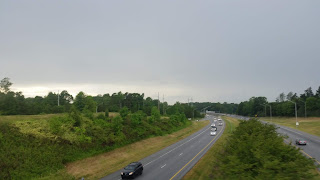 It's so green, even the cell towers have bushy green needles!

Granted, they don't look like healthy pines so much as they resemble the artificial Christmas tree someone bought in 1972 that has been shedding bristles ever since. But doesn't it blend right into the surrounding forest?
Though in all seriousness, Carolina really is gorgeously green once you leave the city. It even smells like pine and flowers when you step outside. This is the apartment complex my friends live in. Keep in mind, this isn't a super-upperclass area with a small army of gardeners on retainer. Things grow so well here, this is low-budget, almost-minimum-effort gardening.

All right, enough of the great outdoors (though my raised-in-a-drought-zone self couldn't believe how lovely it is). This is A Book of Cookrye, not A Book of Botanye. And we are in Carolina, where the gas stations have drive-thrus! 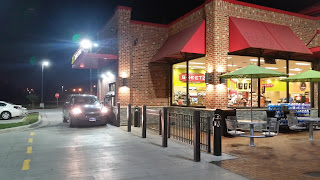 I should note that we first stopped at a semi-posh restaurant but I kind of had to leave. You see, I've been broke with irregular income for so long, I unintentionally learned how to read the prices on a menu without seeing anything else printed on it. Furthermore, I am not what one might call fit for being seen in high-class establishments. All the people who can actually afford such places always glance over their tables at me with some very expensive stink-eye. I'm sure that the place was lovely, but I panicked from the combination of the expense and the judgemental patrons and couldn't order anything more than one of the cheapest, tiniest plates from the list of side dishes. So what did we find instead?


Indeed, we were taken to Sheetz, which has yet to open a location in our state. One of their gimmicks is using the letter Z wherever possible on their menus and price signs. 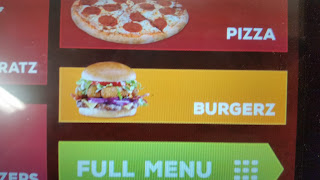 The further you get from Mexico, the more interesting the burritos get. 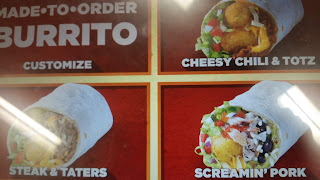 To be fair, they didn't even try to call them Mexican, instead calling this the Mexican-American. Also, to be fair, a chili-cheese-Tater Tot burrito is probably insanely delicious. Also, this gas station had Cheerwine (which is only sold in a tiny region of the US) and its even rarer diet cousin.


But enough of gas station restaurants. Naturally, few people can go en voyage for a week and eat out the whole time. And so, we were taken to Publix! That chain has yet to venture to my region of America, so this was quite the cultural experience. First, they have a very creative and amazing floral department. 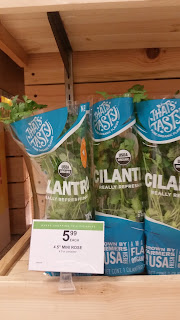 In case you forgot this is the south, they sold cast-iron skillets right alongside the other pots and pans. And these are the deep ones that you can use for all the usual skillet things, plus deep-frying. 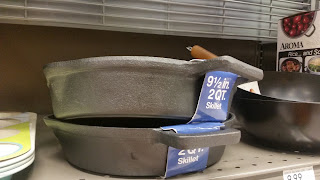 Had I not had to consider the price of checking a second suitcase, I might have gotten one of these adorable blue-green things. 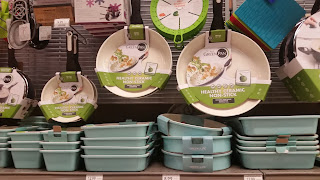 Furthermore, what should have equal shelf-space with the pickle relish but these: 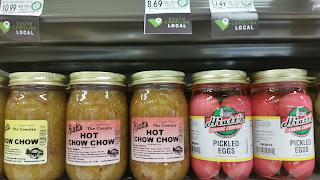 I've only seen chow chow sold at either the folksiest of farmers' markets or the foofiest of foofy grocery stores. But here it is right next to the pickled eggs floating in a mysterious magenta fluid (side note: who eats pickled eggs?)
Also of note, has anyone else noticed that Jimmy Buffet is turning into a vertically-integrated business entity that may come to rival Disney? He has multiple Margaritaville resorts, Margaritaville casinos, Margaritaville restaurants, Margaritaville clothes... he has even invaded the frozen dinner aisle.

You have to give the man credit. Walt Disney had to create multiple movies and characters before he could make an empire out of them. Jimmy Buffet has managed to do the same thing on just one pop song.
Now, since we were in Publix, which I am told is renowned for their sandwich counter, my friends wanted to treat me to one of these apparently famous deli creations. But I quaked at the prices and we ended up getting this instead. 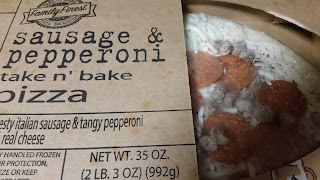 My friends would come to regret taking me to the next (slightly cheaper) supermarket as soon as I saw the name... 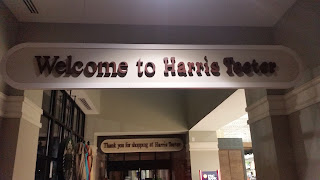 If you didn't the last time we mentioned it, say "Harris Teeter" out loud. You almost inevitably end up with a southern accent about halfway through "Teeter" unless you really carefully enunciate. And if you do that, you end up sounding a lot more prim than anyone saying "Harris Teeter" ever should.
Just to prove that they're dead serious about the name, they even put it in the floor tiles.

This is such a happy store. They put this right in front of the door to greet who might soever walk in: 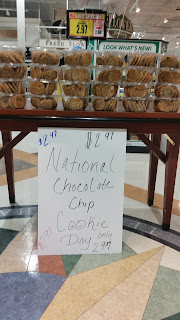 Indeed, you might even say the sparks flew as we entered! 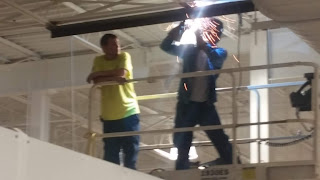 In true Southern fashion, they had some passive-aggressive commentary in the grocery store signage. I detect a bit of amusement aimed at those who purchase things like kombucha, coconut water, and aloe juice:

I forgot that not only I was in the south, but I was (nearly) on the East Coast until I happened to pass through the beer section: 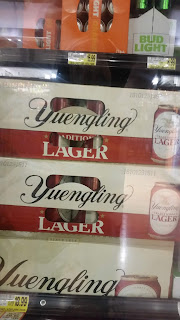 Oh Yuengling. How I do miss being within your distribution zone. Even if the guy currently running the company is an unrepentant douche.
Elsewhere in the Harris-Teeter, we found what must be the poshest egg selection I've ever been allowed to see: 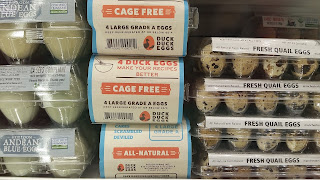 Real actual quail eggs! Duck eggs! Eggs from those chickens who make blue eggshells!
You know what? All this fanciness and high-class stuff is getting a bit overwhelming, so why not leave the expensive refrigerator case for the sodas? Surprisingly, these were priced about the same as what one might pay for a bottle out of a vending machine rather than painfully expensive. 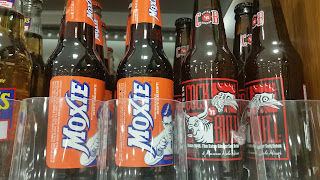 As a side note, it seems that semi-upscale sodas sweetened with sugar instead of high-fructose corn syrup have become popular enough that even the cheaper supermarkets sell them. 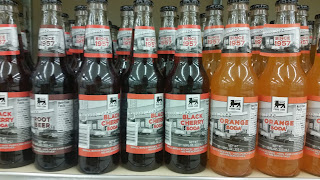 Back to Harris-Teeter, where I mortified my friends with my excessive taking of pictures!
You may be thinking that A Book of Cookrye has never featured such high-tax-bracket groceries unless they were a manager's special. And you would be right! Our grocery cart looked less like quail eggs and more like this: 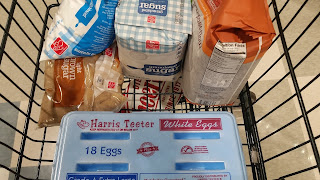 Particularly observant readers may notice the one not-store-brand item we decided our wallet would permit. Perhaps it is an extravagance, but have you ever had a Cheerwine float? 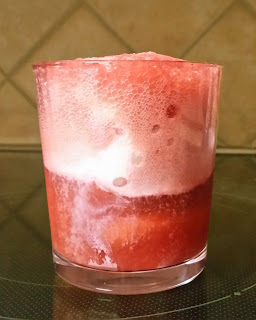 However, perhaps one is not in the mood for cooking at home. Indeed, one of the nice things about going abroad is that the food gets different. However, before going out in public, we had to first stop and wash clothes, whereupon I was treated to perhaps one of the most elegant, simple, and creative acts of laundromat vandalism I've ever had the privilege of seeing. 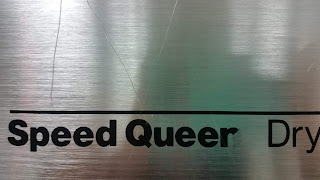 And so, we at A Book of Cookrye went to our first actual restaurant that wasn't a service counter in a supermarket or a gas station!

Guess which of these two cups is a large! 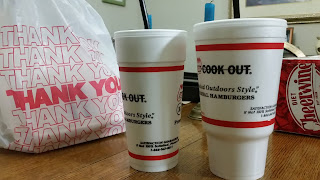 Incidentally, it is true that iced tea in the south is so sweet you can pour it on pancakes.
All right, we've gotten lovely drive-thru, we've dined at gas stations, and we've cooked for ourselves! Why not go out in public?
Indeed, there are so many things to see, like one of the first Krispy Kremes to open in America. This location has ridden the meteoric rise of Krispy Kreme, survived the severe Krispy Kreme crash that followed, and continued selling "hnuts" 24 hours a day for decades. 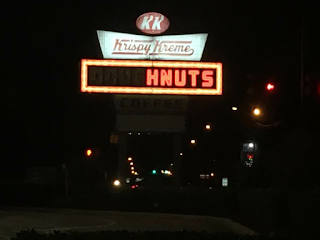 Elsewhere during daylight hours, we passed by this pizza place that inspired some surprisingly passionate rants about the lousy food. I do think it's adorable that they used one of those cheap Tiffany pizza-parlor lamps for their logo. 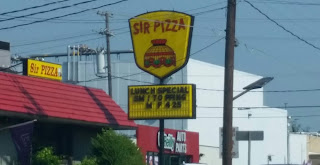 But all too tragically soon, this visit came to an end, and all my things had to go right back into the cases.

But there was one consolation to having bid goodbye to close friends and air so clean it smelled like pine and honeysuckle: I had stashed in my case some gift cards to places where I never allow myself to spend my own money.

And with that, we at A Book of Cookrye were whisked through the air back home!
Posted by S. S. at 4:05 AM