Applesauce Cake: or, Tasting the 20s

You will never believe what I somehow got my hands on! 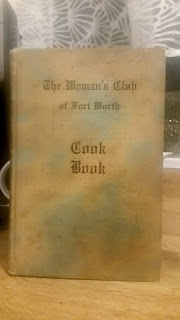 Yes indeed, the 1920s cookbook I scanned a lot of pages out of from my library's Special Collections turned up for sale online! What's more, it was priced like a used book and not like an antique, so I could actually afford it! There was just one teeny little problem... 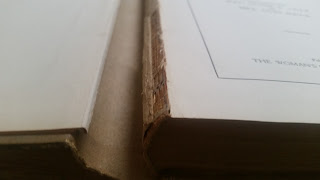 I'm surprised that my copy was falling apart while the library's copy remained intact. Theirs is covered in pencil notes, handwritten recipes, recipes cut out of newspapers and tucked in the pages, and other signs that someone cooked out of it a lot before it landed in an archive. This copy has no sign at all that anyone ever so much as opened it on a kitchen counter, so why is mine the one that's falling apart? Maybe the library had to give their copy surgery a few times too.
But, all was not lost! I used to work in a library, so I am very familiar with the existence of library book mending departments. Several phone calls to various universities later, a very nice person agreed to fix it for me at no charge. Do you know how much book repairs usually cost? It's both 1) a very skilled trade, and 2) an increasingly rare one. The only thing I had to do was spend a long time waiting to get the book back, because they were going to have to do it when the library had relatively few books in line to get fixed.
I gotta say, it's so nice to be able to flip through the book whenever I want, without worrying that the library will want it back soon. I notice little things like this, which I'd never have seen if I was worried about having to imminently hand it back:

But we're not making meat-stuffed potatoes today. We're flipping to my favorite part of any cookbook: The desserts! And we are making....

Substituting applesauce  for butter in cake and cookie recipes has been making the diet-advice rounds for a while now, but I don't think it was something people did to try to make desserts less fattening in 1928. Therefore, one can assume that we're using applesauce instead of butter in this cake for the flavor, and not because it is supposedly more slimming. In theory, Mrs. Belle S Brown (one of the few married women in this book who gets her own first name printed) made this cake because she wanted a cake that tasted like apples, and not because she was trying to lose weight without completely sacrificing cake.
Actually, a lot of people apparently liked applesauce cake at the time.  Kind of like how modern-day community cookbooks usually have multiple recipes for banana bread or for lasagna, the desserts chapter of this book has a lot of applesauce cake recipes. At any rate, it seemed a promising sign that the cake would come out really well.

We happened to have this strawberry-applesauce in the refrigerator that kinda got forgotten, so that's why applesauce is so pink. Also, the applesauce-sugar residue that stuck to the measuring cup tasted absurdly good.

As happens a lot in community cookbooks, there are literally no instructions. (Could be worse, some recipes in this book don't list all the ingredients for some reason. Maybe the missing things would have been obvious to anyone cooking in 1928.) But we at A Book of Cookrye haven't made it halfway through an associate's degree in cooking without learning a few things about cake mixing. 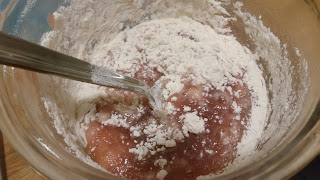 And so, we figured we'd do the method where you cream the butter (here replaced with applesauce) and sugar, then alternately add your milk (here replaced with water and baking soda) and flour. It worked all right until we added the first splash of soda-water. Please note 1) the lovely pink color of the batter and 2) how low in the bowl it is. There isn't even enough batter to completely cover the business end of the spoon. Now have a look below. 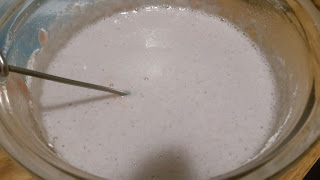 Yep, the batter fizzed up almost like those baking soda-vinegar volcanoes we all did. And it turned a really ugly, nasty shade of gray. The fact that the batter apparently did all its rising in the bowl made me worry about how this cake would come out of the oven. If I stirred all the bubbles out of it getting the rest of the flour and stuff in, would it stay flat the whole time it baked?
I wasn't worried about the color (mainly because I figured once your cake goes to gray, it will stay there so you may as well embrace it), though I did kinda hope the spices might dye it at least a little bit brown. 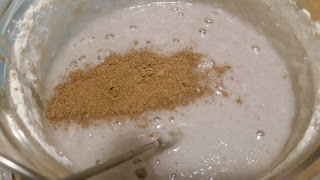 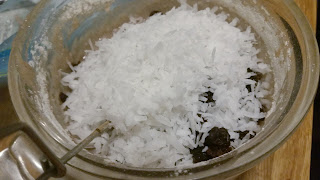 And now we add the last two things! I was actually oddly excited about putting in coconut in this. Apple and coconut seem like they'd go really well together (assuming you like coconut). 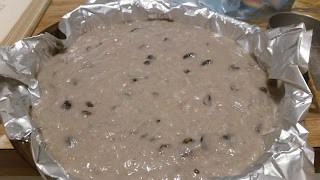 That is one ugly cake, isn't it? The coconut is not doing it any favors. It looks like either little white bugs or like the batter was really lumpy and I baked it anyway.  At least it turned a decent shade of brown on top. 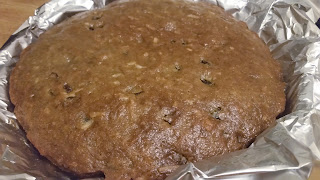 The cake did at least get a little bit color to it in the oven. The coconut still likes little lumps of something that shouldn't be in there, though. Also, despite my fears, it did in fact rise like a cake should. 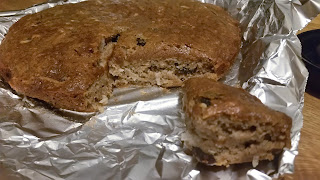 As for the taste? It's really dense like gingerbread, and marvelously apple-y. You can just leave the coconut out. You can't taste it, and all it does is get stuck in your teeth. However, it is really good. I'm planning to make this again, only using a lot more spices. Since it is dense like gingerbread, and kind of tastes like it already, we may as well not try to pretend it's a cake.
Also, this got a lot better after aging about two days. I had it in my locker so I could have a snack between written tests, and it got a lot better toward the end of finals week.
Posted by S. S. at 2:19 AM