We at A Book of Cookrye recently volunteered to bring potato salad to an extended family cookout. Now, to be quite honest I never really cared for potato salad. In fact, I've never actually eaten it before- aside from occasionally tasting it to find out that yep, I still don't like it. Therefore, volunteering to bring it probably surprised everyone as much as if I'd volunteered to smoke a rack of ribs (note: I have never successfully operated a grill in my life and every single person in my family knows it).
But, the reason I made such a generous offer is that I get to make.... this!

Yep, spud Jello! I've been reading Mid-Century Menu for quite some time, and  This isn't the first time I served unsuspecting relatives food from the more dreaded parts of culinary history. I've previously brought in foods from Depression-era Britain (a time period which no one wants to taste again). Now, RetroRuth has stated that this recipe may look dreadful and creepy, but it's actually really good. Since we know there are no lies on the Internet, that must mean people will like this potato salad... right? Though in all seriousness, I have made a few other recipes from her site, and she has yet to mislead me when she says whether something's good or not.
Well, let's get on with it, shall we? 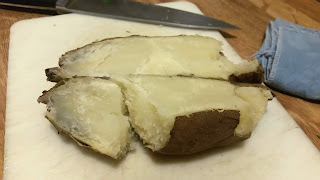 I couldn't justify boiling a pot of water long enough to boil a single potato, so this spud got microwaved instead. As a brief note on cooking technique, we at A Book of Cookrye do not understand why people bother peeling potatoes beforehand which is maddeningly tedious and also sends so much of the potato into the trash can. After it's cooked, you can just pick the skin off with your fingers in a few seconds. And as you can see, there's practically zero wasted potato clinging to the skin. 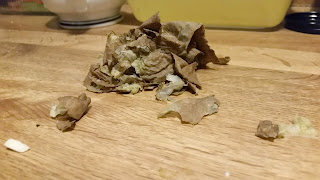 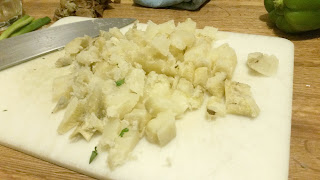 Interesting thing about boiling eggs is that absolutely everyone we've met who does it uses a different method which they swear by. Yet no two people we've ever met do it the same way. We at A Book of Cookrye, since we never really liked boiled eggs, didn't actually even try to make them until well after we could legally buy alcohol. It's really hard to make them because you can't test them to see if they're done- you find out after you cut them open and can't return them to the water if they weren't done yet. After several attempts which either were still runny in the middle or had that bright green ring around the yolk that drives so many people to a fury, we let Delia Smith show us how.

Right, that's the eggs done. If you're not doing the elaborate molded presentation with the flower garnish, the rest of this recipe is just chopping things and stirring them together.

All right, so this is where we get to just dump everything in a bowl and call it a potato salad. Or so I thought. I checked the ingredients list and saw it called for whipped cream. I remembered to buy it the night before, but I hadn't actually whipped it. I thought about getting out the electric mixer, but since we're cutting this recipe in half, that bowl contains only a quarter cup of cream. Was it really worth setting up the power tools? Besides, I've seen all those cookbooks that say that it comes out so much nicer if you do it by hand.


For those who haven't tried  hand-whisking cream themselves, it is not as hard as you may think. This took five minutes. However, five minutes of unceasingly stirring something really hard will still give you a sore wrist. I mean, it's feasible, and I guess hand-beating cream is easy enough that you can do it without really exhausting yourself, but unless your mixer has suddenly burned out and you need to have whipped cream before you have time to replace your dead appliance, I wouldn't bother. 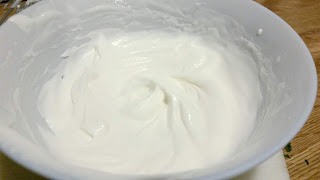 Really, what annoyed me the most was that I couldn't just buy the just the one quarter cup of cream I needed. No one in Our House of Cookrye uses cream, ever. And cream seems to have a shelf life as short as that of strawberries once you get it home. So it's not like we could keep this partially-used half-pint (the smallest size I could get) until someone someday needed it. But to prevent waste, I just made whipped cream and popped it in the freezer. If you take away nothing else from this post, please leave with this: You can make whipped cream, just put it in the freezer, and it will turn into absolutely delicious ice cream. And you can easily make very tiny batches and experiment with truly weird ideas; if something turns out terrible, you can at least have used very little ingredients or time making it.
And so, waste has become dessert! 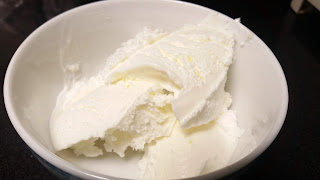 Right, um, let's move away from delicious and easy homemade ice cream and go back to potato gelatin. 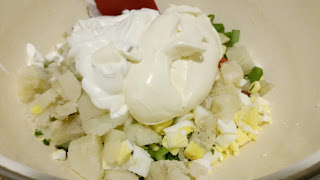 Sitting next to each other on top are the whipped cream and the mayonnaise. Now, the latter is what I was the very least excited about putting in this.One of the reasons I do not like potato salad at all is that it has so much mayonnaise. While mayonnaise is a perfectly lovely ingredient, it's not something I want to eat big globs of. And here I just plopped a huge splot of it on top of all those vegetables I spent all that time chopping. I wasn't even worried about the gelatin- after all, Mid-Century Menu has assured me that this is in fact a good potato salad despite the gelatin. And she never steered me wrong when I tried a recipe of hers before. Even the chocolate cake with canned tomato soup in it, as bizarrely wrong as that sounds, was so good I served that to people without telling anyone what was in it and people fought over slices and demolished the whole thing.
Speaking of gelatin, I forgot to add it. Like any good secret ingredient, it hid under everything else as soon as I dumped it in, leaving behind  only a glistening trail of pepper flecks as it made its way to the bottom of the bowl. 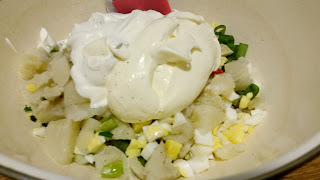 See? Practically invisible. You'd never know it's there. Actually, nothing looked wrong with this salad until you stirred it together and it turned to glop. 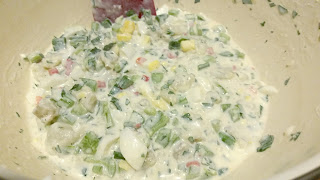 This isn't potato salad, this is a soup! As already mentioned, I am no potato salad expert, but I always thought they should not be a bunch of cold things swimming in white goop. But I was only slightly worried. I told myself that this is almost exactly what this recipe looked like on Mid-Century Menu- hers turned into this pathetic goop just like mine, and in the end it was so firm she could unmold it and the little vegetable designs she put on top stayed in place. Besides, once I got it in a container, it didn't look so bad. It especially looked all right in photographs, which don't show you how runny it is. 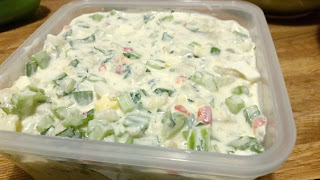 Heck, from the side, it even looks exactly like what one might purchase by the tub at the supermarket on the way to a cookout. 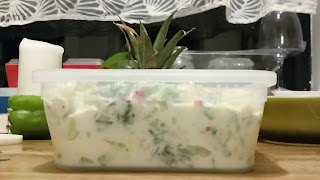 The next day, it looked exactly the same as the night before. But the gelatin had been very busy all night. It looked like a perfectly innocent potato salad. The only way anyone could tell something was abnormal was if they decided to flip the container upside down.

I must admit I chickened out at the end of this recipe, and did not unmold the salad from its container. In my defense, this is a simple case of knowing your audience. In this case, these were my relatives, and they do not like it when a potato salad can stand up on its own.
But I think word did get out, because an awful lot of people were asking what's in it in slightly suspicious tones. However, the gelatin was not as obvious as you might think. Sure, this was the first potato salad I've ever seen that you could cut in slices like a cake, but it didn't have that jiggliness one associates with gelatin molds. In case you doubt my word on how good this is, over half of the potato salad was gone, which is a pretty good rate for a side dish at a cookout. Even those who didn't like boiled eggs ate a full portion of it. This is how much salad was gone by that evening: 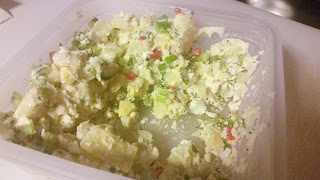