Sometimes when you're far from home, the recipes you make come from even farther away. One of my friends received this recipe from an online friend in Slovakia: 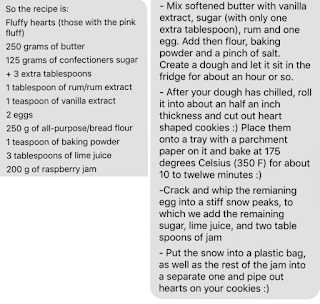 First of all, isn't punctuating every other sentence with a smiling face adorable? Second, I must say I find the mixing of metric and tablespoons to be very amusing in light of having seen a lot of bitter nerd rage spewed in online forums over metric vs customary. Fortunately, a kitchen scale was at hand! You can see it under the measuring cup, because I was writing down the cup measurements in case I want to make this recipe without one.

But what really marks this recipe as non-American to me is the use of liquor as a flavoring. Perhaps we in America haven't recovered from all the Demon Rum speeches that culminated in Prohibition, but I rarely see any recipes that use any form of alcohol as flavoring unless it is the main flavor. Or at least, I don't see alcohol used on equal footing with other flavoring extracts in realistic cookbooks. You see the odd teaspoon of brandy or tablespoon of whiskey (whisky?) in a handful of recipes in those coffee-table volumes of food porn (you know, the ones on the stand at Williams-Sonoma), but people tend to purchase those books more to admire the photographs than to cook out of (a pattern interestingly described in this 2010 celebrity cookbook review). You do see the wine, beer, and liquors used right alongside seasonings and extracts in American recipes up until the temperance brigade gained popularity. Apparently other countries (or at least, some person in Slovakia who sent a friend in Carolina this recipe) don't have the same alcohol-related hangups, otherwise we wouldn't be adding a spoonful of rum to raspberry-lime cookies.

To my minor annoyance, my friends have no printer (which seems to be getting more commonplace these days), and therefore we were looking at this text off of a smartphone. I know a lot of people do that, but I personally get very annoyed after I keep having to read a recipe off a screen the size of an index card without accidentally tapping the wrong spot with my floury hand and making the phone close the recipe and do something completely random. So I decided I would measure out everything all at once and thus not have to constantly re-check what the phone said. 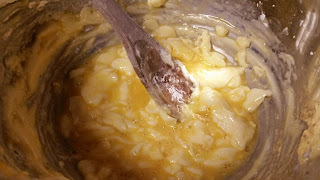 My first mistake was dumping all the first things in the bowl. Whoever typed this out just said to mix them. I should have realized that people giving recipes to friends often skip obvious directions if they know the recipient doesn't need to be told every step. Of course, we didn't mix anything so much as end up with butter lumps swimming in random stuff.
Fortunately, we could switch to a whisk and bash things to-- if not completely mixed, at least nearly so.

I wasn't at all worried at the sight of this. You see, I hadn't added the egg yet, so there was nothing to force all these things to stay mixed. Therefore, presumably, so long as we didn't have any large chunks of stuff floating around in there, it would all mix right together--- right? 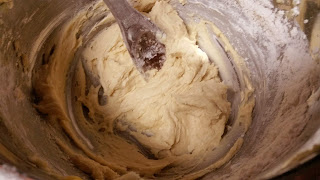 Very right! Furthermore, this tasted fantastic! The slight hint of rum (well, brandy but we can pretend) added a nice subtle taste to the vanilla. Let's roll, cut, and turn these into tasty cookies! I thought I had seen a stash of cookie cutters in the very back corner of one of the cabinets. However, dragging it out from the depths showed it to actually be a lot of various craft supplies, none of which would work for cutting cookies. And so, a shotglass was brought into service instead. We could have used a regular glass, but they were all so big that we would have only gotten 7 or 8 cookies out of this whole batch of dough. 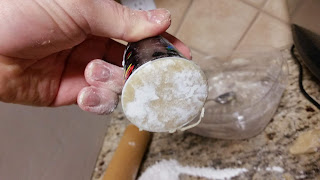 For those trying this at home, a shotglass cuts out adorably dainty-sized cookies. They come out small enough to be cute, but still big enough not to disappoint when you eat them. However, since you're cutting out such little cookies, the dough doesn't have enough weight to fall out of the cutter on its own. Since you obviously can't push it out (at least not without cutting off the bottom of the glass), you should have a can of cooking spray on hand to spritz inside the glass every so often. Even then, they will be kind of fussy to get out of the glass. 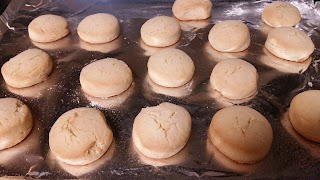 Aren't they cute and puffy? We almost didn't get to ice any. A lot of the cookies mysteriously vanished while we were waiting for them to cool off. Just as well, it turns out one egg white doesn't make an awful lot of icing. Which is just as well by me, since this isn't a huge batch of cookies. 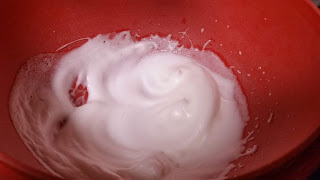 Once we added the sugar, the egg whites stood up very nicely. Given that my friends have no cookie cutters, I was not surprised that they also have no icing-bag tips. (It's like I own any myself.) No matter, we could easily put this in a little bag with the corner snipped off. 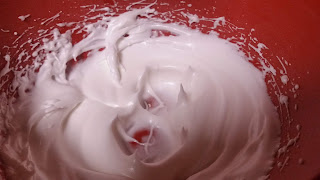 Here, we at A Book of Cookrye want to recommend actually reading the recipe perhaps more than once before you make it. I didn't realize you're only supposed to put 2 spoons of the raspberry jam into the meringue, and instead dumped in all of it. Adding that much jam removed all chance of the fluffy stuff standing up in jaunty peaks. 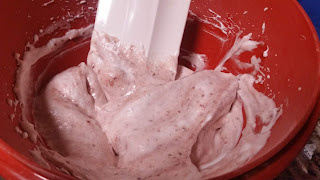 Giving up on the whole piping business, we just sorta dropped the stuff off a spoon onto the cookies. It mostly stayed where we wanted it to, and actually managed to accidentally look cute. Also, the icing lasted a bit longer than you might think-- if you kept the cookies in the refrigerator, the jam re-hardened and kept it from deflating and drying out. 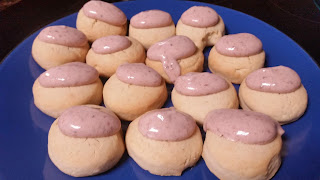 As for the taste? These are really good! The raspberry-lime icing is really fruity, and the cookies have a nice subtle sweetness and interesting flavor. Rolling out the dough really thick like the recipe said was a good choice. The cookies didn't dry out in the middle, but stayed delicate and fluffy as the recipe name promised. Do try these!
Posted by S. S. at 12:21 AM