We at A Book of Cookrye must reluctantly bid Carolina farewell. It's not returning home that stings, it's parting with the lovely friends we were visiting. But we decided to simultaneously bake a parting gift to leave behind and to make ourselves some airport snacks for the long, multilegged flight home.

This is the second recipe I've ever tried for gingersnaps. The first one, which I made a few times, came from my mom's massive Betty Crocker cookbook. No matter how many times I made it, they were always really soft and chewy. But because they were really good cookies, I made them a lot. I even started making them a lot bigger than gingersnap-sized, and the big, soft spiced cookies had become one of the more popular recipes in my preteen repertoire.
Though at least once I was mildly embarrassed when giving them to someone. I'd made yet another batch of them (by now I'd just accepted that this recipe would never produce gingersnaps that actually snapped) and announced that I had made "ginger cookies." Which was technically true. I almost gotten away with it, and yhe recipients had decided they really liked them. But then, someone had to expose me by saying that the recipe was supposed to be for ginger snaps. Thus I had to deal with an endless barrage of half-baked cracks about "So you made ginger bends?"  I learned an important lesson: if you're going to try to sell people on a recipe that came out completely different than it should have, never tell anyone what you were originally trying to make.

At any rate, let's find out if this gingersnap recipe actually makes gingersnaps that snap. 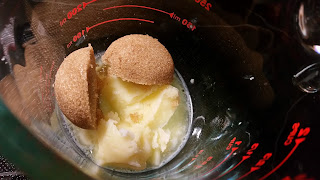 You may notice that this does not look like the full quantities specified in the original recipe. And you would be right. In case this recipe turns out to be a dud, we're cutting it down to one eighth the original amount. If it comes out all right, we can make more. Though unless I for some reason feel compelled to make gingersnaps for 500, I doubt I will ever make the original amount with its one-cup-shy-of-half-a-gallon of flour. 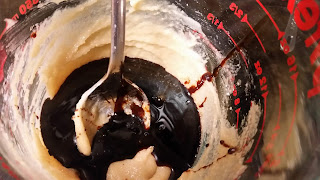 I do find it odd that no one put her name under this recipe. You see that from time to time in these cookbooks. Maybe someone in the Committee (always capitalized) was reviewing the submissions and cried out "Good heavens! We are printing two recipes for corn pudding, but no one submitted a recipe for gingersnaps?" before inserting a recipe at the last minute.


Now, anyone reading the original may think "Good gravy, that is a LOT of gingersnaps!" I mean, the recipe calls for seven cups of flour, which is only a tiny bit less than a half-gallon. That says a lot about the recipe itself. One gets the idea that either people made these in huge batches to keep on hand (after all, you never know when you'll need a cookie but not want to get out a bunch of bowls), or that people usually made them for really social times when you'd need a massive load of cookies. Fortunately, this recipe uses no eggs so you can cut it down to a tiny little batch without having to mutter "...What's one third of an egg?"

This recipe produced some oddly tough dough. It felt almost but not quite rubbery. Usually, when cookie dough almost bounces, you have severely erred. However, I had carefully followed the instructions. Perhaps this is why the submitter did not put her name to the recipe- she didn't want to be shamed and lambasted at Club meetings every time someone tried to make the cookies. But on the bright side, the dough tasted very gingersnappy. 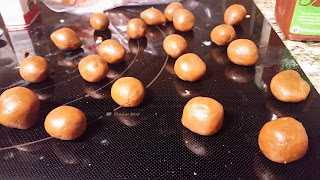 Generally, when cookie dough actively fights back at your attempts to shape it, your recipe has problems. And tough, almost-leathery dough tends to have this off-putting taste to it. But it was too late to stop cookie production now. The oven was preheated, the pan lined with foil, and I'd spent all this time making dough into little balls. 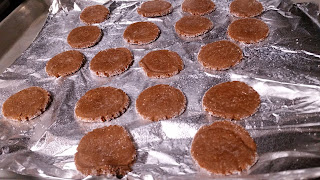 They didn't look at all different coming out of the oven. I'd expected them to maybe rise a little, or to spread, or to do something in the oven besides just sitting on the pan resisting all change. This made it hard to tell if they were baked or not. Eventually I figured the edges looked at least a little darker, so that's as good a sign as any to turn off the oven and admit probable defeat. 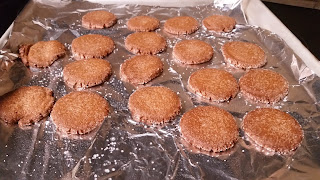 But happily, these did actually turn into gingersnaps! I would have pressed them out even thinner than I did in the above picture; they get really crunchy. Also, these are really strong cookies. A lot of crisp cookies will break and shatter if you try to take them anywhere. This is what I had to snack on between flights. Behold how intact they remained after I jammed them into a bag that had a very rough journey on an airplane through near-constant turbulence!