Beaten Biscuits: or, Extremely vigorous use of expensive power tools

Today, we at A Book of Cookrye present a visit to someone else's Carolina kitchen! As aforementioned, we somehow made it through airport security and thus flew out to visit friends. What should we see tucked away in the kitchen in its own little cabinet, sitting under its very own little (quilted!) jacket, but.... 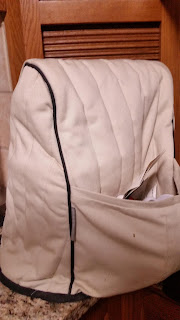 Indeed, while I am using an extremely old stand mixer (which you can see here), the lovely people I am visiting own that standby of people with more spare kitchen money than I have: a KitchenAid mixer.
I'm somewhat surprised at how long KitchenAids have been display appliances. Other brands have gone in and out of style, but for whatever reason KitchenAids have held remained essential display pieces for any trophy kitchen long after people stopped putting Cuisinart food processors or Jenn-Air stoves under spotlights for guests to admire.
At any rate, the pocket on the mixer's little jacket held the whisk and the dough hook, so we at A Book of Cookrye decided to see if this thing runs well enough to make one feel less bad about how much it costs. And so, we decided to make...

It is very fitting that we should make such a southern thing while en voyage to the deep South. If you do an internet search for "beaten biscuit," you will find lots of articles calling it one of the oldest and most ancestral of Southern foods. A lot of articles talk about how they went out of style because the dough was so much work (like, over an hour of kneading) to make. But now that we have electricity in nearly ever home, are these something that we should bring back into the kitchen?
Mostly, I wanted to test-drive the KitchenAid. We have the commercial model in cooking class, but this is the first time I've ever encountered the home version. And what better way to test it than by using a recipe usually written with violent instructions? 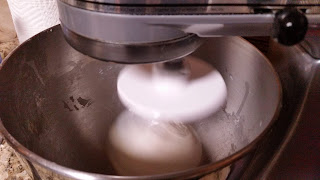 You see, the "beaten" in the name "beaten biscuit" is apparently no exaggeration. You know how if you overwork bread dough, it becomes tough? It turns out that if you overwork it enough, it gives up and goes slack again. If you're doing it by hand, you'll have extremely tired arms by the time you're done kneading it.
Various articles picturesquely described folding it and whacking it with axe handles or similar lethal household objects. But we at A Book of Cookrye were not about to wear ourselves out in the name of cooking when we could just turn on an expensive device and let electricity do the hard work for us. 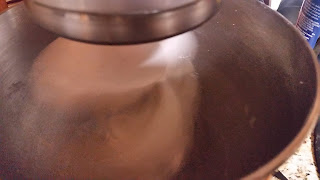 To speed things up, and because all the articles romantically described people flinging and thwacking the bread dough about, we turned the mixer speed up a lot higher than anyone usually should when attempting bread. Did you know that if an electric mixer wants to, it can walk all over the counter? As the dough slapped and whapped around in the bowl, the mixer started a moderately-paced journey across the countertop. Had it not shown an almost suicidal desire to drift toward the counter's edge, I might have let wander just to see where it wanted to go. Instead, I ended up spending about 30 minutes (really, I was checking the clock) holding the wayward machine in one place while the vibrations went from the mixer to the counter up my arm and then rattled my skull.
The dough ended up oddly creamy and spongy. I have never seen biscuit dough look like this before. It almost looks like cake batter, if cake batter could hold a shape instead of just pouring out. 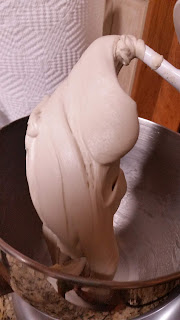 Imagine if you will an unusually soft Silly Putty. It even managed to go lighter in color than before we started the motor. Also, you can see the blisters that the original recipe said we should be looking for. 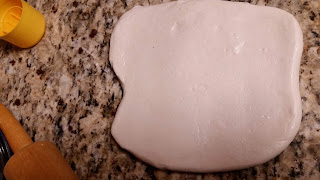 The recipe said to roll the dough out and cut, presumably in circles. Which a lot of people do, but I never liked how often you end up having to reroll the dough over and over again to make biscuits out of the scraps. So when no teacher is standing over me reminding me that I am terrible at presentation, I usually just cut biscuits into squares. They're not as cute, but you have all of your dough cut in one go. 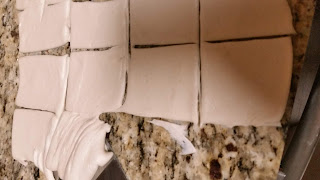 However, this dough was really floppy, and almost gooey. It was not the easiest thing to lift and put on the pan. Incidentally, I wondered if I hadn't rolled them too thin- they looked more like crackers than biscuits. So with batch #2, I stacked them two dough-pieces high to see if semi-thick biscuits were better than really thin ones.
\ 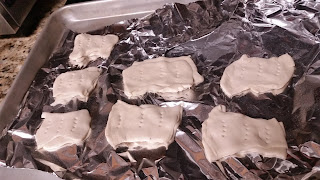 My beaten biscuits look like weird sea creatures swimming on the foil! Maybe I shouldn't have tried to roll and cut them. These are the most badly freehanded attempts at bread I have perpetrated in a long time. 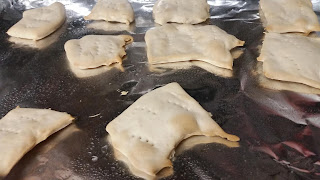 As you can see, they actually have little layers and tiny air bubbles in them! However, these took a long time to actually finish baking. The center was gummy and doughy a lot for a longer than a one-eighth inch piece of dough in the oven should be. 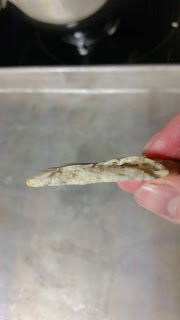 Now, we can surmise why biscuits that take multiple hours of work to make disappeared from kitchens. But I would advance the theory that they stayed out of style long after electric mixers became commonplace because, honestly, they're basically just really sturdy crackers. They're pretty good crackers, but announcing you made homemade crackers doesn't get quite the same happy reaction as homemade bread.
So, if you love making little cracker canapés but get annoyed that the crackers always break and crumble, this recipe is for you. Otherwise.... well, imagine choosing between a plate of fluffy biscuits and a plate of these. 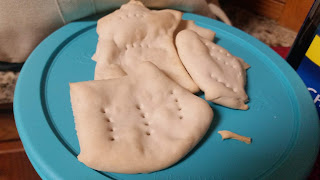