We at A Book of Cookrye were asked to make lemon squares. We had offered to cook while visiting, and our friends knew us better than to politely refrain from asking too often. However, this necessitated a brief trip to the grocery store with the cutest name I've ever said aloud: Harris-Teeter! Seriously, say it out loud to yourself a few times. It gets more funnier every time. 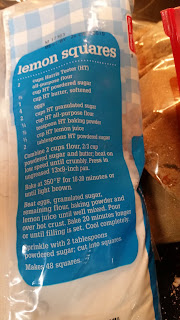 And so we begin, as so many recipes do here on A Book of Cookrye, with trying to soften butter in the microwave without melting it. 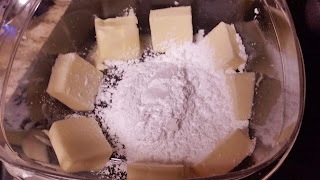 This recipe looks really similar to another recipe we've run on A Book of Cookrye: Lemon loves! Now, you might think that I'd make the recipe I've used before. After all, I am making this for friends. In their kitchen, while they can see every time I mess up. But, in my defense, this came off a Harris-Teeter sugar bag! Surely the good people at Harris-Teeter wouldn't run a bad recipe, right? (Yes, I am using any excuse I can get to say Harris-Teeter as much as possible.) 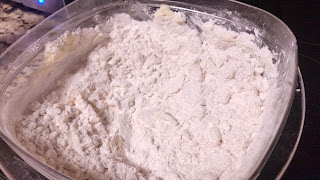 That's an awful lot of Harris-Teeter store-brand flour, isn't it? It completely covers the Harris-Teeter butter and the Harris-Teeter powdered sugar. Did I mention that I only ever buy store-brand unless there's a damn good reason not to, and that goes double when all the bags and boxes say Harris-Teeter on the front? However, I was mildly worried that this would be a really dry bottom layer to these lemon squares even though I followed the measurements on the Harris-Teeter bag.
Well, while that's in the oven, let's whisk the filling together! 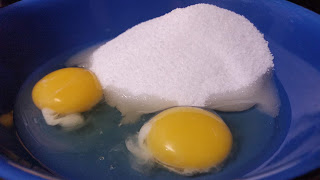 I know lemony things tend to use a lot of sugar, but that still is a huge mountain of it towering over those two eggs! 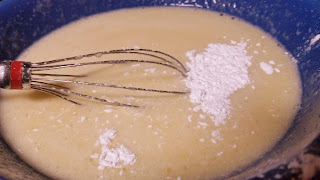 However, this recipe uses a lot of lemon juice compared to most other lemony recipes I've seen which usually will use one or two spoons, not basically two lemons' worth in one pan. It tasted like really strong lemonade. Meanwhile, the crust had finished its time in the oven and looked thoroughly desiccated. 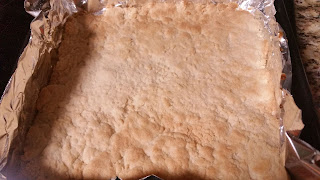 Seeing the dry, nearly-crumbly crust did not give me the highest of hopes for the Harris-Teeter recipe. Nevertheless, I dumped on the lemon filling and hoped for the best. When the timer dinged, the lemon squares were gorgeously browned on top, but cutting into them revealed that all was not right in the recipe. 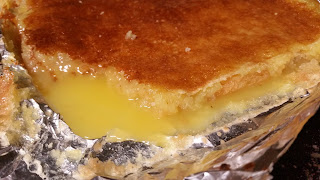 What makes this worse is that it tasted like it was supposed to be really good. The lemony stuff was deliriously tart, and the cookie crust on the bottom was really delicious. Also, the filling sitting on top of the crust soaked into it just enough to make it non-crumbly, but it was still nice and crisp. Maybe if I had a little more nerve I could try to pass these off as lemon-glazed cookies. However, no one believes you did something on purpose when they hear you muttering variations on the word "fuck" while holding a knife.
But I'm willing to cop to this failure probably being my fault. These things tend to happen when I'm cooking in front of other people, especially when halving/doubling recipes. Specifically, I think I forgot to cut the lemon juice in half, even though I remembered to halve everything else. Better luck next time, me!
Posted by S. S. at 8:40 PM