Cinnamon Buns: or, These are not what you probably think

Today on A Book of Cookrye, we are revisiting the ever-delightful "Efficient Housekeeping" by Laura Kirkman! I first saw this recipe and thought it "cinnamon buns" was a quaintly outdated name for the spiral cinnamon rolls we know and slather in cream cheese icing today. Had I read the recipe before deciding to make it, I would have known better.

If we look at the ingredients, we can see that this is not a sweet dessert item like the cinnamon rolls of today are. These look more like you would serve them with tea. I think the yeast eats the tiny allotment of sugar in the dough long before baking. (Also, a question for my fellow Americans: Did you know that most of the world thinks cinnamon rolls are a dessert?) Out of curiosity, I went to see if these made it into Laura Kirkman's only book (that I know of): Bridge Refreshments. These buns seem appropriately dainty for a ladylike bridge afternoon. However, they did not make it into the book.

It's funny how things have changed as the pandemic rolls relentlessly on. You may recall that we started saving beef fat to in the name of economizing. I even brought cow cookies to the last family gathering because beef fat was cheaper than butter (and if the recipients noticed anything different, they were too restrained to say anything). But now, that little spoonful of melted beef fat may be the costliest part of this recipe. 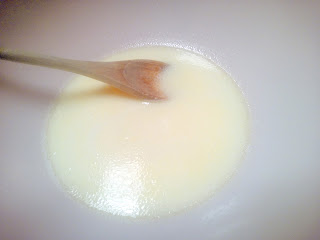 Meanwhile, we looked ahead in the recipe directions and saw that we need to turn the just-cracked egg into a beaten one. Even though a dishwasher lives in this house, I saw no need to soil a clean bowl when I could use the measuring cup that already needed cleaning. 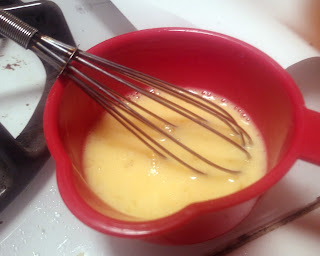 Laura Kirkman called her newspaper column "Efficient Housekeeping," and the cinnamon buns were certainly living up to the premise. Excluding the time we spent finding where the flour and cooking spray were hiding, we had the dough mixed together in less time than it takes to explain to people that these will look nothing like what they hoped for upon hearing "cinnamon buns."

However, I wish she had given flour measurements. Would if it ruin the recipe if I think a "stiff batter" looks different than she does? The next instruction is even less comprehensible. Telling us to add enough flour to make a "soft dough" is about as helpful telling someone to dress "semi-casual." I interpreted "soft dough" as "capable of holding a shape for a few seconds, but still a little gloppy." 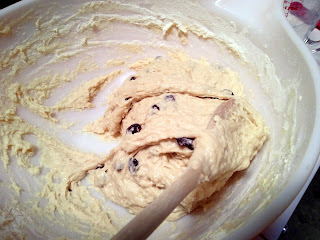 At this point, Laura Kirkman takes us to the peak of efficient housekeeping. Instead of taking the time to make a cozy nest for the bread dough so that the yeast is at its happiest, Laura Kirkman directs that we just leave the dough out on the counter and thus make bread in our sleep! Perhaps the all-day rising time compensates for the parsimonious allotment of yeast in this recipe. Leaving the dough out all day gives that tiny pinch of the yeast a long time to breed in the bread, thus allowing us to economically save most of our yeast granules for another day. Also, the longer bread rises, the more flavorful it is. Some people who are seriously into baking will special-order extra-slow-rising yeast for this very reason.

In full disclosure, we left this out over-day instead of overnight. The temperature hit an unspeakable 112° (that's 45° for our Celsius friends). Even those aggressively perky people who chirp "Don't worry, it's a dry heat!" have quietly given up and gone indoors like the rest of us. Not wanting to be behind the oven that broke the power grid, we made the buns wait until long after they were ready to bake.

The dough sat out all day, filling the kitchen with the smell of bread to come. Every time you approached that part of the house, the subtle yet persistent smell of yeast wafted to you. After always lovingly making a warm and draft-free nest for dough to rise, I didn't know if the yeast could do its yeasty business if we just left it exposed on the kitchen counter all day. But then again, you sometimes hear about discarded pizza dough rising right out of the dumpster behind the restaurant-- which suggests that perhaps yeast is more adaptable than I thought. 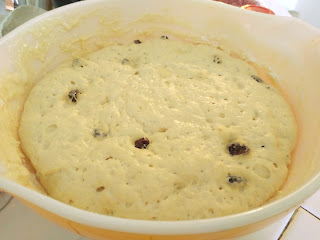 When the temperature outside finally got cool enough for the air conditioner to keep up, the dough was past its prime. I have made all manner of failed breads: tooth-breaking doorstops, gummy crackers that were meant to be neither gummy nor crackers, tough leathery bread that extracted tooth fillings, and any other type of flour-based embarrassment you can think of. Today we add a new bread failure to the list: overfermented dough. In baking class, we were warned about overfermentation caused by leaving bread to rise for too long, but I have never seen or tasted such a thing.

But after the weather was finally cool enough to bake the bread without imperiling the electricity, the dough had a subtly bitter taste to it. I don't mean a few nuanced flavor notes, the bread just tasted wrong, like beer that sat out all night. I decided to bake it anyway because it represented a costly outlay of raisins and a $90 half-tablespoon of beef fat.

Laura Kirkman only gives three words about how to shape this dough: "Form into buns." If you, the lady newsreader of 1921, don't know how to form a bun, you must have skipped home economics class and ignored your mother's kitchen lessons. In our era where cookbooks give detailed instructions and photographic illustrations, it's always a mild surprise to see a commercially-published recipe with such vague instructions. Those of you trying this at home should know that you will need a generous amount of flour on the countertop to shape these. My first, underfloured attempt looked like this: 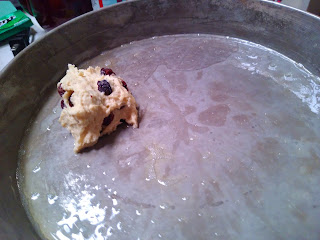 I don't mind that Laura A. Kirkman didn't give us a bun-forming tutorial, but I wish she had told us how big to make the buns if she was going to give us an exact-to-the-minute baking time. What if my buns are larger than hers and thus still doughy in the middle after the specified 35 minutes? What if my buns are too puny and turn into dried-out bread pebbles while I'm outside beating the rugs or getting arms-deep in the washtub?

Laura Kirkman tells us to place the buns "side by side" in the pan, presumably to force them to rise upward instead of outward. Not only did I do as she directs, but I had to force them to all fit in the pan. I thought perhaps shoving too many buns into too small a pan is bad baking practice, but they looked almost commercially perfect after they rose. 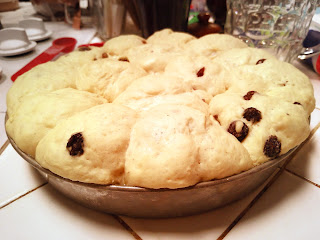 The glaze for the top is devoid of measurements, but Laura Kirkman does say to make "a paste." So, I mixed the ingredients to be just thin enough to spread onto the buns without squishing and deflating them. As another recipe note, I added a tiny pinch of salt because the topping tasted rather bland. It really brought out the flavor and turned it into a bowl of delicious cinnamon-buttery goodness. Unsalted butter was still a rarity when Laura Kirkman was writing "Efficient Housekeeping" columns, so I don't think I was correcting a flaw in her recipe so much as adapting it to the contents of a refrigerator from this millennium. 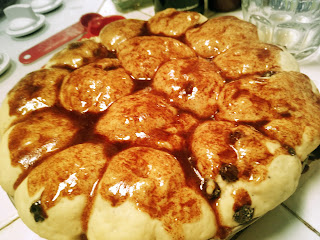 I also used only half of the glaze I made because it looked like any more would boil over and char on the oven floor. This proved incorrect; the cinnamon mixture soaked into the rolls as they baked and left (as promised) a glaze that formed as the heat dissolved the sugar. I should have just dumped all of the glaze on them so it could soak into the rolls and imbue them with even more cinnamon flavor. Since we now know that the buns absorb the glaze like little cinnamon sponges, we will be more generous with it next time. I should also note that the original recipe makes a lot of cinnamon buns. This pan is only a half-batch. 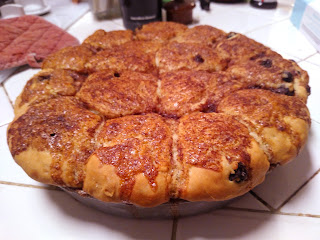 At the point where we were about to finally taste the (possibly overfermented) cinnamon buns, we got a rude interruption of the recipe test. Others in the house had reached the end of a more stressful day than mine, and therefore our supper plans were replaced with pizza delivery. To the ruination of an impartial tasting of the cinnamon buns published in "Efficient Housekeeping," an order of prefabricated cinnamon rolls was also obtained.

With that said, these very good. But even if you gob on the white icing, these are not cinnamon rolls, nor are they trying to be. They tasted almost exactly like the panettones that show up in drugstores every year- except with raisins instead of those waxy fruit pieces. These would be right at home with a pot of tea. 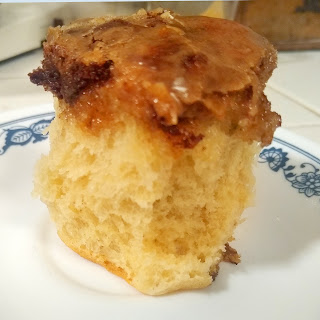 With that said, this is not a sweet bread at all. You may have noticed that we're barely adding enough sugar to keep the yeast in the dough happy and lively. In this millennium, it's a very out-of-our-time experience to eat bread that is glazed on top like a dessert, but it is not a dessert. I almost want to say this recipe seems to come from a different country altogether, but it was published in a syndicated American newspaper column.

Everyone liked them, though it was mentioned that I ought to pour cinnamon icing on them after baking. As someone else phrased it, "The bread is a perfect foundation but it needs a little more on top." This is the first time anyone has specifically requested an icing by name. What could I do but give in to the demands of the adoring public?

But as good as these are, they are very rich. One or two of them will sate you. So, while these were delicious, we had a lot of leftovers- and these go stale very quickly. After slicing the buns horizontally, they made some fantastic French toast. Purely for the heck of it (and because the pan was already hot), I went ahead and dumped the slurry of batter and crumbled bread onto the pan with it. It turned into a pretty decent pancake. 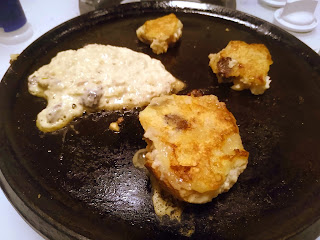 I know a lot of us say "this bread makes good French toast" when we're trying to come up with a way to avoid putting rock-hard bread into the trash can, but Laura Kirkman's cinnamon buns have the perfect flavor and texture for this. 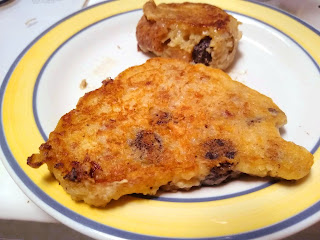 With that said, this is a delicious bread recipe. You know it's good because I've already made it twice.