Beef Curry from the perfect cookbook for my relationship history

Let's hear it for single-person cookbooks! It's hard to write one that doesn't come off as a joke. Any cookbook about cooking for one tends to come with merciless cracks about how lonely the purchaser's life must be. They often end up as gag gifts for anyone whose friends or "loving" family wish to remind them that they remain unmarried. Most of them even take a slightly defensive tone, arguing that creative cooking shouldn't be the exclusive territory of people with someone else to feed. Indeed, the most famous cook-for-yourself book (well, as famous as a cookbook can get without a television endorsement) was gleefully re-shared by people calling it "the saddest cookbook EVER!". To be fair, when you write a book called Microwave Cooking for One, it's hard to imagine any other reception.
Which brings us to the cookbook from which we pull today's recipe, which is called... 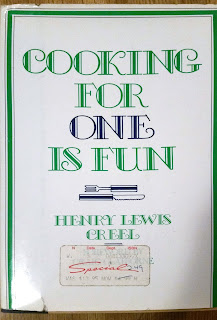 We would like to give a Hat Tip of Cookrye to the wonderful site Awful Library Books, who featured this book quite some time ago. No, this is not a paid endorsement. The people behind that site have never heard of us, and certainly have never contacted us to advertise them.
If you are amused at seeing the long-buried craft trends of yore, sex manuals of the 1930s, creepy self-published books (like how to meditate your breasts bigger), and other things that either should never have been on library shelves or should have been removed a long time ago (no one's child today is going to need picture books about the USSR), this is the site for you.
Anyway, they posted this book and we thought "Actually, this doesn't look so bad!" And so, repairing in haste to every cut-rate book website we thought might have it, we ordered a copy. So, today we are making.... 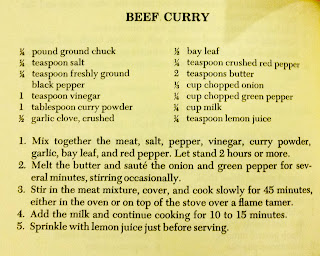 For anyone who wants to rush in and point out that this is ABSOLUTELY NOT  a True Authentic Recipe from India, let's look at the first word in the recipe name and the first ingredient on the list. Of course this recipe's American. It has beef. So, having acknowledged that sampling this will not transport you back to that one lunch cart on the sidewalk when you backpacked through New Delhi, let's bust out the curry powder!

This is the first recipe I've seen where you marinate ground beef. Is this really that rare a technique, or is this because I tend to flip right past the meat chapters of most cookbooks because steak is expensive? Anyway, this was a perfect time to use up the last of this packet of curry powder that has incrementally gone into various pots of stuff for a while. 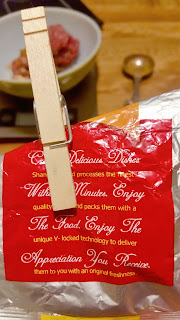 A lot of people criticize cookbooks from the 1930s to the 1980s as being hopelessly bland. Like, people suddenly were afraid to use any more seasoning than a tiny pinch of pepper (and maybe a half-drop of Tabasco if you were really daring). However... well, look at how much stuff we've shaken all over this tiny dose of meat! 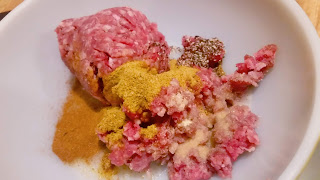 It turns out this recipe uses about enough beef to make one of those oversized burgers you find at nearly any burger seller that uses the phrase "all-American" in their advertising. And so we left it to sit for the requisite time. Sharp-eyed readers will notice that we actually bought a kitchen scale. It turns out most of the recipes in cooking school go by weight, and so to practice at home we had to make the investment. It still feels weird having one stashed in the cabinets. 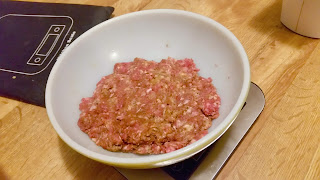 Now, this recipe calls for a fair amount of chopped vegetables. We at A Book of Cookrye were far too lazy to bring out the knife. 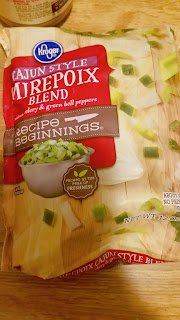 An interesting shift in recipes: for the longest time, butter was the fat of choice when pushing things around in a frying pan. It wasn't until surprisingly recently that oil became the default choice. In case it makes a flavor difference, who are we to argue? 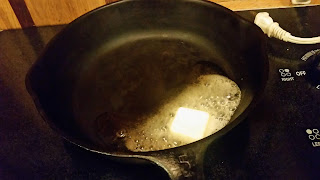 I know we're making Indian(ish) food, but all these vegetables frying in a pan of spattering butter make this recipe look and smell like it came out of a Junior League cookbook from some place like Puskahossee, Alabama. 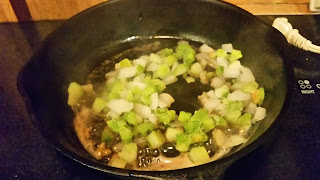 At this point I'm reminded of one of my Indian friends who always made food from home instead of American things. She was chopping a lot of onions while muttering how she hates them and why does all Indian food have onions in it? Someone else asked her why she didn't just leave them out, and based on her reaction we may as well have shown her this.

Right, let's get back to the fragrant frying pan! The vegetables have gone from
frozen to quite dead. 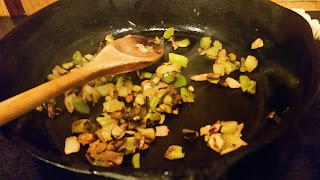 Speaking of things you can't do in India, let's add a lot of beef to the pan. If you think I'm joking about what you think are outdated food laws in other countries, a quick online search will show you that beef is still illegal in most of India. 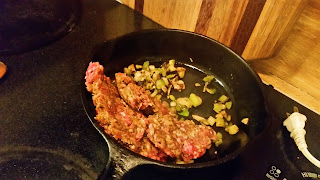 I will say that however inauthentic this recipe may (probably) be in most ways, they definitely nailed one part. The smell coming from the pan, while absolutely tantalizing (if you like curry), was so powerful that the exhaust fan could not keep up. Coming from a college with a large south Asian population, it was very common to see box fans propped up in many campus apartment windows while the smell of curry gently wafted to the sidewalk below. Indeed, the smell coming off of this one tiny pan (we're cooking for one, remember?) took over the house very quickly despite the kitchen fan doing its damnedest to sent the vapors up the duct. 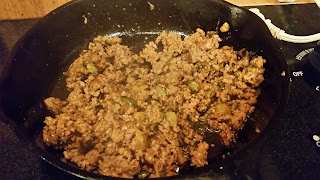 Note also how all the vegetables have by this point shrunk and shrivelled to be near-imperceptible. Anyway, I found this next line of instruction odd. At this point we're supposed to cook it slowly for 45 minutes. Granted, maybe we weren't supposed to thoroughly cook the beef and then give it the 45 minutes the recipe tells us to. But to us, putting the raw beef in the pan and leaving it untouched to cook for that long made no sense. You'd end up with a big beef slab just sort of sitting in the pan. Well, part of exploring new recipes following instructions that make no sense. And so, this happened for 45 minutes. Note our absolutely excellent choice of lid. 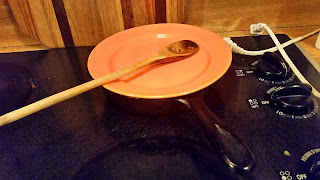 One nice thing about a recipe that has so many hours of downtime: you won't have a pile of dirty dishes and spills on the floor waiting for you. Between the 2 hours of marinating and the 45 minutes of more or less abandoning this on the stove, the kitchen was spotless. Dinner's always nicer when you don't have to stare at the impending cleanup while you eat.
Anyway, now that we've scoured the kitchen, let's get back to the pan! As we thought, our once-perfectly-good meat had become dried out and sad. Have you ever just let a pan of leftover meat sit out overnight instead of packing it away? You know how it always turns into meat husks? Well, that's what I was looking at. 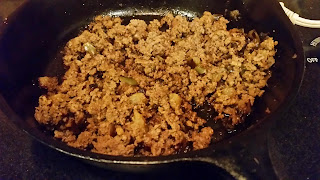 This is an odd recipe. First you make your dinner look like you left it on the back of the stove and forgot about it (which you kinda did), and then you reconstitute it- with milk.

If you stirred it, it looked like a pan of beef Stroganoff. This was a slight improvement, but offered no reassurance. 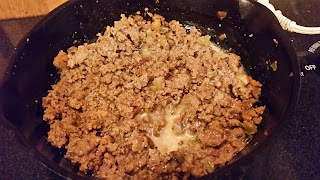 You will be glad to know that after its second long simmering, the pan of stuff looked normal. You'd never guess that we'd dried the beef out and then re-watered it with milk. Did that extra step change the flavor at all? I don't know, but feast your eyes upon the glory! 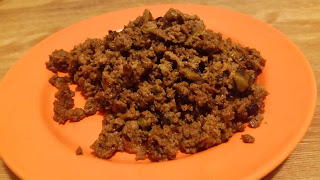 Actually, I shouldn't kvetch about the cooking time. Yes, it was like 3 hours from start to finish, but most of that time was just leaving it alone, whether marinating or on the burner. So it's not like you need to stop absolutely all other things and confine yourself to the kitchen while you embark on this hours-long project. You can prune the flowers, practice your harpsichord, get groceries, buy a box fan to put in the kitchen window if your vent hood is no match for curry... the possibilities roll out tantalizingly before you.
However, when you eat the resulting mound of meat, you'll notice that nowhere in the recipe do you drain off the fat. Behold the grease plate! 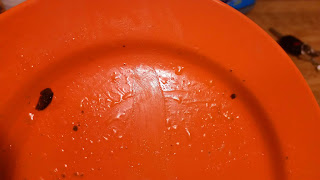 I couldn't finish this at once, the grease was too much. I'd suspected that the portions in a cooking-for-one book would be puny. I did not expect leftovers. But speaking of grease, check out how much congealed in the bottom of the container. 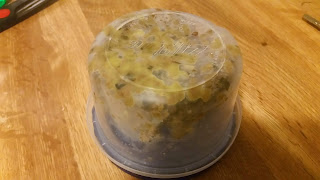 The solution to this: Well, what appears on every Indian friend of mine's dinner plates next to the main dish? Rice! In theory, if we just cooked it plain (no butter or salt), the fat from the meat would coat the rice and all the seasonings would flavor everything. 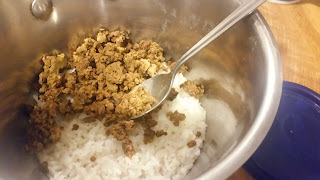 And indeed, once all of this got stirred together, it was perfect! I mean, you had to mentally reconcile yourself with the fact that you were flavoring your rice with a mixture of butter and beef drippings, but once you got over it, this was really good. 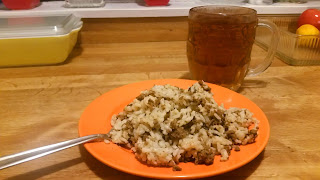 Actually, you know what this tastes like? Well, a great-uncle worked in construction when he was younger and often came home late. His mom (my great-grandmother) would leave a big portion of whatever they'd had for dinner in a skillet on the stove. That's what this tastes like. This is not dinner, this is something left on the back burner to wait for you no matter how late you get home. Like, there's not even a note saying "Supper's on the stove" because you already know it'll be there.
Posted by S. S. at 12:16 AM